[Photos] How Fire Tender Stucked In A Gutter Blocked Another Tender; 4-year-Old Boy Burnt To Ashes In Nyinahin 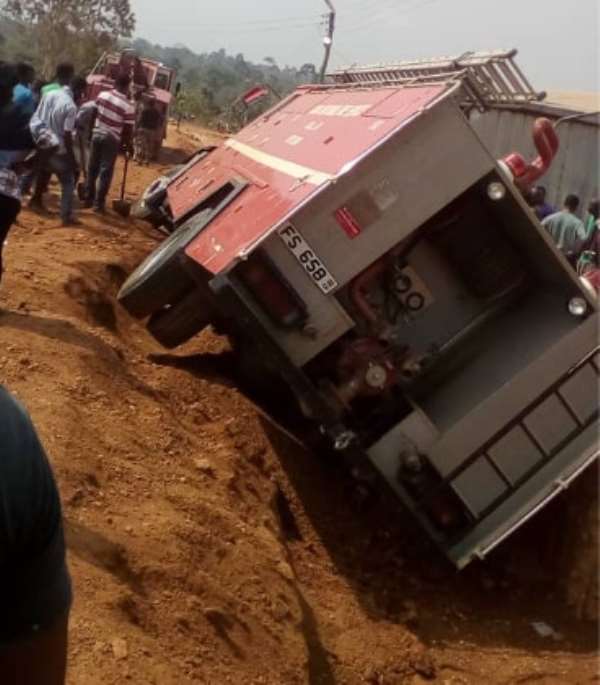 Indigenes of Salem, a suburb in Nyinahin are still counting their loses as raging fire destroyed an entire house and killing a 4yr old boy in the process.

The fire which started around 10pm on Wednesday destroyed properties worth thousands of Ghana Cedis on that fateful night.

With the Fire Service yet to reveal what was the cause of the inferno, it is believed the doom started when all and sundry were asleep but one, Mrs. Marie Osei a tutor of Nyinahin Catholic Senior High School who was at her church when the fires started lost his son, Kobby in the process.

Eye witness put it that, in the heat of outright pandemonium, the 10-year-old elder brother of the deceased was able to rescue his immediate sibling from their room only to return to see the fires preventing him from assisting his junior sibling to get out of the conflagration; hence the inevitable.

To compound the misery of the affected tenants, the District fire tender that was speeding to the scene to rescue or ameliorate the situation had their car run into the gutters of the ongoing road construction by the Sinohydro Company blocking the only accessible route for the Fire tender called from Bibiani to help. This scenario caused the fires to consume the entire house while onlookers stand aloof helplessly.

The charred body of little Kobby was whisked to the Cemetery as Police and the Fire service investigate what caused the fires.