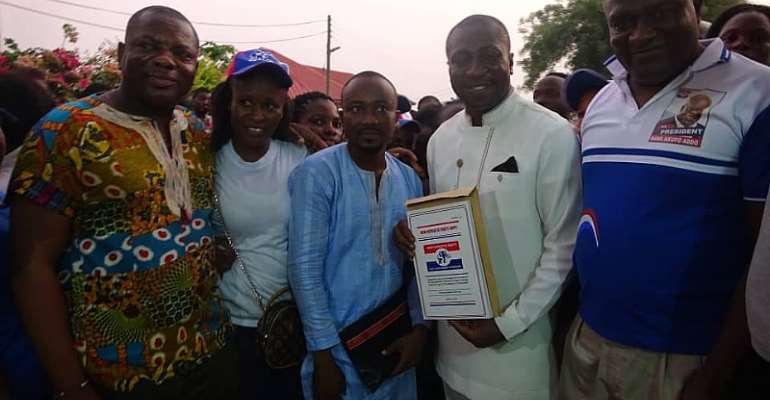 Friends of the Member of Parliament for Effutu, Alexander Afenyo Markin and some other known NPP groups came together and picked nomination forms for the Effutu legislator on Monday.

Micheal Gyan, President of Friends of Afenyo Markin indicated that his good work is what informed their decision to buy the forms for him.

“We believe in the good works that he is doing so delegates, friends, Assembly Members and Party faithfuls decided to pick the forms for him to continue with his good works”

According to Michael Gyan, the Effutu constituency is a no go area for other incoming candidates since the incumbent Member of Parliament for the area has not finished with his good works.

Constituency chairman for the New Patriotic Party, Kojo Halm indicated that there was a clash between some party members over who should buy the forms for Afenyo Markin adding that in the end the NPP became victorious.

“There was a bit of a tussle over who to buy the forms for Afenyo Markin so in the end, John Bondzie Sey paid for the filing fee of 20,000 and this is unprecedented in the history of the party in Effutu and this should tell us that the party is indeed strong in Effutu, ” Kojo Halm said.

However, the Member of Parliament for the Effutu constituency Alex Afenyo Markin in his response to the surprise by party members in Effutu indicated that he will take up the challange of leading the party again in the 2020 Parliamentary elections.

According to him, the National Democratic Congress has no message for the people of Effutu in the 2020 elections and called on all Ghanaians to vote for President Akufo-Addo to continue with his good work.

“Let us work hard, let us go to every community because the good news in Effutu is that every community you enter we have done a project there and people can testify of the hard work,” the MP added.

“I have taken up the challenge, I am ready to lead so I will go and fill the form and contest,” Afenyo Markin said.