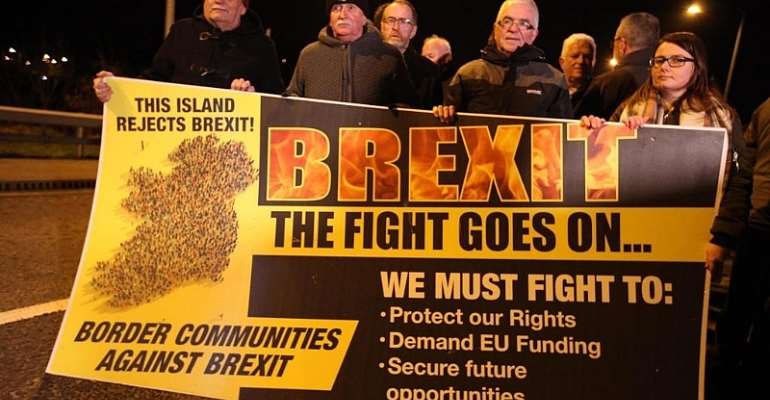 On Saturday, February 1, the United Kingdom is no longer part of the EU. Hardcore Brexiteers celebrated noisily in London and other places, but small groups gathered at the border between Northern Ireland and the Irish Republic for mutual consolation.

One phrase that was persistently mentioned by many revealed a side-effect London did not count on: an increased call for Irish reunification.

“I've been born and reared along the border,” said Declan Fearon, a man in his late sixties, and chairperson of the lobby group Border Communities Against Brexit (BCAB).

“I lived through all the excesses of the troubles that came about because of how the border divided the community here. I know what it has been like. And I'm here to ensure that this legacy is never left to my grandchildren,” he added.

It is 9:45 pm, 31 January, the night before Brexit. A group of some 100 people, braving the cold and drizzle, congregate on a flyover that marks the border between Northern Ireland and the Irish Republic near the town of Carrickarnon.

Some oare holding posters saying: “No Border in Ireland,” “56 Percent in the North Voted Remain” and a large, printed one with the word “Brexit” in flames, saying that “the fight goes on.”

The meeting near Carrickarnon is one of six organized by BCAB. Others take place at the same time in border communities in Aughnacloy, Aghalane, Blacklion, Lifford and Bridgend.

The protesters huddle together on one half of the road, leaving the other half open for traffic. The mood is one of resignation.

Silver lining
But while demonstrators seem to have grudgingly accepted Brexit as a new fact of life, many start to the search for a silver lining.

And an often heard conclusion is that Ireland should be reunited.

“We are deeply concerned,” Andree Murphy, of the civic group Ireland's Future who came down from Belfast to be at the event, told RFI.

“After three years, we can see the Good Friday Agreement (that brought peace after decades of civil war in Northern Ireland) being undermined, and we are calling for a border poll to re-unify the island of Ireland,” she said.

“One good thing coming out of Brexit is that it brought a united Ireland closer than what we have seen in a long, long time,” added Tom Cunningham, an Irish fisherman. He said he had attended the gathering to show his solidarity with Irish people in the north.

Under the revised Ireland Protocol of the Withdrawal Agreement, that was published by the European Commission on 17 October, 2019, articles seem to indicate a border between the EU and the UK will be positioned north of Northern Ireland, eliminating fears for a “hard border” on the island.

Not perfect
Fearon reluctantly accepts the idea. “It is not perfect for a lot of people who do business and have to go up and down to England, it would have been better that there be no Brexit at all.

“However if there is going to be one, then yes, that border in the Irish Sea is where it should be and where it always should have been.

“This border was imposed on us over a hundred years ago and we are still suffering from the ramifications of that.”

Future relationship
But at this moment, nothing is clear, as negotiations between the EU and the UK over a future relationship that will also conclude the fate of Northern Ireland are yet to start.

So how will Fearon spend his first post-Brexit day?

“No differently from any other day,” he says, “I'm just resolved to make sure that this doesn't harden the border in any way and that we can, one day, become re-united and be part of the EU again.”

At 10 pm, the drizzle becomes more intense and most activists call it a night, taking their boards and slogans with them and disappear, not interested in waiting to mark the 11pm deadline when Brexit becomes official.