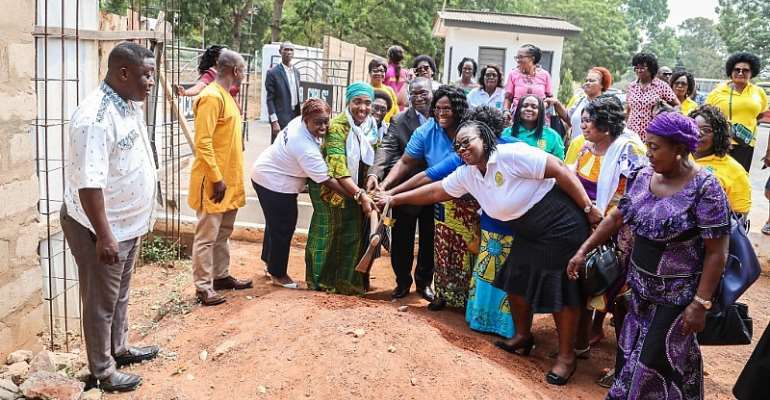 The Zongo Development Fund (ZoDF) has committed an amount of GH¢145,000 for the construction of the main gate for the Accra Girls' Senior High School, which is located within the Nima-Mamobi Zongo Community.

The project, when completed—is expected to boost security at the school's main entrance and also provide a befitting façade to the school which will be celebrating its 60th Anniversary in September, this year.

The Deputy Chief Executive Officer of the Zongo Development Fund (ZoDF), Hajia Aisha Salifu, an old girl of the school, on Tuesday, cut the sod for the commencement of the project which is expected to be completed between three to six months.

Speaking about the gesture she said “it is a way of giving back to the school that has over the years continued to provide quality education to predominantly young Muslim girls from the Zongo communities.”

Sharing her experience as an alumnus of the school, her enrolment date being 1972 and completion 1977, she recalled that there were six Muslim students in her days—a sharp contrast to today's picture of countless numbers of hijab-wearing Muslim girls who thronged the school premises as students.

The strategic location of the school, she also said, made it incumbent on the fund to support it.

She encouraged students from the Zongo communities to stay focused as she said “I stand here as a symbol of hope for you to look up to, that yes, you can start from here and end up higher than you can imagine through perseverance.”

She hinted that critical educational infrastructural projects are set to commence across the country as soon as evaluation and validation were completed within the next couple of months.

“We haven't broken ground for any of the schools' projects yet, most of the regions have been validated except Upper East and Upper West and Bono regions,” she said.

The headmistress of the school, Joyce Acolatse expressed her appreciation to the Accra Girls Old Students Association (AGOSA) 1977 group, who tabled the proposal to the ZoDF which was the first government agency to aid the school apart from the Ministry of Education (MOE) and the Ghana Education Service (GES).