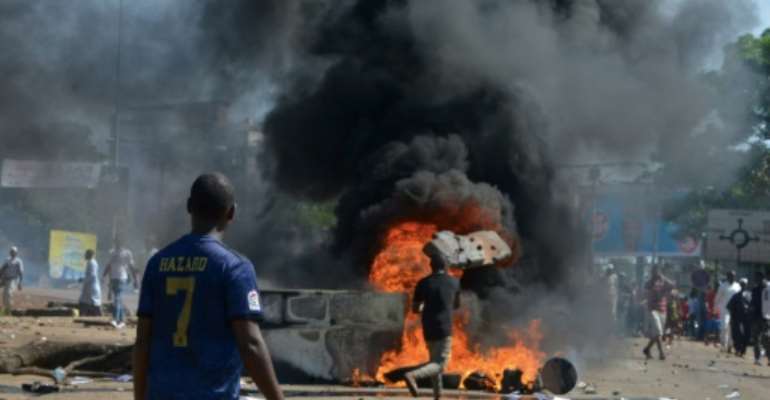 Guinea's President Alpha Conde is set to hold a constitutional referendum next month, government sources said, despite protests led by an opposition alliance fearful that the poll is a ploy to enable him to stay in office.

The announcement of a referendum date is likely to further heighten tensions in the West African nation of 13 million people, most of whom live in poverty despite considerable mineral resources.

On Thursday, three people were killed in clashes with security forces in the opposition stronghold of Labe, the city's mayor said.

At least 26 civilians and one gendarme have died in protests to date, according to an AFP tally.

The referendum may be held simultaneously with parliamentary elections on February 16, a source close to the president's office told AFP Thursday, asking not to be named.

The cabinet asked Conde, 81, "to fix an appropriate date for holding the referendum", the government said in a statement late Thursday.

"This electoral timetable will be the object of a presidential decree," it said.

Former prime minister and opposition leader Sydia Toure also said the government is moving towards "coupling" the parliamentary election and the referendum.

He told reporters on Friday that the cabinet statement "was a sort of throwing petrol on the flames."

Guinea has seen major demonstrations against Conde's rule since mid-October, with a harsh crackdown.

Jailed under previous hardline regimes, Conde became Guinea's first democratically- elected president in 2010 and was returned to office by voters in 2015 for his second and final five-year term under the current constitution.

When he announced his plan of putting a new constitution to the electorate in December, the opposition voiced suspicions he sought to start his time in office afresh with an election late in 2020.

A draft constitution presented in December still limits the number of presidential terms to two.

Critics argue, however, that a new the constitution would reset the term counter to zero and allow Conde to run a third time.

The president has neither confirmed nor denied claims that he intends to run again.

He has simply argued that laws from the French colonial era need to be amended, with no reference to the presidential mandate.

Tens of thousands of people have been called out on the streets against a possible third term by an alliance of opposition parties, trade unions and civil society organisations.

In an increasingly tense political environment, opposition parties have promised to prevent parliamentary elections in February from taking place.

The main coalition of opposition groups behind the protests has also called for open-ended demonstrations and urged companies to suspend activities in the country.

Neighbouring countries are monitoring the situation closely, fearing an escalation.

Their eye is also on neighbouring Ivory Coast, where similarly, it remains an open question whether 78-year-old president Alassane Ouattara intends to pursue a third term this year.

Conde on Thursday ordered his security and justice ministers "to take all necessary steps to restore peace and security in the zones that have been affected in the past few days by acts of disorder, looting and vandalism."