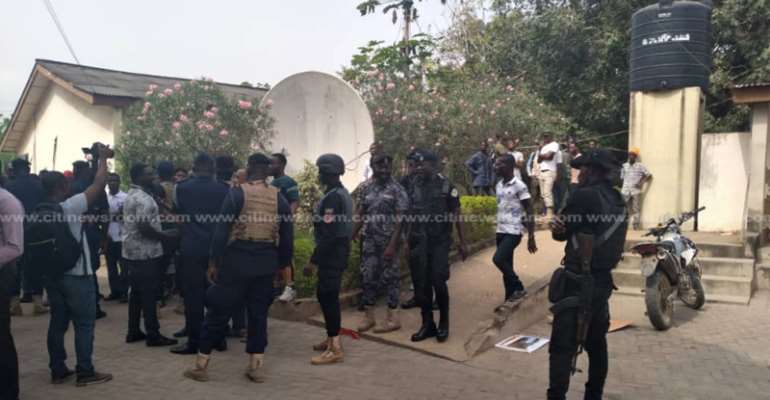 Three persons were arrested and detained by the Amasaman Divisional Police Command in the Greater Accra Region for their involvement in the protests at the GA West Municipal Assembly officer today, Thursday.

During what the police have described as “rioting”, scores of New Patriotic Party (NPP) foot soldiers demonstrated to demand the removal of the GA West Municipal Chief Executive, Clement Wilkinson.

The demonstrators were upset with the persons listed to be government appointees on the assembly and accused the MCE of not toeing the party line by not ensuring consensus NPP members were placed in the assembly.

There are 25 assembly members, 17 of whom are elected and eight which are appointed by the government.

The protest came as newly elected Assembly and Unit Committee members across the country were being sworn in.

Police arrived on the scene to disrupt the protest because it was illegal as the demonstrators had not sought prior permission.

The Amasaman Divisional Police Commander, Chief Superintendent Christopher Klomega, told Citi News “most of them were still very recalcitrant and chanting war songs” when police tried to calm them down.

“Since they did not take the police advice, those who were misbehaving were arrested. So far three people have been arrested and detained,” Supt. Klomega said.

Following the claims by protestors, the MCE, Clement Wilkinson, said he was ready to engage the aggrieved persons.

“If they aren't getting things right, I'm the MCE, they can come to me and we can [iron things out] and move forward… engage everybody,” he told Citi News.