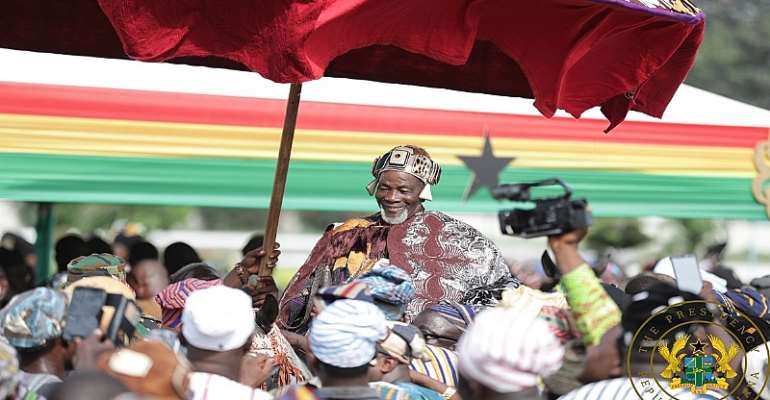 The dividends of peace are pure and varied. Among these are development and freedom which war and strife do not bring.

The ambience at the Jubilee House on Thursday when the King of Dagbon descended upon the place with his large retinue of subjects was a rekindling of the threatened culture of the Dagbanba.

Had it not been the state of 'war', which remained in the horizon in this part of the country for a little longer, some aspects of the cultures of the people of Dagbon would have been confined to the annals of history meant for reading and not for enactment.

Long after the king had left the Jubilee House after turning up to express gratitude to the President for championing the cause of the peace process, the subject remained in the memories of Ghanaians; some of them beholding the beautiful spectacle on their television screens.

Never again should chieftaincy strife be allowed to take centre stage in the affairs of Dagbon and destroy lives and cultures.

Without doubt, development has started taking root in Dagbon because peace has given way to strife. Let other parts of the country learn from the experience of the once restive traditional area and shun the antiquated chieftaincy disputes which are anything but counterproductive.

It is only when peace is restored that residents or even those who took part in the strife discover the uselessness of their bloody engagements.

Learning to manage our disputes without resorting to physical attacks and destructive tendencies is the way to go.

The Ya Na's promise to work towards enhancing the peace restored sounds musical; we do not doubt his ability to walk his talk because he is a king whose word is sincere.

He raised an important issue during his engagement with the President and it was about a seeming stalemate at Nanton, one of the areas under his jurisdiction.

If the Dagbon issue was amicably resolved, the Nanton one is but a small matter which can easily be dealt with.

Although a relatively miniscule matter left alone it could explode and like any typical fire spread to other areas. This we abhor and would take this opportunity to plead with the President to, like he did with the major challenge of Dagbon, engage some prominent chiefs from other ethnic groupings to mediate in.

Somebody is said to have occupied the skin without the nod of the king. The bad blood originating thereof should be dealt with without delay.

The king needs the peace of mind to lead his people and so should not be saddled with small yet worrying side problems such as the ones he mentioned to the President.