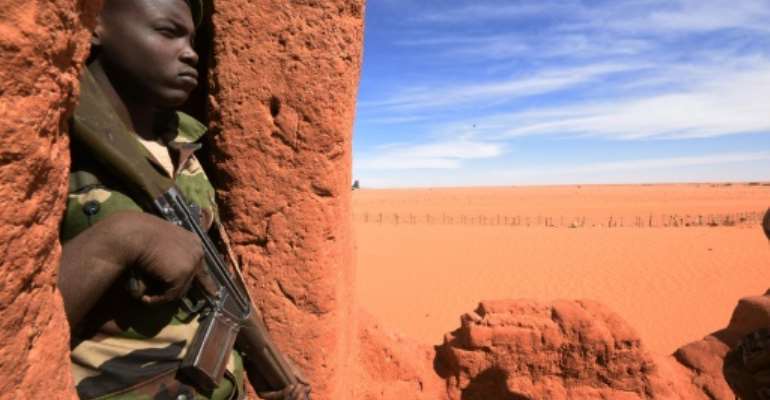 Sahel and African nations have long been at the sharp end of Libya's crisis. By DOMINIQUE FAGET (AFP/File)

Victims of increasing jihadist attacks, African states bordering Libya are pushing for more say in efforts to end the crisis in their northern neighbour whose conflict risks becoming a growing source of regional instability.

European powers, Turkey and Russia will join a Libya peace conference in Berlin this weekend, the latest international effort to end fighting between eastern commander Khalifa Haftar and the UN-recognised government in Tripoli.

African Union Chairman Moussa Faki will also join the Berlin talks hoping to bring a focus on the continent's perspective, but it will not be an easy mission.

"The neighbouring countries like Chad, Sudan, Algeria, Tunisia, Egypt, fellow AU members and beyond are suffering the consequences" of the crisis, said Ebba Kalondo, Faki's spokeswoman.

Sahel and African nations have long been at the sharp end of Libya's crisis.

After the NATO-backed rebellion ousted and killed dictator Moamer Kadhafi in 2011, Libya collapsed into a conflict of competing armed factions vying for control.

In the chaos, Islamist militants and migrant smugglers expanded their influence.

Libya's security vacuum allowed the spread of fighters, arms and explosives across its borders into Mali, Niger and Burkina Faso, which face increasing jihadist violence despite a regional campaign to counter Islamist militancy.

The North African state remains in chaos, mostly split now between Haftar's forces in the east and the UN-recognised government in Tripoli. Haftar's forces launched an offensive on the capital in April.

"The international community is responsible for what is happening to us through its disastrous decision to intervene in Libya," Niger President Mahamadou Issoufou said in December, referring to the 2011 NATO campaign.

"Libya is African, we cannot solve the Libyan problem by keeping the AU on the sidelines," he told AFP.

"Libya's chaos... remains the main source of destabilisation for the whole of the Sahel," he said in Rome in December.

In 2019, jihadist attacks killed 4,000 people in Burkina, Mali and Niger, despite the presence of several thousand French troops, a UN peacekeeping mission in Mali and the G5 Sahel cooperation among the armies of five regional nations.

"Africa is looking to get more of a hearing now with the deterioration of the security situation in the Sahel," a Western diplomat said.

One sign of possible increasing African involvement is that the African Union's Libya committee, inactive for months, has been back in session in recent weeks led by Congolese President Denis Sassou Nguesso.

"Libya is an African country and the victims are essentially in Africa. So any strategy to end the Libya crisis that marginalises the African continent would be ineffective and counter-productive," Sassou Nguesso said earlier this month.

Fighters loyal to the UN-recognised Libyan Government of National Accord (GNA) have been battling Haftar's forces since April. By Mahmud TURKIA (AFP)

An emissary of the Congolese head of state this month travelled to Algeria, a key country in negotiations between Libyan rivals, to discuss how to "energise" the peace process, the Algerian presidency said.

The Algeria talks also discussed the role of AU on reviving Libya's peace process. Algiers has been long been involved in negotiations with Libyan factions.

But the UN is organising the Berlin talks and takes a central role in negotiations.

"This is and remains a process that is in UN hands and under UN leadership. So this has meant that the AU has been sidelined," said Claudia Gazzini at International Crisis Group. "The UN does not necessarily see the AU as a decisive voice in the process."

The AU push for more say comes as Libya's conflict has already split North African and Middle Eastern states between those who back Haftar's forces who control the east near Egypt and the government of Fayez al-Sarraj, recognised by the UN and based in Tripoli.

But the AU is also "divided" over how to handle Libya, one Niger official source said.

"Egypt does not want the AU to take charge of this," as it backs Haftar as sees Libya as part of its domestic security border, the source said.

That situation has been further complicated by the entry of new international players. Russia backs Haftar while Turkey, an ally of the Tripoli government, recently agreed to send Turkish soldiers to Libya to support Sarraj.

Haftar's offensive on Tripoli since April is just the latest wave of fighting to wrack Libya since 2011.

More than 280 civilians and 2,000 combatants have been killed since Haftar's assault began, according to the UN. Some 146,000 Libyans had to flee the fighting.

A cessation of hostilities has been in effect since Sunday. But Haftar has so far refused to sign a more permanent cease-fire deal initialed by Sarraj.

BoG, IGP clash over attack on bullion vans
13 minutes ago