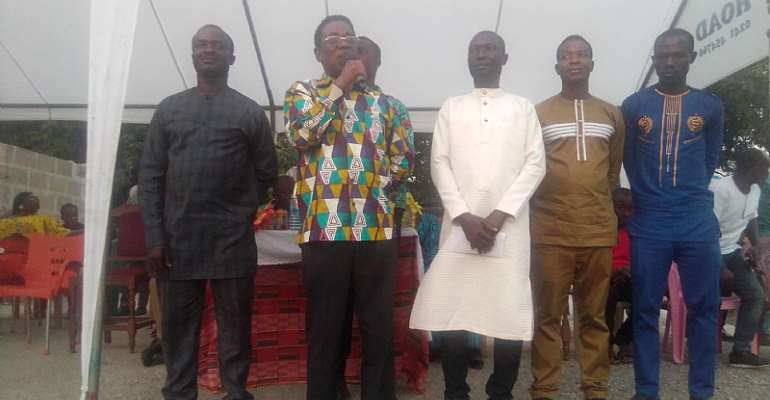 Minister of State In-charge of Tertiary Education, Professor Kwesi Yankah has hinted that Agona East District of the Central Region was going to experience more infrastructure development to improve the lives of the people.

According to Professor Kwesi Yankah, Government has put in place achievable measures to ensure infrastructure development in the Agona East District adding the District has been in distress in terms of infrastructure.

Addressing the Chiefs and People of Agona Kwesitwikwaa popularly known as 'KTK' to climax their annual Akwambo Festival last Sunday, Professor Kwesi Yankah hinted that more Roads Network were going to be reconstructed and reshaped in the district to enhance smooth transportation of goods and services.

He mentioned the Road linking Agona Asafo to Kwesitwikwaa as one of priority roads to be reconstruction and tarred afterward.

Professor Kwesi Yankah who is also the NPP Parliamentary Candidate for Agona East Constituency for the upcoming December 7, 2020 Presidential and Parliamentary Elections noted that His Excellency Nana Addo Dankwa Akufo Addo President of the Republic of Ghana was committed towards roads improvement in the Agona East District.

" Apart from roads, contract have been awarded vto contractors for Fifty-Five (55) Communities in the Agona East District to be connected to the National Grid. Work has already started in Eight of the Communities and it is expected to be completed in four months.

These communities have never ever used electricity before since world creation but are going to enjoy electricity supply for the first time in history.

The NPP Parliamentary Candidate stated his readiness to spearhead total development of the Agona East Constituency calling on the people to rally behind him and NPP Government by voting massively for Nana Addo Dankwa Akufo Addo as President and he as Member of Parliament for Agona East.

" Long before I joined Politics, I had contributed significantly to better the lives of the people. Classroom Blocks have been built for a sizeable number of communities while scholarships and financial assistance has also been given to hundreds of students at the Tertiary Education to complete their various courses"

According to the DCE, the Agona East District has been adjudged the overall Best in infrastructure development in the the Central Region lauding Professor Kwesi Yankah for his positive contributions towards the success story.

" Professor Kwesi Yankah has been the pillar behind the Assembly's brilliant Performance over the last three years.

Am amazed at his humanity. He is a down to earth man who is ready to Serve the people in Agona East.

Chief of Kwesitwikwaa, Nana Kwesi Twi VI, lauded Professor Kwesi Yankah for his inspirational leadership praising him for a Classroom Block being constructed for the local Basic School to ease congestion at the classrooms.

He appealed to the contractors working on the roads in the vicinity to ensure early completion of the projects to cut cost of transportation.

" Due to bad roads, we have been compelled to motorbikes known as 'Okada' as our means of transportation. It is very risky but we have no alternative" Nana Kwesi Twi IV lamented.