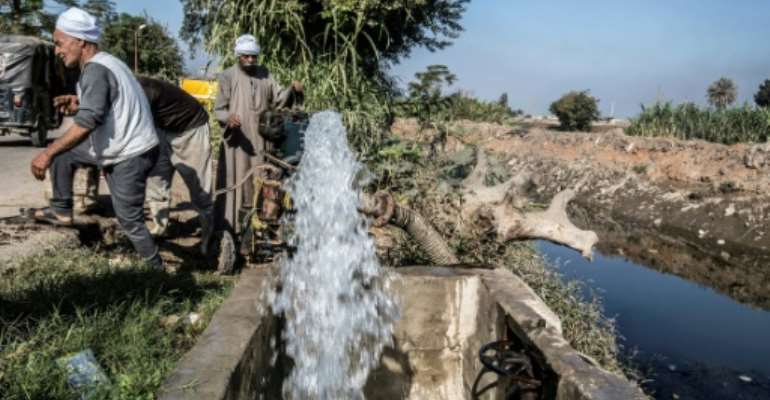 Egyptian farmers supply their farmland with water from a canal, fed by the Nile river, in a village outside of the capital Cairo. By Khaled DESOUKI (AFP/File)

Progress towards a final agreement between Egypt, Ethiopia and Sudan over what is set to be Africa's largest dam has eased tensions around Addis Ababa's mega-project on the Nile.

Egypt released a statement Thursday toning down years of rhetoric and suggesting a conciliatory approach ahead of a final accord.

That came shortly after the three countries announced a meeting in Washington on January 28-29 to finalise the deal.

Cairo intends "to continue its efforts towards concluding a balanced and just final agreement... which secures the three countries' common interests," the foreign ministry said in Cairo.

Egypt depends on the Nile for 90 percent of its water supply and sees the dam as an existential threat.

Ethiopia, which wants to boost its electricity supplies, insists that Egypt's access to water will not be affected.

After three days of talks in the US capital, the countries' foreign ministers "noted the progress achieved," in a joint statement released Wednesday.

A draft deal saw Ethiopia commit to fill the 1.8 kilometre dam, under construction since 2011, only during the rainy season.

The compromise sealed Wednesday is a sign of major progress after nearly a decade, said Hany Raslan, an expert on the issue at Cairo's Al Ahram Centre for Political and Strategic Studies.

"This initial agreement is close to what the Egyptian side demanded but there are still many technical details to be ironed out," he added.

The situation today seems a far cry from last year, when the International Crisis Group warned against "violent conflict" over the issue.

Ethiopian Prime Minister and Nobel Peace prize winner Abiy Ahmed said in 2018 that he could mobilise millions of citizens for a war to defend his country's right to build the Grand Ethiopian Renaissance Dam (GERD) if need be.

Devil in the detail

"We have to keep in mind that five million cubic metres of water affects around one million acres of arable land in Egypt - people's livelihoods are at stake," Raslan noted.

The Nile River is the longest in the world, crossing 11 countries, but the dispute centres around Ethiopia and Egypt.

Addis Ababa wants to fill the dam quickly to set in motion the $4.2 billion hydroelectric barrage to double its electricity output, while Cairo wants the reservoir filled over several years.

A final agreement is now expected on January 29, overseen by the US Treasury Department and the World Bank. 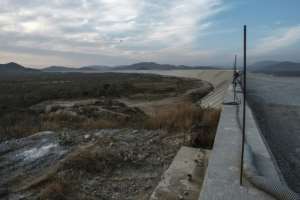 A draft deal with Eygpt and Sudan saw Ethiopia agree to fill the 1.8 kilometre dam, under construction since 2011, only during the rainy season. By EDUARDO SOTERAS (AFP/File)

Addis Ababa will aim for the dam to rapidly reach 595 meters (1,952 feet) above sea level, with later fillings determined according to river conditions.

The dam will be filled "in stages... in an adaptive and cooperative manner that takes into consideration the hydrological conditions of the Blue Nile," said a joint statement released Wednesday by the United States.

"But the devil is in the details really," Raslan said.

Ethiopia says power generation is expected to begin by the end of this year and be fully operational by 2022.