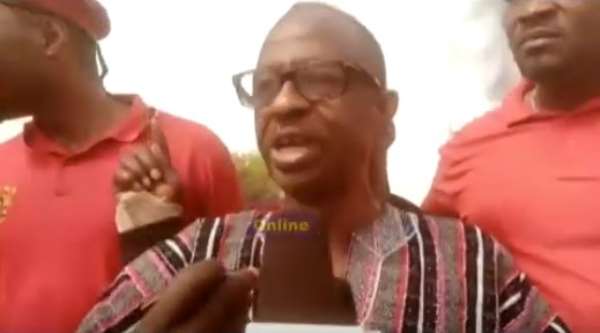 Speaking Saturday on the sidelines of the ‘Tikuyasi’ demonstration which was organised in Tamale, the Northern Region capital, to protest against the EC’s proposal to create a new voters’ register, he said the actions of the EC boss, Jean Mensa, bordered on toying with the country’s democracy, something he says, should not be allowed.

“We cannot struggle to build a democracy for 30 years only to allow one individual to just come and break everything apart. So we are saying that we will never agree for our democracy to be toyed with.”

Asiedu Nketia described the series of protests scheduled to take place in Accra and Kumasi as the dawn of a “long-drawn battle to protect the democracy” of the country.

“We are calling on everybody, it does not have to be the political parties; individuals, pastors, other religious leaders, Imams, must get up because peace is something that you need to struggle for and this is the beginning for the struggle of the peace of this country,” he added.

According to Asiedu Nketia, their protests will end at the doorstep of the Presidency, in an effort to get their concerns heard.

“Whatever it takes to pump a little bit of sense into the head of Jean Mensa and her cabal, we will do it,” he added.

He assured Ghanaians of a peaceful election process at the end of the year and emphasised the need for honesty in the electoral process.

“We can assure you, that 2020 elections will come on undisrupted but it must be free and fair.”