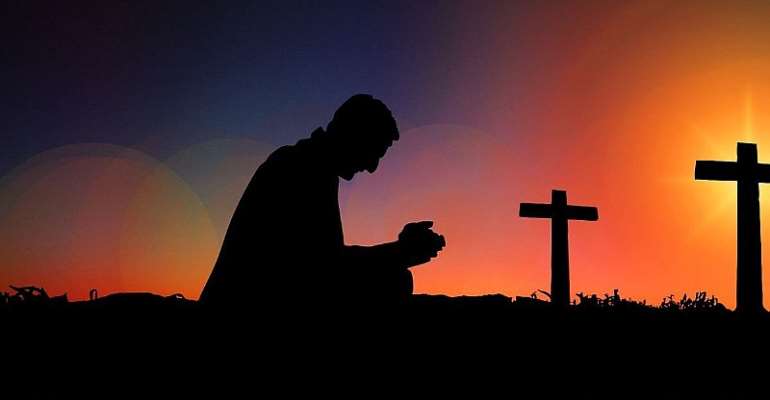 Many evangelical sects are of the believe that a man who has not given his life to Jesus Christ to be regenerated through His substitutionary work on the cross of Calvary which is solely the work of God’s grace, is a sick man. In fact they are of the view that the man is not merely sick but he is mortally ill unto death and needs a rescuing hand mightier than him. But the truth is though such a man is dead according to Paul’s letter in the scriptures, he still has a tiny feeble of moral ability left him to respond to the call of salvation.

The foundation of man's existence is that “ALL HAVE SINNED”. This was the verdict before both the white man and the black man were birth by another sinful parent on any continent on earth. The sinner is said to be gravely ill and at the brink of death or be comatose. At this state of rigor mortis, the sinner who is full of pride and bitten by the bigotry of religion and ignorance must agree he needs a medication that only God can offer and he must be humble enough to either stretch forth his hands or take the medicine or opened his mouth and swallow the pill. This presuppose to me that though God has done the 99% 0f what is necessary, man is still left with 1%, he must open his mouth and take the medicine is likened to opening your mouth and confessing the Lordship of Jesus Christ and believing in the heart.

As a soul winning addict, I will likened a sinner to a drowning man who is unable to swim and bobbling at the surface of the water and yet refusing to acknowledge his inadequacy and insufficiency in himself so as to receive the life of Christ. Yet his only hope is to stretch forth his hand and pick the life jacket thrown at him from God because if he doesn’t grasp that jacket, he will certainly die at the last drown. His only hope is to grasp the life jacket, in this case the jacket is Jesus Christ given to the world by God himself that through this pattern ONLY shall the falling man be saved but man says No, what else shall God do to save man?

Man by nature cannot save himself. However, he is still alive, he can still stretch forth his hands and take hold of the life jacket or opened his mouth wide to be fed by God. His eternal destiny depends on what he does with those fingers on the surface of the sea of sin or what he does with his mouth on the bed of affliction. What is the results? God’s efforts of 99% which involves sending his only begotten son to come and die will prove futile if the 1 % of man is not fully utilized. The reason man may suffer and probably burn in eternal fire is not because God is wicked but it’s traceable to this singular act of not implementing the 1% of man’s effort. The 1% folly of man expressed through his rejection of salvation is cost of man's eternal damnation not the mercilessness of God.

Apostle Peter proposed to us in 2nd Peter 3:9 that “the Lord is not slow in keeping his promise, as some understand slowness. Instead he is patient with you, not wanting anyone to perish, but everyone to come to repentance”. It is God’s desire that men be saved and be safe. The ground debate that stirs the cauldron of controversy centers on the question “ Is Salvation a necessity?”. Well, so far as life on earth continues in eternity; heaven or hell. It is needful that man be saved to avoid the eternal plaque of unquenchable flames and stop seeking analogy that soothes our trouble minds. Jesus Christ is the only conduit to eternity without tears.

Get Jesus, Get SAVED.
PRAYER: Lord Jesus! I permit your Lordship over my life.