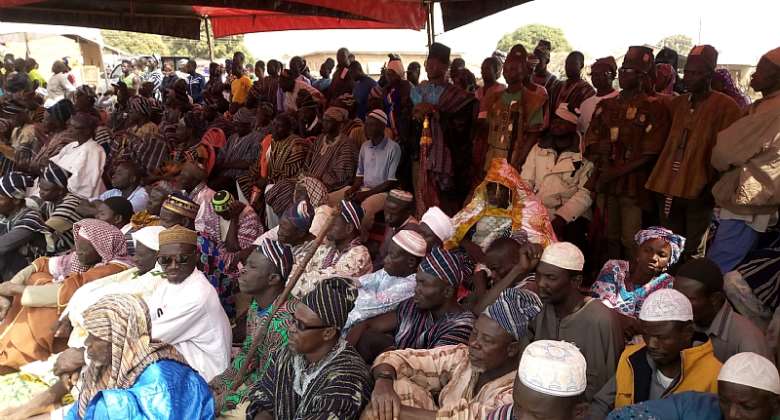 The newly enskinned Paramount Chief of the Busunu Traditional Area of Gonja, Busunuwura Monasa Jonokpowu (II) has assured the people of his Traditional area that the good works started by his predecessor late Busunuwura Nungbanso will be continued.

He bemoaned the high rate of indiscipline among the youth of the area which needs serious attention and therefore promised to promote a Youth association that will help to curb this menace.

Busunuwura Jonokpowu (II) went further to mention poverty, illiteracy, water problem, logging and charcoal burning etc as some of the problems facing his people in the Busunu traditional area.

He therefore urged sons and daughters of the area to collaborate to enhance development.

On the issue of education, Busunuwura appealed for the construction of a Senior High School (SHS) in Busunu since the number of Junior High Schools (JHS's) in the area has enough students to fill any SHS in the area.

He further appealed to the government to fast track the construction of the Busunu- Daboya road to enhance easy travelling on that stretch of road.

He therefore reminded the newly enskinned chief that Busunu got connected to the national electricity grid through John Dramani Mahama when he was President.

The MP said former President made sure schools, roads, markets health centers etc were constructed in the area under his tenure as the President of Ghana.

He said the former President has therefore asked for prayers from the newly enskinned Busunuwura so that in the polls in 2020 when he is declared winner, the Senior High School which he acquired land around Tailorpe will be built and further complete the Busunu-Daboya road that he John Dramani Mahama started.

Ghana's President Nana Akuffo Addo who was the Special Guest of honour for the occasion was also represented by Mr Samuel Abu Jinapor, Deputy Chief of Staff and Parliamentary Candidate of the NPP for the Damongo Constituency.

Mr Samuel Abu Jinapor said apart from what the Central government is doing for the Busunu traditional area, he personally has funded a lot of projects in the Busunu area.

He said candidates writing the Basic Education Certificate Examination (BECE) from the Busunu area are always properly taken off through him.

He said the Busunuwura who was the Chief of Murugu is a living testimony to what he did at Murugu by connecting the Murugu area to the national grid.

Abu Jinapor also assured the people of Busunu that the water situation will be a thing of the past since the government is working around the clock to fix that.

He further mentioned to the people of the Busunu area that he has constructed some schools in the area and employed people to teach the children.

People from all walks of life including Chiefs, politicians, government officials and so on were in Busunu to witness the outdooring ceremony of the new Paramount Chief. Kongwura Seidu Jinkurge representing the King and Overlord of the Gonja Traditional Area, Yagbonwura Tuntumba Boresa (I) and was made the chairman for the ceremony.

He started his working life as a Game warden at the Mole National Park and later a teacher at various schools in the West Gonja District.

He moved on to become a Revenue Collector with the West Gonja District Assembly for many years.