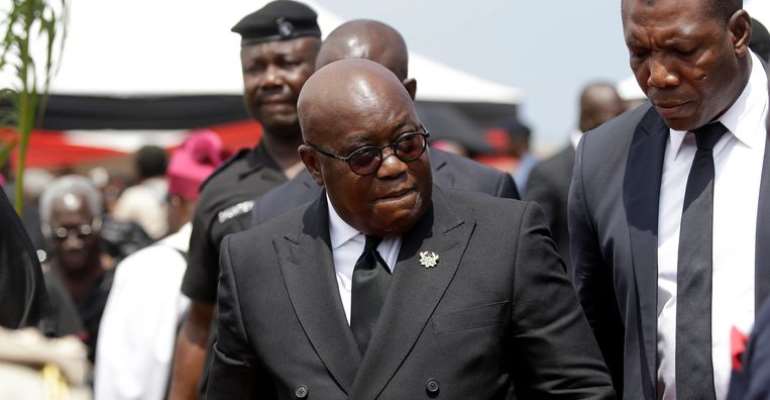 There is nothing wrong if a president promotes government workers, the police or immigration officials but the president must understand that a promotion is not strong enough to limit the drastic effects of nepotism and corruption in a country. As a matter of fact, Ghana is seriously bleeding from corruption and nepotism.

Nana Akufo Addo wants to be loved, admired and acknowledged by Ghanaians as a leader who cares about the people but he has failed to tackle serious problems in the country which could have given him that recognition he is dying for.

Last week, Akufo Addo, gave promotion to 6,000 police officers and has gone further to give another promotion to over 400 junior immigration officers.

Promotion is only the activity that supports or encourages a cause, it neither solves a depreciating economy nor unemployment problems.

Therefore, Akufo Addo, work hard as a competent leader and solve the main problems the common Ghanaians face today in the country and stop seeking a cheap and worthless self-recognition.

It would have been better to be incompetent with 50 Ministers than having over 123, yet don’t know what to do because you have given Ghanaians a false hope with such elephant-sized ministers.

It’s a drain of national resources to have such a large number of ministers in the country, yet nothing significant has been achieved by your corrupt and inefficient ministers.

If productivity comes from learning, which gives birth to efficiency, then as a leader, you need to dig out those secrets to build Ghana.

Let Ghanaians, including the police and immigration officers, admire your government by creating employment and a sustainable economy for the country, not through cheap promotion.

If you are sincere to yourself, you will agree with me that your ego and self-recognition tendencies have done a lot of damage to Ghana, more than the progress Ghana needs.

Your ministers are those who have caused your downfall because they fear to speak against your incompetence, nepotism, and corruption to keep their posts.

Creating a learning society should, therefore, be one of your main objectives of economic policy, which results in a more productive economy and a better standard of living.

The government must insist a lot on the decisive role in proposing and implementing decisions that give the correct direction to the enhancement of learning in the economy as in the whole of society.

Governments play a central role in education, health, infrastructure, and technology policies, for each of these areas certainly contributes to shaping the economy. This is not the first time such an article has been published, yet there is never progress in Ghana.

Structural adjustment policies can end up stifling the growth of countries, especially those with an emerging economy.

Therefore, you mustn’t think those promotions can bring any change, improve the economy or creating employment, it only helps those you have promoted.

As a leader who wants to be acknowledged as efficient, concentrate on the improvement of the life of every Ghanaian, not only the police and the immigration because the votes of the majority that counts.