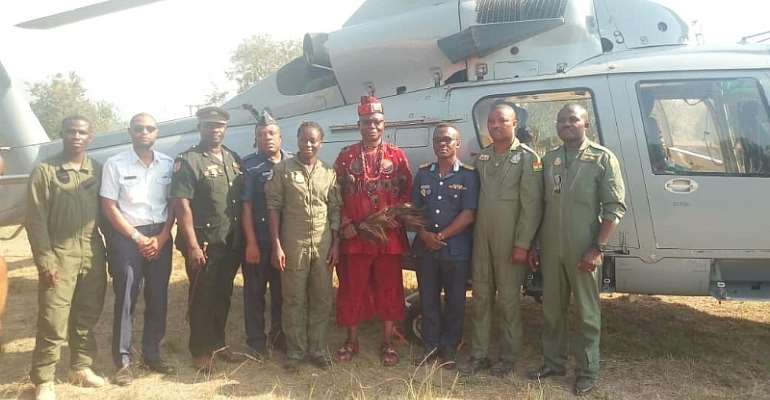 A cadre of officers from the Ghana Air Force High Command at the Burma Camp in Accra has, around the hour of 11:00 GMT on Tuesday 31st December 2019, made a historic landing in Fodome Helu to pay homage to Togbega Gbedegbleme Akpatsa ll.

Scores of people rushed out to catch a glimpse at the remarkable spectacle as the helicopter, GAF630, belonging to the Force made a surprise landing on the Roman Catholic Junior High School football pitch.

The crew - numbering eight and led by two Group Captains: Mills and Gbesorgbor - came on a delegated mission to visit their comrade, Togbega Gbedegbleme Akpatsa ll, and extol him on his elevation as the new paramount chief of Fodome Traditional Area.

At present, he works in Mali as the Chief Aviation technical compliance Officer at the United Nation’s Air Force Base; contributing his quota to the intergovernmental organization’s global peacekeeping efforts.

On the part of the delegation, Group Captain Mills who conveyed the goodwill messages from the Chief of Air Staff: Air Vice Marshall, Frank Hanson and all Base Commanders of the Force in Tamale, Takoradi and Accra, has told the chiefs and people of Fodome about how the Headquarters of the Ghana Air Force was informed about the installation of their former Comrade, for that reason, they considered it fitting to pay him a visit. He, therefore, thanked them for considering their ‘brother' worthy for the good course as an overload.

Togbega Gbedegbleme Akpatsa II who welcomed the delegation lauded the Force for the recognition they accorded him. Addressing a gathering in his Toti Palace in Helu (capital of the paramountcy), the new Gbedegbleme of Fodome said he was very grateful to the Chief of Air Staff: Air Vice Marshall, Frank Hanson, the Base Commanders, and the entire staff at the Air Force Headquarters for the delegation's call on him. He encouraged them to keep the brotherly rapport they have extended to him.

Togbega also motivated the crew not to be complacent in the place of duty but to remain firm and disciplined. More so, he was particularly pleased to meet the female pilot who flew the team to Fodome. He seized the occasion to advise the youth especially the girls in Fodome to take formal education seriously.

Togbega again mentioned that his doors are always opened to the Ghana Air Force at any time for consultation purposes. Through the delegation, he appealed to the Chief of Air Staff to consider some of his youths who are qualified and are interested in joining the Air Force during future enlistments.

Before flying back to Accra, the officers, on behalf of the Force, presented to Togbega some cartons of assorted drinks together with undisclosed cash as gift.