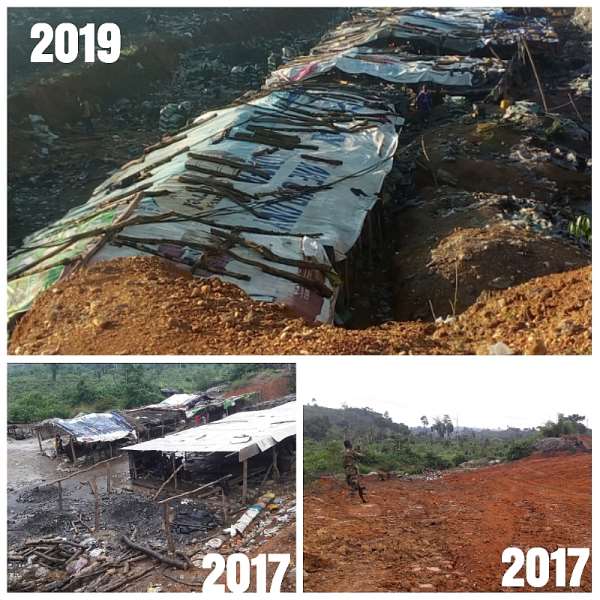 The sad atmosphere, which welcomed the day at the once vibrant galamsey site at Mbease Nsuta in the Prestea Huni – Valley Municipality of the Western Region, lingers on the minds of those whose relatives were buried beneath the pit.

Although the Ghana National Fire Service (GNFS), the Ghana Police and galamseyers themselves who formed the rescue team worked tirelessly to retrieve the lifeless bodies, they could not push for more after one was retrieved; that was because their lives were also at risk.

After three days of being hopeful, that those trapped were going to be rescued, rescuers hopes dashed out, after the voices of some trapped miners they were hearing in the pit, ceased.

Despite the fact that there was a fetish priestess on the site to perform some rituals, suggesting that, the collapsed pit was caused by immoral acts being perpetrated by some miners at the site and that until she cleared the way no one could get in there and get them out, one Ibrahim Musah, who escaped by the skin of his teeth said, the collapse happened after they used dynamite for blasting in the pit.

The galamsey operations were ongoing at the time the government of Ghana had declared Ban on Galamsey and had deployed Operation Vanguard to various sites to arrest recalcitrant ones.

The Prestea Magistrate Court Judge His Lordship Frank Ashitey Addo, declared the 21 remaining in the belly of the earth, dead in absentia on Thursday 6th July, 2017.

The number was arrived at, after a roll call was done on those who were on site the day the incident happened.

On the same day, a short burial service was held at the Mbease Nsuta galamsey site for the 22 illegal miners who died in the collapsed pit.

Present at the service were the Prestea Magistrate Court Judge, Pastors, Imams, Police, families of the deceased, galamseyers, officials from the Prestea Huni – Valley Municipal Assembly, Chief of Mbease Nsuta Nana Adu Panyin and one of the Deputy Ministers for Lands and Natural Resources Benito Owusu – Bio, who was at the scene throughout the days the rescue team was trying to save lives.

A day after the 21 remaining in the pit were declared dead, the government of Ghana ordered for the pits at the galamsey site to be destroyed and land reclaimed to prevent galamsey activities there again.

With a heavy security present on Friday 7th July 2017, hats, camps, ghettos, food joints and other resting places at the site were leveled.

Mr. Omari Frimpong, who supervised the reclamation of the land, clearly stated that, 50 active pits together with other 25 none active ones were sealed and destroyed.

The activity on that day was clearly to declare the site a no go area, grave yard and unsafe for illegal mining operations because safety was ignored in their activities.

In the night on same day, Hon. Benito Owusu – Bio told Araba Koomson on Joy News Prime that, there was no way illegal miners were going to operate in the area again since every available thing that they held on to, which encouraged them to work in the area was destroyed.

Few days after the place had been cleared, the Member of Parliament for Prestea Huni – Valley Constituency who doubled as a Deputy Minister for Lands and Natural Resources, Lawyer Barbara Oteng-Gyasi, visited elders in the community, commiserated with them and promised government’s alternative livelihoods for those who were into the galamsey activities.

She asked them to constantly advise the youth in the area to be rest assured that, the government was rather poised to sanitize the activities and not to collapse their source of livelihood.

The death of the 22 caused excruciating pain to relatives, the Mbease Nsuta community and Ghana as a whole, which many thought the area would not be used for such activities anymore.

Two years down the line, pits have been created, galamsey activities are ongoing, despite collapsed pits killed 22 illegal miners there.

The 350/30 metre square area which was destroyed and covered is witnessing brisk galamsey operations.

Though many had left for the Christmas holidays at this reporter’s last visit to the area on December 23, 2019, others remaining were seen with their workwear and torchlight.

Either going “down” or had just come out and relaxing under the shed close to the entrance, just before the shed where the committee members who are more like supervisors were sitting.

Investigations revealed that, the resurgence of galamsey at the deadly Mbease- Nsuta site started a year ago.

Currently, approximately 21 pits have been created and being mined for gold.

One miner told this reporter, “there is money on the land so the galamsey will go on”.

He further said, “about 40 more pits will be created next year to have more people come here to work so if you want to work just come”.

He even advised that, if this reporter is financially sound, he should come and sponsor though currently there is only one sponsor for the 21 pits. He believes if he does that, he will just be home getting richer as the “boys” work for him.

Early 2018, the community wrote a letter to the Prestea Huni - Valley Municipal Assembly, asking permission for the bodies to be exhumed and given befitting burial, since their ghosts seemed restless and were hunting the residents or the area.

The Municipal Assembly later referred the matter to the Environmental Protection Agency (EPA) for advice. However, my source at EPA tells me, such letter has not reached them.

Speaking to the Secretary for the Small Scale Miners Association in the Prestea Huni – Valley Municipality, Mustapha Muhammed, he said the association is not aware the area is being used for galamsey activities again.

He said he is however aware that the government is allocating areas for community mining through the Municipal Assembly and that he doesn’t know whether the place has been earmarked for that project or not.

Contrary, the information gathered says, the community mining projects will rather be at Aboso Wassa Nkran, Aboso Fante Mines and Aboso Brigade, all the Prestea Huni –Valley Municipality.