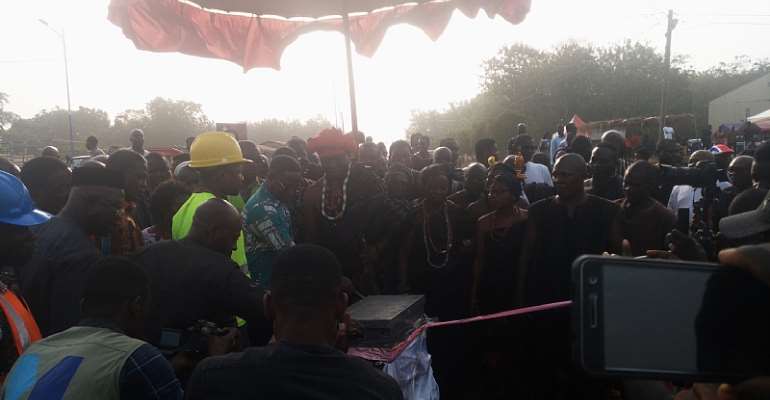 In a short ceremony held on 28th December, 2019, at Fodome Helu, the Minister of Energy, Hon. John Peter Amewu, on behalf of the President of the Republic of Ghana, His Excellency Nana Akufo-Addo, has commissioned the first phase of the street lighting project which is expected to cover selected communities in the Hohoe Municipal area.

This gesture was in fulfilment of government’s programme to provide communities in selected regions with new energy efficient street lights across the country, including the Volta region.

Fortunately, the Fodome communities that benefited from this magnificent project include: Helu, Agbesia, Tormegbe, Agbetsido, Woe, Hloma, Amele and Axor.

In a gathering comprising government functionaries, chiefs, queenmothers and citizens of the area, Torgbega Gbedegbleme Akpatsa II who also doubled as the chairman of the occasion was highly delighted by the gesture. He described the project as a remarkable one because, according to him, there are still certain principal streets in Accra, the capital city of the country, as well as in Tema, the harbour city, which are yet to be beautified with modern street lights. By so doing, he rated Fodome as now a small European city by the way the communities have become transformed with street lights, especially when one walks through its main streets during evenings.

In a Welcome Address read on his behalf, Torgbe Kottoh, the Amankrado of Fodome Woe, also applauded the government on it’s revolve to provide Fodome community with new street lights. However, he highlighted other challenges facing the people of Fodome.

Among other things, he mentioned the absence of Senior High School and lack of clean portable water. He stated that, at present, Fodome community heavily depends on river Nubui which is an extension of the Wli Waterfall. But tourism activities with the waterfall always pollute it making its continuous downstream use by the people unsafe.

Moreover, he emphasized the community’s donation of over 900 acre land for the establishment of the second campus of the University of Health and Allied Sciences (UHAS), and further appealed to the government through the Energy Minister to make use of the abundance human resources of the area immediately schooling activities begin on the campus.

For his part, the Minister of Energy, Hon. John Peter Amewu, on behalf of government, thanked the paramount chief and his people for the warm reception accorded them. And since the occasion coincided with the enstoolment activities of the chairman of the event as the paramount chief, he seized the moment to congratulate him on his first official role of facilitating the commissioning of a lighting project in his area.

Further, he also congratulated the kingmakers for choosing from among the higher echelon: an accomplished and a well-exposed ruler to lead them, and appealed to them to support him.

Subsequently, Hon. John Peter Amewu disclosed to the gathering that his ministry’s commitment to supply energy in Ghana is in line with the Millennium Development Agenda. And in the coming days, similar projects shall cover specific areas in selected regions in the country such as the Volta, Oti, Ashanti, Ahafo, and the Bono East, among others.

He also indicated that, so far 20 million Ghana cedis is earmarked to supply street lights with underground cables within selected communities in the Hohoe Municipal area, and that the fair share of the ongoing project was what they were about to commission in Fodome.

In addition to the above, Hon. John Peter Amewu assured the gathering of government's preparedness to tackle other challenges in the area so long as his government retains power in 2020.

In his closing remark, the chairman of the event, Torgbega Gbedegbleme Akpatsa II, thanked the Minister of Energy, Hon. John Peter Amewu for his special affection for the people of Fodome: first, by donating to the paramountcy modern canopies and chairs in recent past, and second by surprising them again with street lights.

Moving away from that, he retriated that much as he would appreciate government’s efforts, particularly, in bringing the contractor on the UHAS project in Fodome back to site, construction work on the campus has been very slow compare to the level of progress the University at Somanya is enjoying even though the one in Fodome began long time ago.

He therefore appealed to government to allocate a special fund for the development of the UHAS, and called on the Hon. John Peter Amewu to use his good office to influence decisions for rapid work to commence on the site.

Again, he equally used the occasion to express his displeasure about how, on the 22nd December 2019, a group of arm men raided his community and arrested as many as fifteen innocent citizens without their consent; surprisingly so without the knowledge of the Municipal Commander of Police. As such, he stressed that should there be any similar exercise in the future, the chiefs of the area ought to be duly notified.

Torgbega Gbedegbleme Akpatsa II assured government of not going to shield any citizen found entertaining secessionists’ ideas by saying that: “my administration would not countenance any such activity. And we will cooperate with government in the effort to get anyone they suspect to be participating in any such activity.”

Obviously, the event afforded the New Patriotic Party the opportunity to introduce the Energy Minister, Hon. John Peter Amewu, to the chiefs and elders of Fodome as the party’s parliamentary candidate for the Hohoe North Constituency in the December 7, 2020 Parliamentary election.

Other dignitaries present at the event were: the Hohoe Municipal Chief Executive, Hon. Teddy Ofori; the Volta Regional Coordinator of FSHS, Mrs Fidelia Dorleku; some NPP party executives; a number of regional and district power distribution officers; and a team from the Ghana Electricity Company.