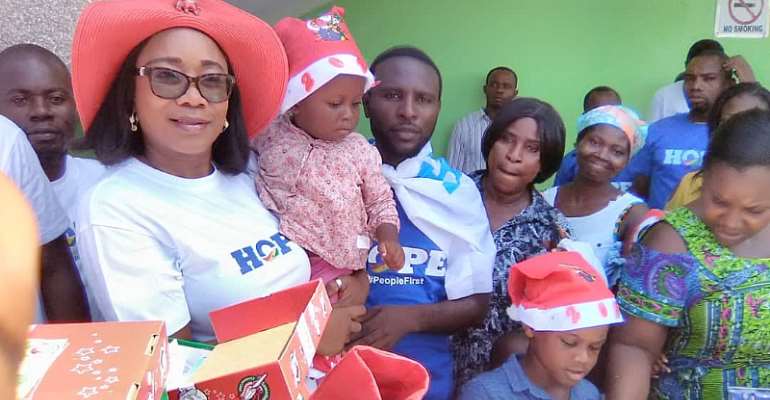 On December 24, 2019, Agona Swedru witnessed a clean-up exercise by the Swedru Chapter of the HOPE Campaign in and around the premises of the children ward of the Swedru Government Hospital.

The Clean-up exercise which was organized in conjunction with the MP for the area and Minister for Gender, Children and Social Protection, Hon. Cynthia Morrison was organized under the theme; "Using sanitation and best environmental practices as a key tool for Ghana Beyond Aid'.

The HOPE team comprised of over 200 able-bodied men and women and it was truly a sight to behold as they undertook their allotted duties under the able leadership of the chapter lieutenant, madam Florence Nightingale Setrana.

The delight of the children and all who witnessed this exercise was however not to end there as the Chapter had other things in stock for them.

Immediately after the clean-up, Florence and her team began the next phase of the program which was the donation of items such as Christmas hats, Teddy Bears, Bibles, toffees, dresses and drinks to the children who were on admission at the hospital.

The presentation of these items and other hospital items was done by the Honourable MP and Minister of state, Cynthia Morrison.

The HOPE team then climaxed the day with an end of year party which was hosted in their honor by the MP.

In her address to the members of the chapter, Hon. Cynthia Morrison expressed her delight at seeing young people lend their energies towards community-building activities and expressed her willingness to do all she could to keep the flame of patriotism burning in the youth.

Lt. Florence Setrana also commended the membership of the chapter for keeping faith with leadership and promised to do more to deliver on her mandate as the leader of the chapter.

She also encouraged them to ready themselves as the chapter and HOPE Campaign in general kicks off their 2020 activities which have been dubbed “#Ready4More”.

A number of HOPE champs and dignitaries were present for this event and these included Champ Stephen Debrah and several other lieutenants from neighbouring chapters in the Central Region.

It’s beyond debate; Akufo-Addo has completely mismanaged Gha...
14 minutes ago

My morale is down – Angry Inspector reacts to mass promotion...
18 minutes ago