The Monster At Bimbagu Bridge: Many Killed In Car Crash 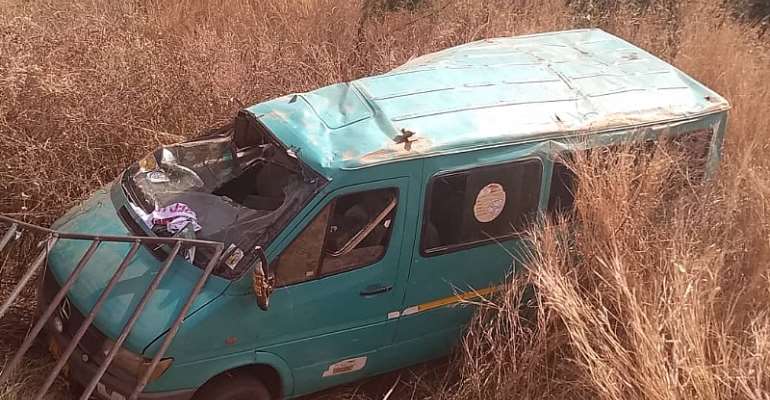 Accidents on the Binbagu bridge in the North East Region has claimed a lot of lives and destroyed properties beyond estimation since the inception of the road during J.J Rawlings regime to date. The cause of most of the accident cases have been attributed to the sharp nature of the curve right on the bridge.

What ought to have been done immediately after the construction was to foresee the likely eventualities that would be associated to it and put up appropriate measures to help prevent avoidable accidents and its related deaths. Ever since this oversight was made, there has been series of accidents occurring on this bridge, and anytime accidents occur, at least one or more deaths are recorded.

I wish to state that we are all at risk as far as the sharp-curve is concerned. It could be you, it could be me in the near future. What should be done to reduce the accidents on this stretch of the road in my candid observation is to put up permanent speed rumps before the bridge where the curve is. Again, the nature of the bridge can be enlarged or expanded enough.

The question that would be raised at this juncture is who funds the project? When any of us happen to get involved in an accident there, who would pay for the cost? Is it not our family members, during which time the politicians come in to do funeral greetings and we feel happy they come. But we often forget that they could have repaired the road for us to prevent the needless lost of lives.

First of all, the onus lies on our leaders, from our trade leaders( chiefs) to political leaders. Leaders are supposed to take action to address public problems, not remain in their comfort zones. And we are supposed to hold them accountable to our problems. Leadership is not a comfortable word. It is often said, uneasy lies the head that wears the crown.

HOW TO FUND THE SPEED RUMPS PROJECT
We are endowed with economic ventures such as markets. These could be a source of revenue for us to undertake this kind of project. We have principal markets in the Bimoba Land which include Nakpanduri, Najiong, Jimbali and Bunkpurugu markets. We can raise funds from these markets and solicit supports from the district Assembly and regional coordinating council to help fund the project. Other option is that the District Assembly and the Member of Parliament can decide to take a percentage of it's priority project funds to get the speed rumps done for us. Again, the District Assembly Common Fund is also there. The money belong to us…! And the issue of the BINBAGU BRIDGE has become a deathtrap to every person who travels on the road from Bunkpurugu to Nakpanduri.

I wish to humble end this article by calling on the Hon Regional Minister, the District Chief Executive, the Chiefs and Civil Society Organizations in the North East Region to intervene to help prevent any avoidable accidents on the said bridge, if not across the length and bread of the entire land.