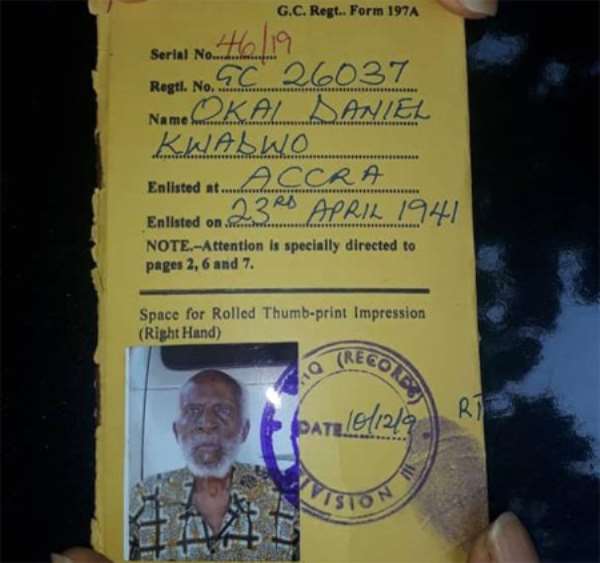 A Second World War veteran, Daniel Okai, aged 105 is crying for his benefits 70years after the war ended.

He survived the ordeals of the Burmese jungle but he is still suffering the bureaucracy associated with collecting his benefits.

The centenarian continues to ask his daughter Madam Emelia Diana Okai “when are they going to pay me?” And her incessant answer – “I don't know” – should not be pleasing to the ears of the old man.

“Upon hearing about the entitlements due my father, I went to the Veterans Association Ghana (VAG) to meet a certain WO Segbefia, who directed us to the Forces Record Office, Burma Camp, where the old man was interviewed to ascertain his claim” she said.

They have made two visits already to the place and the code is still not ready and without it, his entitlements cannot be worked out.

Emelia a retired civil servant said when she asked an official of the Accountant General's Department, he said he did not know.

She suspects that the records office is yet to send details of the centenarian to the Accountant General's Department for the code to be generated.

Emelia and her other sibling, both on retirement had expected that the old man's entitlement would have been ready by now so they could arrange for a nurse to take care of him at home.

At Burma Camp, soldiers who heard about him came out to see in the car. Now visually impaired, the retired private, most of his mates from the military having died, must certainly be getting disappointed that after the torments of war in Burma Camp, he would continue to be in suspense not knowing when his due would reach him.

At one point he told his daughter that he won't go any longer to Accra for the processes, fatigue having set in.

'We did not expect the process to take this long' a distraught Emelia told DAILY GUIDE.

His story is shared by many veterans according to WO Segbefia, a retired soldier himself and works with VAG. “There are more veterans ahead of him in the pension queue but are yet to be invited for the biometric registration. We have identified some poor war veterans far away from Accra but looking at the distance and knotty bureaucracy involved in the process, is it worth worrying them by putting them in a car and conveying them to Accra for a pension that they may not live to touch before passing away?”

Pension House at Burma Camp was constructed by the then Chief of the Defence Staff, Lt Gen Peter Blay, to facilitate pensions of veterans.

The bottlenecks involved in the processes have compelled many to ask whether it is serving its purpose.

Some of the veterans who number less than 200 today pass away before having their entitlements delivered to them.

A visually impaired 103-year-old war veteran, ex Pte Thomas Osei Lar of Annum in the Eastern Region, passed away a few weeks ago without enjoying his pension.