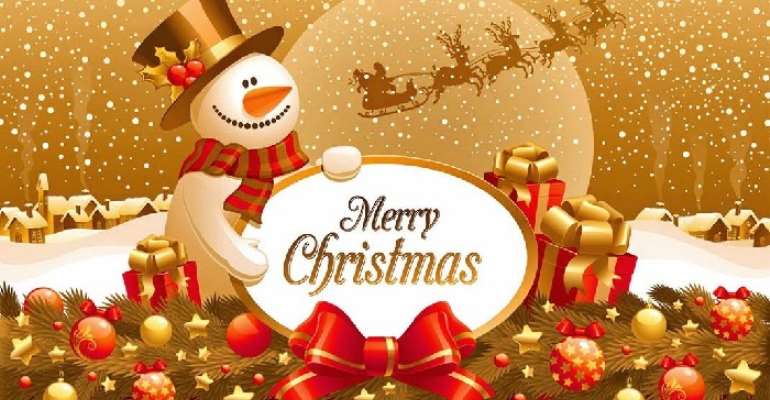 And all at once the dream's begun

And as we mark the old year's passing

Strangers greet on every street

There's Christmas in the air

– Christmas In The Air (Carole King)

The carols will be sung: O little town of Bethlehem, Joy to the World, On the First day of Christmas… up to the Twelfth day. Fouls will suffer – now chicken is so abundant, one does not need to be an adept at killing a live fowl before the leg is thrown to him.

The masses in all the churches will be very vibrant and electrified: worshippers will be shouting for their Lord, Jesus. The words at the (local / English) masses at the Catholic churches will be spiced by Latin: “Dominus Vobiscum” (the Lord be with you); Response: “Et cum spiritu tuo” (And with your spirit). The Anglican Church members might have been saying the same thing, but for the break of Henry VII from papal authority (Rome). Was it a 'friendly fight'? Did it emphasise the phrase: “it takes two to tango”? In 1521, Henry VIII had written a book “Assertio Septem Sacramentorum” in defence of the Catholic religion in challenge to Martin Luther's 95 Theses attacking indulgences. On presenting the book to the Pope, the Pope gave Henry the title 'Fidei Defensor' (Defender of the Faith). Then Henry sought a divorce with his wife, Catherine of Aragon, (his dead brother's wife) who could not bear him a son, an heir to the throne. (Mary, his daughter was not Henry's choice). Henry got infatuated with Anne Boleyn. At 19, Anne Boleyn would not want 35-year old Henry to break her virginity and leave her stranded – till he divorced his wife. Thomas Wolsey wrote a letter to the Pope (Clement) through Lorenzo Campeggi. When the Pope refused to grant Henry VIII the needed dispensation, Henry VIII broke from Rome. King Henry became the Supreme Head of the Church of England. Henry VIII married Anne Boleyn in a small church in 1533. So, the Anglican Church came into being – all done legally by Acts of Parliament. And the whites imported all these religious sects into Ghana, then Gold Coast, because we were their subjects.

At Christmas time, the Pentecostals and Charismatic would be doing their own thing. The 'one-man' churches will use the occasion to demonstrate their Christ-like attributes. Their die-hard congregants will not be interested in Christ's story, but will rather supinely like to be told of the abundant grace delivered by the pastors. Do not be surprised to find some pastors advising their patrons to drink water they have washed themselves with (in a barrel). And the Church elder (Asorepanin) will be the first to drink of this “holy” water! Some will be ready to eat the pastors' ordure (excrement, faeces). “Oh, foolish Galatians” and they will tell you, it is a matter of faith, that is, if you are lucky to escape the charge of being an “anti-Christ”.

Don't exchange words with those who have been bewitched by these modern-day “one-man” church pastors: the pastors can insult you, curse you, or even do something more sinister. All because, it is the Holy Spirit that has revealed it to them. Some will tell you not to wear sandals in church because that is 'holy ground'. Some will tell you not to eat particular food on particular days… if you are a trader, some will tell you not to travel to certain places at certain times because they can foresee some danger ahead – meanwhile they themselves may not know the geography or have the slightest idea about the country you are visiting. (In South Africa, a pastor made his congregants eat the grass of a football field – like sheep or goats!). No Papal Bull (the leaden seal), no orders, no dispensations, no ex-communications, no encyclicals…

Taking the reader too deep into the Church history? Very interesting: we have a stake in Anglicanism because we attended Anglican School at our mother's holy village, Fumesua. Yes, we remember: at Christmas time, one Mr. Arhin would mount a lantern on top of a long bamboo. Everybody living anywhere in the village could see the lighted lantern. Meanwhile, at Kokobra, our father's sacred village, the elders would make a bonfire and almost all the townsfolk would sit by the fireside: some people would tell stories; some would toast plantain and cocoyam. There would definitely be a ram and some “akpet”. There was one occasion when after cooking a whole big sheep, they decided to spice it and get a better taste by adding a little bile to the soup. One would taste it and comment: “atere mu”; another would retort: “ennya nteree mu”, till the whole soup got too bitter to taste because of the bile, and they threw the whole soup and meat away.

In those days, children would gather themselves and move from house to house soliciting biscuits. They would be clad in their mothers' “piece cloths”. They would sing: “Maame, yaba wo fie, ma yen biribi kakra ma yenko…” It was no shame to request food from another woman's kitchen. Small, round biscuits (gem biscuits) would be doled out to the children, and some would string these and make garlands of them, placed on their necks. The “fancy-dress” groups would display their masquerades hiding their true identity, and some would be on stilts (long bamboo), followed by a “brass band”. So much for the ancients.