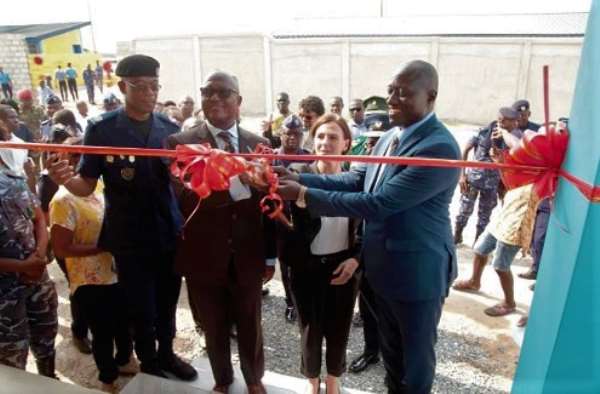 The Danish government has handed over a GH¢2-million dog training school complex to the Ghana Revenue Authority (GRA) to assist with customs preventive operations.

The Danish International Development Agency (DANIDA) constructed the facility as part of its Redesigned Tax and Development Programme.

The complex, located at Dawhenya near Tema in the Greater Accra Region, has classrooms for training dog handlers, a dog clinic, kennels, breeding areas, a search wall, a kitchen and pantry, duty posts and changing rooms.

It will be used by the Canine (K9) Unit of the Customs Division of the GRA.

Benefits
Speaking at the handover ceremony, the Commissioner of the Customs Division of the GRA, Colonel Kwadwo Damoah ( retd), said “with this facility, Customs will benefit from the modern technology of using sniffer dogs in detecting and apprehending smugglers of drugs, explosives, currency, small arms and other illicit substances at our entry and exit points".

He said the complex had facilities that would enable dogs to be trained to detect narcotics, currency and explosives, as well as track wanted criminals.

He said the use of the dogs would reduce significantly the intrusive physical body searches and also reduce delays resulting from that practice.

He said the school would enhance the capabilities of the Customs Division in keeping control at the country’s exit and entry points, especially at the seaports and airports.

Apart from funding the construction of the dog training complex, Colonel Damoah said, DANIDA had also provided 21 vehicles, office furniture and equipment, including laptops, voice recorders, cameras and printers, to the Customs Division to improve its operations.

Danish support
In a speech read on his behalf, the Deputy Minister of Finance, Mr Kwaku Kwarteng, said the dog training facility would complement the government’s efforts at reducing smuggling activities in the country.

He said Denmark’s support in improving revenue collection was an indication that cooperation between the two countries was moving from aid to trade.

She said the government’s plan to build a Ghana that relied on its own resources was a laudable initiative, adding that Denmark would continue to intensify its relations with Ghana to spur it on and for the initiative to be realised.