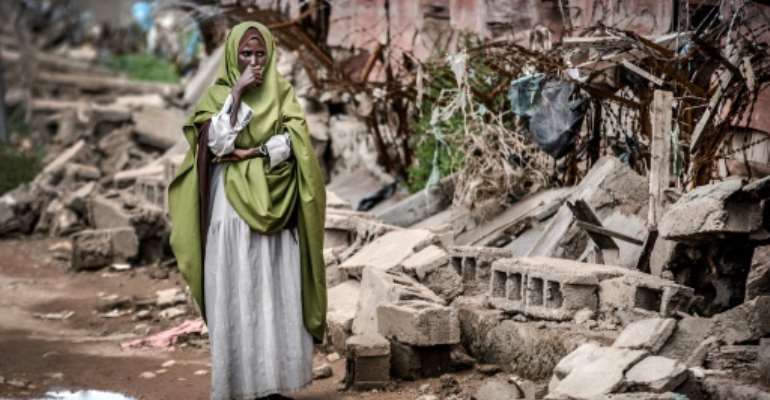 Devastation: A woman looks at the remains of the school in flood-hit Beledweyne. By LUIS TATO (AFP)

As Somalia withered from drought early this year, and her goats dropped dead from thirst, Maka Abdi Ali begged for rain.

When the skies finally opened, nature was unmerciful.

Unrelenting downpours in October turned to flash floods, destroying her meagre home and few remaining possessions, and washing away whatever harvest and bony animals farmers managed to save during the months without rain.

"I have nothing now," 67-year-old Ali told AFP in a squalid camp on the outskirts of Beledweyne in central Somalia.

Here, 180,000 people fled the fast-rising waters in the country's worst floods in memory.

The arid Horn of Africa country has always been hostage to climate extremes. Rain is erratic, and drought a feature of life.

But catastrophic weather events are occurring in Somalia with ever-greater fury and frequency, trapping millions in a near-constant cycle of crisis.

The town of Beledweyne was inundated in the flood -- the waters are now slowly receding. By LUIS TATO (AFP)

Little by little, the ability to recover is ground down, say experts.

There is no time to rebuild homes and replenish food stocks before another disaster strikes.

Impoverished and weakened by decades of war, battling an armed insurgency, Somalia is ill-equipped to cope with the destabilising impact of double-tap environmental crises.

Aid budgets are stretched trying to respond to back-to-back emergencies.

In May, the United Nations launched a drought appeal, warning of looming starvation as Somalia faced its worst harvest on record.

Six months later, it's again appealing for help -- this time for $72.5 million (65.1 million euros) for half a million victims of flood.

"There hasn't been a day this year where we haven't been talking about either drought or floods," Abigail Hartley, deputy head of office for the UN humanitarian agency OCHA in Somalia, told AFP.

Among those fleeing the inundation in Beledweyne, the epicentre of this disaster, were Somalis already on the run from other climate-stricken parts of the region.

"The drought forced us to flee... now we are displaced by floods," bemoaned Maryama Osman Abdi, who abandoned her bone-dry farmland for a new start in Beledweyne.

Now, her home in ruins, she contemplates her next move.

Many had migrated to the banks of the Shabelle River -- a lifeline which runs through Beledweyne -- seeking water to revive their livestock, and nurture their crops.

But the river burst its banks under the ceaseless barrage of rain.

The mighty flood that followed should in statistical terms occur only once in 50 years, according to the Food and Agriculture Organization (FAO).

Omar Dule, 74, who lost his house in the floods, is among those who have taken shelter at a UN displacement camp in Beledweyne. By LUIS TATO (AFP)

"This was different from the others. I have never seen anything like it," Omar Dule, a 74-year-old who has spent his lifetime in Beledweyne, told AFP.

The FAO, bracing for the next overflow, is repairing embankments along the river long neglected by cash-strapped authorities.

Rainfall extremes in Somalia are forecast to intensify this century, even as the region overall dries considerably, said Linda Ogallo, from the Nairobi-based Intergovernmental Authority on Development Climate Prediction and Applications Centre.

"Droughts and floods are increasing, in frequency and intensity," said Ogallo, a climate scientist who specialises in Somalia's weather patterns.

It is an omen already playing out for Mohamed Osman Hashi, whose watermelon and sesame fields in Beledweyne have been devastated again and again.

"In recent times, it seems to be on repeat, almost every year," he told AFP.

This month, even as water slowly receded in Beledweyne, a tropical cyclone transformed deserts in Somalia's north into seas.

Bosaso, in the semi-autonomous Puntland region, received close to a year's worth of rain in less than two days.

Adding to the suffering, the FAO said Wednesday that the country had been hit by its worst outbreak of desert locusts in 25 years.

The curse -- exacerbated by the exceptional rain -- could spread to Somalia's main crop-growing areas.

The just-concluded UN climate summit in Madrid failed to agree on compensation for poor countries, which have least to blame for causing global warming, for weather-related disasters.

This is grim news for Somalia, which lacks the resources to cope with, or plan for, an ever-more hostile climate.

Each blow sets back the monumental task of rebuilding a country reliant on foreign aid to support some 5.4 million people in desperate need.

"Developed countries are more resilient. Somalia has been in crisis for years," said Chris Print, a hydrologist with the FAO and expert on Somalia's land and rivers.

"Ironically, the poorest countries are the most likely to be impacted by climate crisis."

Repeated disasters are grinding down resilience, say experts. Climate victims have no time to rebuild homes and food stocks before the next extreme weather event strikes -- a challenge worsened by Somalia's conflict. By LUIS TATO (AFP)

Two months after the floods began, about 220,000 people are yet to receive assistance, the UN said.

"If it happens again, you can bet that some people are just going to give up," Print told AFP.

Driven from place to place, pursued by a ferocious climate, some have already reached the end of the road.

"We don't know what else to do," said Abdi, squatting in the dirt, surrounded by nine grandchildren.