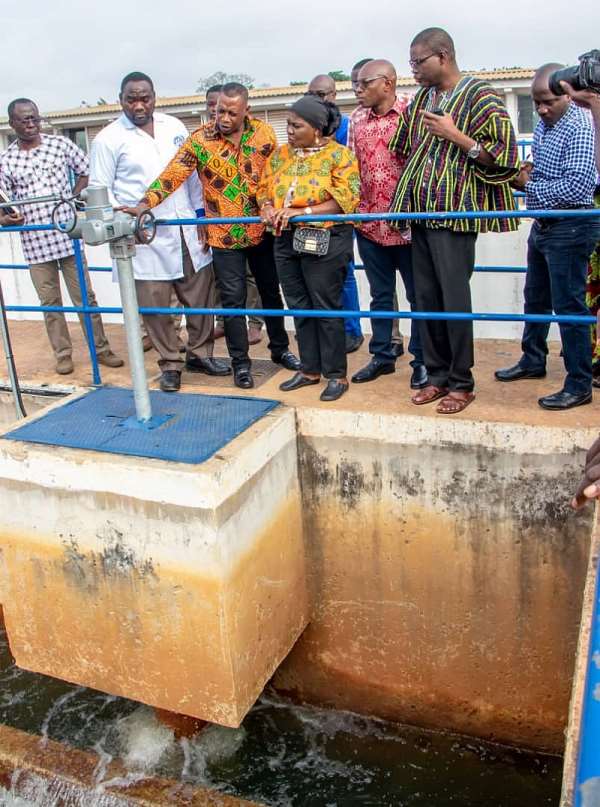 The Managing Director of the Ghana Water Company Ltd. Ing (Dr.) Clifford Briamah has disclosed that the Company through its restructuring and renovation at the Kumasi headworks at Berekese is now able to save one million gallons of water daily.

The one million gallons of water saved is able to provide potable water to 10,000 people extra in the Kumasi Metropolis.

The Managing Director disclosed this when the Minister for Sanitation and Water Resources, Hon. Cecilia Abena Dapaah visited the Berekese Water Works in Kumasi as part of her three-day official tour in Kumasi.

According to the Managing Director, there were continuous losses of water in the past due to the old valves which were more than thirty years old. Following their replacement and the Company’s restructuring, a lot of gains have been made.

The Operations Manager at the station, Mr. Tulasi who conducted the Minister and her entourage around the facility disclosed that currently, the facility treats and supplies 28 million gallons of water daily.

He said, one of the major challenges facing the Company was the encroachment of the Company’s Land (buffer zone).

He noted that though the situation is not very serious as at now, the Company is taking all the necessary steps to avoid any serious challenge that can affect the dam site and the quality of water.

Mr Tulasi appealed to the Security Agencies and the Ministry of Sanitation and Water Resources to support the efforts of the Company to completely arrest the situation.

The Sector Minister, Hon. Cecilia Abena Dapaah commended the Company for its hard work which is turning the fortunes of the Company around.

She said the one million gallons of water saved daily is a major achievement which needed to be commended.

Hon. Cecilia Abena Dapaah noted that there is a need for the construction of a semi-hydro plant to serve as a backup.

The Sector Minister urged the Company to do all it can to replicate the Kumasi example in the other regions as well.

The Minister was accompanied on the tour to the facility by the Deputy Minister, Hon. Michael Gyato (MP), the Chief Director at the Ministry, Mr. Noah Tumfo, the MD of Ghana Water Co. Ltd., Dr. Clifford Briamah, the Chief Executive Officer of Water Resources Commission, Mr. Benjamin Ampomah and other officials from the Ministry.