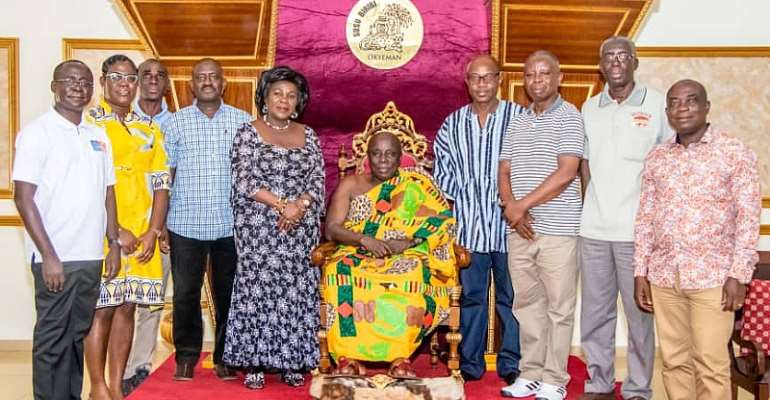 The Okyehene, Osagyefuo Amoatia Ofori Panin has called for strong and punitive sanctions to be meted out to people who litter the streets and throw rubbish about indiscriminately.

He said the nation cannot develop in filth and therefore it was important for the government working through the Ministry of Sanitation and Water Resources and the Assemblies to enforce the bye-laws on Sanitation to promote a clean environment.

The Okyehene, Osagyefuo Amoatia Ofori Panin said this when he received the Minister for Sanitation and Water Resources, Hon. Cecilia Abena Dapaah and her Deputy, Hon. Michael Yao Gyato and other senior officials from the Ministry and its Agencies who paid a courtesy call on him at his place on Sunday, December 8, 2019.

He commended the Sector Minister for her hard work and called on the staff of the Ministry to support her in her campaign. The Okyehene noted that tourism plays a key role in the nation’s development but was quick to add that the Tourism Sector can only thrive in a clean and decent environment, attractive to tourists.

The Okyehene who is celebrating his 20th Anniversary on the stool said for the nation to progress, all Ghanaians must support the vision of the President to make Ghana one of the cleanest countries in Africa. He said, “It is our collective responsibility and action that can make this dream come through”. He called on all Ghanaians to work to consolidate the development agenda of the Country.

He said as part of the celebration of his enstoolment, the Traditional Council has planned to plant 25 million trees in the next five years to promote afforestation and also embark on a project to green the environment. He called on the government to reconsider the establishment of the Sanitation Brigade to enforce the sanitation bye-laws.

Touching on the suspended National Referendum, Osagyefuo Amoatia Ofori Panin said the idea was a very laudable one which would empower grassroots participation at the local level. He called on the government to re-visit the issue to promote effective local governance at the Assembly level.

The Minister for Sanitation and Water Resources, Hon. Cecilia Abena Dapaah expressed her gratitude to the Okyehene for the warm reception accorded her and her team. She commended the Okyehene for his leadership role which has brought a lot of developments to enhance the living standard of his people. Hon. Cecilia Abena Dapaah said plans are far advanced for the Ghana Water Company Ltd. to open an office in the town following a request made by the Okyehene.

She assured the Okyehene that the government’s sanitation program was on course and with the support of all, the vision of the President will be realized.

She said the government in partnership with investors is embarking on the establishment of recycling and waste to energy plants in the country to replace landfill sites in the near future.

The Sector Minister presented 100 boxes of bottled water, products of Ghana Water Company Ltd. And one box of foreign drink to the Okyehene for the celebration of his 20th Anniversary.