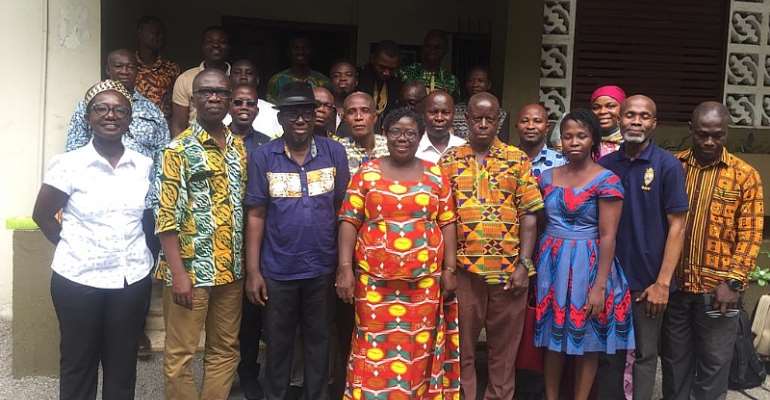 The one-day meeting took the regional leaders through the history of GAW, structure and organisation of GAW, fundraising and Project management. There was also an open forum that gave the various leaders the opportunity to raise issues affecting GAW in their regions for redress.

National President of GAW ; Mr. Francis Gbormittah during his welcome address revealed that this is the first time such a meeting is being held and believed it will strengthen the organisation in the regions and help make the Association more vibrant.

Mr. Edusei Derkyi; a retired banker and a member of GAW who delivered a presentation on the structure and organization of GAW stated that GAW is a powerful tool for change and should be seen as such by members and executives.

He encouraged the regional leaders not to lose sight of the objectives of the Association as they think up programmes and activities for their branches.

Mr. Ebo Assan Donkor; administrator for GAW called for self-sacrifice and patriotism in order to build the association and the nation as a whole.

He recounted the sacrifice of some past and present members of the Association prominent among them being Prof. Atukwei Okine.

He urged the leaders to exhibit the spirit of sacrifice that has sustained the association till now.

Mrs. Sophia Kafui Tey, another resource person from Republic Bank took the regional leaders through a presentation on fundraising and Project management.

She encouraged the leaders to partner relevant organizations and institutions to make impact and strive to remain relevant to their communities. She also called for accountability from the leaders, saying no one will entrust resources to leaders who could not account appropriately for them.

Mr. Francis Gbormittah at the end of the event expressed satisfaction at the conduct of the meeting and said efforts will be put in place to institutionalize it. He prayed that the lessons learnt would be digested and used to the benefit of the Association and also in the personal lives of the participants.

The meeting was crowned with an excursion to the Legon Botanical Gardens where the participants had fun.