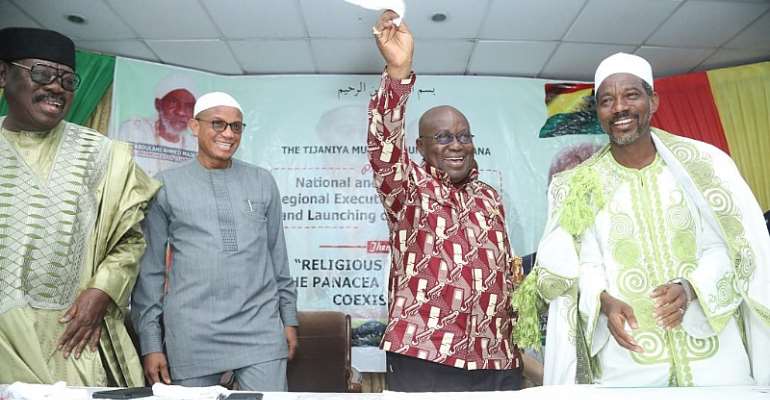 President Akufo-Addo has advised the Muslim youth to help change the narrative of the Zongo community being the den for recruiting violent persons to cause mayhem during elections.

“The Muslim youth cannot continue to be the ones who are used for violent purposes. Do not allow yourselves to be used by irresponsible politicians to engage in acts of destabilization and violence,” he said.

Speaking at the inauguration of the National and Greater Accra Regional Executives of the Tijaniya Muslim Council under the theme: “Religious Tolerance, The Panacea For Peaceful Coexistence” in Accra yesterday, the President said “I advise you to take the guidance of your Sheikhs seriously.”

“I want to make this appeal to you: in 2020, do not allow yourselves to be used by irresponsible politicians to engage in acts of destabilization and violence,” he stressed.

He also urged peace-loving Muslims to speak up against radicalism and all forms of violence that are being negatively perpetuated in the name of religion, saying “it is for you to rescue Islam from the extremists whose activities around the world seem to be defining Islam.”

President Akufo-Addo congratulated the new members of the council and spoke of his unflinching commitment to create a society for all Ghanaians irrespective of religion, ethnicity and gender. “Policies such as the establishment of the free senior high school, establishment of the Zongo Development Fund are meant to achieve this goal,” he added.

The Tijaniya Muslim Council is the representation of the Tijaniya Sufi sect in Ghana.