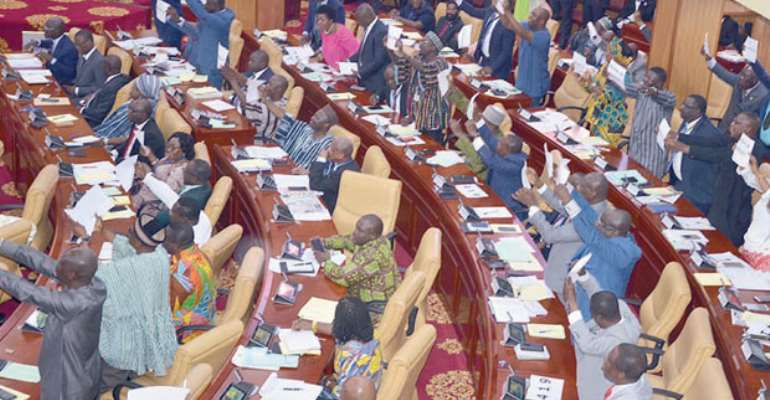 By now, it ought to be clear to Mr. Joseph Osei-’Wusu, the First-Deputy Speaker of Parliament, that the main opposition National Democratic Congress’ Parliamentary Minority cannot be counted upon to healthily and progressively ensure the democratic governance of the country, in the wake of the Haruna Iddrisu Gang’s treacherous eleventh-hour conspiracy to boycott the opportune Constitutional Amendments of Articles 53(3) and 243(1), that would have ensured the direct and partisan election of Metropolitan, Municipal and District Chief Executives (MMDCEs), as well as the partisan election of Unit and Community Leaders and Representatives that had been scheduled for December 17, 2019, but had to be canceled (See “Minority to Boycott Vetting of Chief Justice Nominee” Kasapafmonline.com / Ghanaweb.com 12/15/19).

The National Democratic Congress’ Members of the Parliamentary Appointments Committee, who have issued a consensus-reneging notice to boycott the December 20th vetting of Justice Kwasi Anin-Yeboah, should be promptly ignored, primarily because almost each and every one of this hoodlum pack of corrupt politicians lacks the requisite leadership integrity and moral authority to presume to either certify or impugn the integrity and the professional credentials and credibility of the erudite and distinguished nominee who has already been serving on the highest court of the land for more than a decade now.

What ultimately matters here is that it is the prerogative of the President, generically speaking, that is, to decide who either sits on the highest bench of the land or becomes leader of the members of the highest court of the land. In this instance, that authority and mandate belong to none other than President Addo Dankwa Akufo-Addo, the Commander-in-Chief of the Ghana Armed Forces (GAF) and Chief Public Officer of the august and Sovereign Democratic Republic of Ghana. And, of course, the mandate and privilege of the New Patriotic Party (NPP) Parliamentary Majority is what counts, more than all else, in the legislature’s vetting of the soon-to-be Chief Justice Anin-Yeboah.

Even more significant to emphatically underscore here is the fact that the National Democratic Congress, the direct progeny of the Jerry John Rawlings-led erstwhile junta of the Provisional National Defense Council (PNDC), has no enviable track-record of harboring any remarkable modicum of respect for the image, reputation and integrity of both the institution of the judiciary and, in particular, the image, reputation and integrity of the membership of the Supreme Court of Ghana. And on the latter count, for the instructive information and enlightenment of those among our citizenry who are too young to remember or may not have studied the same in the school and college textbooks, it was the key operatives of the P/NDC, led by Messrs. Rawlings and Kojo Tsikata, both cousins and leaders of the infamous Sogakope Mafia, who unconscionably orchestrated the brutal abduction and savage assassination of the three Akan-descended Accra High Court Judges.

We must also note here that at the time of their barbaric execution, the Supreme Court had been abolished by the Ignatius Kutu Acheampong-led junta of the Supreme Military Council (SMC-I); so, in a real and practical sense, as I have had numerous occasions in the past to meticulously point out, the slain judges, namely, Justices Fred Poku-Sarkodie, Cecilia Koranteng-Addow, and Kwadwo Agyei Agyepong were, indeed, Supreme Court Jurists of first-rate order. The NDC’s Parliamentary Minority’s corrupt and decidedly criminal decision to boycott the December 17 Referendum, ought to have served as enough testimony to the leaders and members of the New Patriotic Party’s Parliamentary Majority that henceforth they are their own best counsel on how to legislatively move the country ahead and along the most progressive and visionary agenda of President Addo Dankwa Akufo-Addo.

You see, we simply just cannot have self-proclaimed pedophiles like Mr. Mohammed Mubarak Muntaka, the NDC’s Member of Parliament for Kumasi-Asawase and the Parliamentary Minority Chief Whip (who would have Parliament lower the marriage for Muslim women, for the most part, for obvious reasons, from 18 to 14 years old) , dictate the terms of who gets named Chief Justice of the Supreme Court, or who gets to sit on the highest bench of the land, and when.