Expectations From The President As He Meets The Press 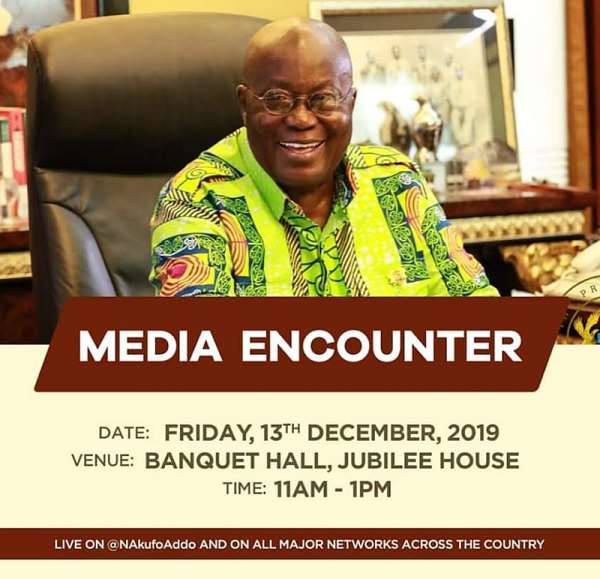 It has become a convention or may I say an annual ritual for Presidents of our country, Ghana, to meet the press to share with Ghanaians any updates, state of affairs and any other pressing issues of governance. Most often, there is always a message of hope and careful scrutiny of events that happen within the year under review. Indisputably, the President's press encounter is a plus for our democracy because it provides yet another platform for transparency, probity, and accountability.

The media who in practice is supposed to represent the voices of the masses/the ordinary citizen have every opportunity to put the President and his government into careful scrutiny. Though in many instances, some of these media men misuse that privilege to put the President to careful scrutiny but rather engage in praise-singing, the program has still not lost its democratic essence.

I wish to encourage members of the inky fraternity to uphold the ethics and principles of developmental journalism and not succumb to any attempt by the government to, one way or the other, push them to do the unthinkable. We have a country to develop collectively after all.

This year's encounter will be the third time the President is engaging in that annual ritual of subjecting himself to media scrutiny. I do remember last year, many of the journalists invited were not given ample time to interrogate the President. Again, there were complainants of lack of fairness in the invitation of the media houses. We were told some media houses were given more than necessary slots while others were denied the opportunity unjustifiably.

I want to believe that my good friend, Hon Kojo Nkrumah, the Minister of Information, might have learned his lessons and may do a better and fair job this time. This is because expectations are soaring too high and the government must polish its shoes again considering the fact that every research results seem to be absolutely unfavorable to the government.

I personally, as an activist and communicator, have followed keenly the activities and actions of government and the reaction of the Ghanaian populace to same. Imaginarily, reading the public perception and the issues that have gained prominence in our political discussions, I expect the following from the president.

1. On the issues of corruption, the president should not clear any appointee again. The president has some unrepentant penchant for clearing his appointees who have been caught in one way or the other in corrupt deals. Indeed, the number of scandals that have been recorded in this administration is frightening. Many can still recall the Ameri notation, the PDS scandal, the National Youth Authority Chop chop, The Maritime Authority scandal, National Lottery Authority, Ghana Export Promotion Center, the most recent report of the Auditor General on the unjustifiable payment of over one million dollars to Kroll Associate for no work done. There are reported cases of massive corruption in the energy sector too. In all of these, the President continues to insist that his government is incorruptible, emboldening his appointees to continue to loot and share.

In the specific case of the PDS, where the government has admitted wrongdoing by some of the players, Ghanaians expected urgent prosecution and no plenty talks. It is my fervent hope that the president will be promising some immediate prosecution to make the establishment of the Special Prosecutor's office relevant. The inactions of the President over the years is the reason why many Ghanaians say that corruption is worse under his regime.

The bloated government has created a complex bureaucratic system, creating a fertile ground for political corruption. The President must renew hopes in the fight against corruption tomorrow. If he fails, then it would be a tacit endorsement or institutionalization of the social canker.

2. On the issue of the referendum, I expect the President to eat a humble pie and not show any sign of vindictiveness. He must admit that the policy of introducing partisanship into our Local Assembly architecture is unpopular and that Ghanaians demonstrated a complete rebellion against it. I don't expect the President to blame the National Democratic Congress. Any attempt of blaming the opposition in that unpopular policy will make the President appear pettier than before.

The President must also explain to us why he withdrew the amendment of article 243(1) which was already in Parliament. The fact that Ghana's rejected article 55(3) does not guarantee the withdrawal of article 243(1) if the government was really committed to allowing citizens to elect their own MMDCES to ensure transparency and accountability.

3. Economy: When it comes to the economy, the NPP government has been depending so much in figures that favour them. The figures, however, does not reflect in the daily lives of the citizenry. Many Ghanaians continue to lament of extreme hardship. Indeed, the basic prices of basic communities have drastically increased. Fuel prices continue to increase, communication service has become very expensive, electricity, cement, and many others have their prices escalated. All these have cumulatively affected the ordinary Ghanaian adversely. I do therefore expect the President to admit and not defend the reality of hardship. The hardship is becoming unbearable. The President must admit the hardship and give us a hint beyond the 2019 budget that was presented to alleviate the suffering of the populace.

Many Ghanaians will not be interested in hearing the inflation rhetoric especially at the time that the depreciation of the Ghanaian currency has affected the business community badly. I am told the cedi now trades with the dollar at about 6.00 per dollar. That is incontestably unprecedented!

Also, the explanation of the Bank of Ghana for printing some higher notes of our currency sounded very unconvincing. It is a golden opportunity to justify why his government thinks that printing of higher notes can deal with our cyclical challenge of depreciation.

4. Security: another issue that has put this government in a serious bad light is the bad security situation we are facing as a country. Many cases of what appears to be contract killings, increasing cases of armed robbery and kidnapping and the incident that took place in the past have left deep scars in the minds of Ghanaians. Some of the media houses may want to know why the President uses a white paper to whitewash the criminals, political goons and state-sponsored militia who showcased their coercive prowess during the Ayawaso West Wuogun bye-election. Going into election year, the precedence left has serious implications in the security of the country. The President should sound reassuring, if not I see the security situation getting worse.

5. Election 2020 and issues: I expect that the President will say something about his commitment to free and fair elections. It is important that he gives that indication. It is important for the international business community especially at the time that many are doubting the credibility of the coming elections in the hands of Jean Mensah. The quest by the NPP and EC to compile a new register after spending much only a few months ago to review it, makes people conclude that the EC is committed to executing one-sided agenda.

One of the Deputy Commissioners is on record to have described the largest opposition party as "a threat to democracy". The same person was seen and heard campaigning in favour of Yes in the recently aborted referendum. In all of these, the government has seen nothing wrong with it, forgetting that such reckless comments from somebody who is supposed to be impartial can throw this country into anarchy.

6. Energy Sector: there are obvious challenges in the energy sector. It is muted that dumsor is likely to intensify going into the festive season because debts owed to sector players. GRiDCo is currently on a sit down strike. The President and his Vice is on record to have argued that our energy challenges were caused by financial challenges and not technical or generational defects. We will expect to hear from the President, the reason for the many current challenges in the energy sector and what the government is doing to resolve it completely.

There are other issues that will come up but as a citizen, the above are of necessity and cannot be relegated in the discussions. I expect the media men to push the President to delve much into the above themes. I am convinced that any meaningful discussion on the above would cover the other peripheral issues in our lives.

Let me use this opportunity to wish the president well in his endeavours and urge all stakeholders of our democracy to commit to improving the standards of our democratic dispensation. No matter the challenges, I believe Ghana is still better than in other countries. It is true that things are fast deteriorating but we all must have a role to play in making the country a better place to live.

May the Almighty God and the gods of our ancestors be upon our motherland. Amen!

#Voice of Conscience#
Denis Andaban
(The Village Boy from DBI)