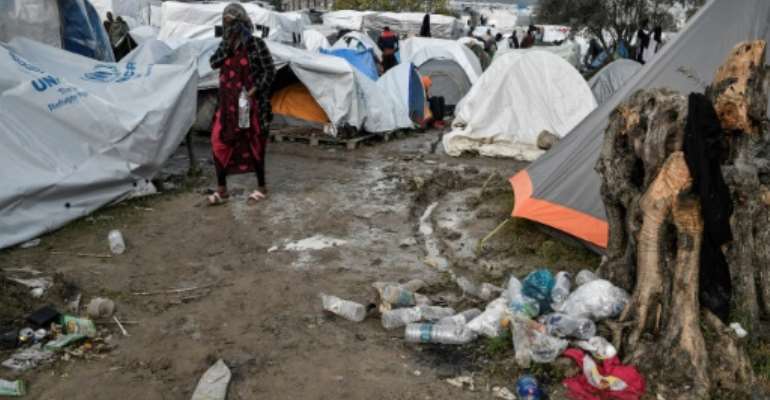 The squalor of the migrant camp on the Greek island of Chios. By LOUISA GOULIAMAKI (AFP)

Mired in the mud, living under a plastic tarpaulin next to overflowing bins, 18-year-old Afghan Merziyeh Eskandari knows she faces another hard day in the migrant camp on the Greek island of Chios.

The daily routine starts with standing in line for stinking toilets, getting two bottles of water and a portion of rice, and later sleeping in the cold without electricity.

The Vial camp on Chios has places for 1,000 people but nearly 5,000 are crammed in. Some of them, like Merziyeh, are camping in a nearby olive grove.

To keep warm or cook food, the migrants cut branches from the olive trees and make a fire in a metal bucket.

The smell of smoke, dirty water and refuse permeates the camp.

A Syrian woman sits in her tent with her children in the Vial refugee camp, on the Greek island of Chios, which is overcrowded with 5,000 people. By LOUISA GOULIAMAKI (AFP)

The UN's refugee agency and NGOs say a lack of hygiene is not the only problem in the camp. It can be a dangerous place -- especially for women.

"Insecurity, especially at night, is often mentioned by the women," UNHCR says.

The makeshift camp is home to men of various nationalities who have migrated alone.

Human Rights Watch recently sounded the alarm, calling on the Greek government to "act immediately to ensure safe and humane conditions for women and girls" in the migrant camps.

The rights group urged the authorities to "identify the vulnerable people, including pregnant women and young mothers, victims of sexual violence and other violent acts", as well as the disabled, and offer them appropriate lodging.

"The simple act of going to the toilets seems too risky for women and girls," says Human Rights Watch's Hillary Margolis in a report on conditions for women in the Moira camp on Lesbos island.

Migrants light a fire in their makeshift camp on Chios island. By LOUISA GOULIAMAKI (AFP)

Zubaida, an Afghan woman living at Moria, told the rights group how she stopped drinking tea at six o'clock each evening so she would not have to go to the toilet during the night. She fears being raped.

Amino Abduhahi Ahmat, a Somali at the Chios camp, told AFP that "at night we have to go to the toilets three or four women together because we're afraid of the drunken men".

Doctors Without Borders (MSF) runs a support programme for migrants who are victims of sexual violence, many of whom are women.

Irini Papanastassiou, a Greek representative for MSF, said some women have been victims of rape but it was not clear when or where the attacks had happened.

Given the overcrowding and dire conditions at the camp, the Greek government has promised to transfer some 20,000 people to the mainland by the end of the year.

But the influx of new arrivals "has been greater than the number transferred, and the conditions in the camp remain extremely difficult", Lida Lakka with UNHCR at Chios told AFP.

Still, Merziyeh says, despite the hardship in the camp, "of course it's better here than in Afghanistan".

At night women often feel afraid of being attacked in the migrant camp. By LOUISA GOULIAMAKI (AFP)

To escape the war-torn country, she left behind a husband as she took to the road with her parents and two younger sisters.

It took them nearly a year, including a month in a Turkish prison and six or seven attempts to cross from Turkey's coast to Chios island.

"I didn't have a good life in Afghanistan and I don't miss it," she said. "I want a job and education. I want to be a doctor."