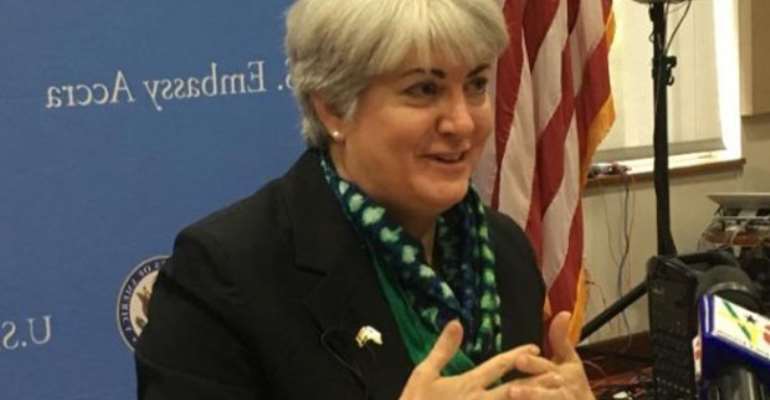 United States Ambassador to Ghana, Stephanie Sullivan, has said sanctions against corruption in Ghana are not deterrent enough.

Ambassador Sullivan made the call on Thursday, December 12, 2019, at a public forum in Accra, saying “strong enforcement leads to strong compliance.”

According to her, citizens occupying positions of authority may be tempted to be corrupt if they know that they can get away with corruption.

The forum which formed part of activities marking the 2019 International Anti-Corruption Day, was held under the theme: “The Cost of Corruption in Ghana – Deliberations For Remedy.”

She revealed that West Africa in 2018 lost an estimated $1.95 billion in illicit fish trade, bemoaning that corruption adversely affect trade and economic growth by scaring away investors.

She therefore urged the empowerment of citizens to fight corruption.

Again, as Ghana prepares for election, she admonished that there should be public engagements on corruption.

Accountable Democratic Institutions and Systems Strengthening (ADISS) Chief of Party, Linda Ofori-Kwafo, observed that recent Afrobarometer findings on corruption in Ghana gave cause for worry despite several efforts made in the past to reduce corruption.

She wondered why the entire country should suffer because few men wants to be rich by foul means.

It brought together Ghana's stakeholders and international partners to deliberate on the real cost of corruption in Ghana and develop proposals to address this cost.

The forum is an event under the Accountable Democratic Institutions and Systems Strengthening.

It is a five-year activity implemented by the consortium comprised of GII, GAAC and SEND, funded by the U.S. government, through the U.S. Agency for International Development (USAID).

The activity seeks to renew and build upon on-going anti-corruption efforts and increase the capacities of anti-corruption civil society organizations (CSOs) to motivate citizens to apply pressure on policy makers and institutions.

Meanwhile, International Relations Director of the National Democratic Congress (NDC) and former Minister of Health, Alex Segbefia, who according to reports was identified as the alleged brain behind some wrongful payment to waste management company owned by Joseph Siaw Agyapong, Zoomlion Ghana, made a pledge on behalf of his party to contribute to fight against corruption whether in power or in opposition.