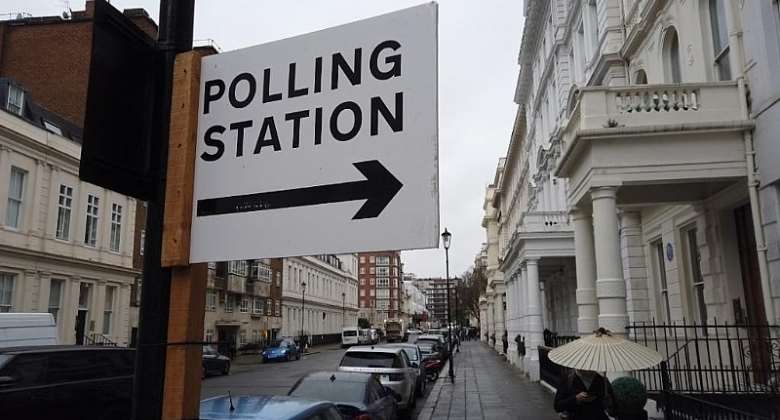 Polling stations opened at 7 am GMT and people quickly flocked to the boots to cast their votes. At stake: the direction of a country that has been virtually rudderless as a result of a paralyzing discussion on whethere or not to leave the European Union.

A long queue is forming inside the lobby of the four star Mornington Hotel that functions as one of the voting stations for London's Labour-held Westminster North constituency, one of the 650 in the UK.

At around 9:30, Will Bippy, a businessman, rushes out into the London drizzle, complaining about the long queue. “I will come back when it is a but quieter”

But he already made up his mind, and it's not Labour he's going to vote for.

“Conservative because I think [Labour leader] Jeremy Corbyn is a lunatic and he will completely bankrupt the country.

Angry
“Even if I don't agree with Brexit, I think that we have to have some resolution and the only way to get that resolution is to vote Conservative,” he says, adding that he doesn't want “another year of dithering and not knowing what to do and if we are leaving or not.”

But Else doesn't agree. She was too young to vote for the June 23, 2016 Brexit referendum, and that made her angry. “It was really hard, especially because it is impacting the future. My future, and it is something I'm very passionate about.

Pro-Remain
She initially thought of voting the pro-Remain Green party, but changed her mind, thinking that a Labour vote would increase the chances of turning back the Brexit tide.

“I think that we just can't survive another five years under the Conservatives,” she says. “We have just seen everything deteriorating. There is a lot of inequality here. I just want the best to win, and anything but Conservative,” she says.

Meanwhile, Sally Gray, who did vote for Labour in previous elections, changed her mind.

She was disappointed in Labour because it didn't enter into “more of an alliance with Remain parties like the Liberal Democrats or the Greens.

Tactical vote
“I just felt they hadn't done enough to earn my vote generally. I'm a really strong Remainer and the Liberal Democrats are the only ones who have consistently supported remain,” she says, pointing out that she didn't want to put in a tactical vote for Corbyn either.

Labour, she thinks, simply can't have a clear stance on Brexit, because “simply because a lot of their support is among northern working class communities where they vote strongly to leave.

"Reluctant" voter
This is illustrated by businessman Richard, who calls himself a “reluctant” voter for the Conservatives.

“I had voted to remain in the EU. A Conservative government obviously wants to go, so there is a conflict, but I think it is time to move on,” he says.

Meanwhile, an elderly lady who gave her name only as "R. Rush” voted “Conservative of course". Absolutely in favor of Brexit.

“I went to school in Paris, I love the Parisians, I love the French, but I don't want to be run by them. So I voted for Brexit. I like Boris Johnson, he's got a wonderful brain. Classical scholar. You know he speaks Greek and Latin. A brain,” she says, before walking off in the drizzle.