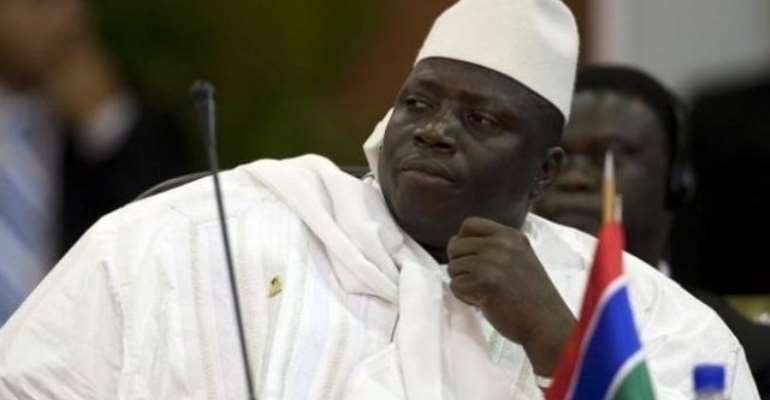 Members of Parliament are pushing for a fresh probe into the execution of some 44 Ghanaians in The Gambia back in 2005.

The renewed calls come on the back of confessions by two Gambian soldiers who admitted to participating in the execution of the Ghanaian nationals on the orders of then Gambian, President Yahya Jammeh.

Lt. Malick Jatta and Cpl. Omar A. Jallow earlier this year revealed to Gambia’s Truth, Reconciliation and Reparations Commission that, the migrants were executed by the “Junglers” squad, a paramilitary force that took orders from Jammeh, across the Gambian border in Senegalese territory.

Member of Parliament for North Tongu, Samuel Okudzeto Ablakwa in a statement on the floor in commemoration of International Human Rights Day urged the house to push for the prosecution of the perpetrators behind the massacre.

“Parliament must urge the government of Ghana to reopen an investigation into the killings with the ultimate aim of bringing those who bare the greatest responsibility for the murder and forced disappearance and torture of our constituents to justice. The unlawful killing violates the provisions in the Universal Declaration of Human Rights on Rights to Life,” Ablakwa said.

Meanwhile, Speaker of Parliament, Prof. Aaron Mike Oquaye, has referred the statement to the Constitutional, Legal and Affairs committee for perusal. The committee is expected to submit a report to the house before the resumption of Parliament.

1. Right Honourable Speaker, I rise to make this statement in commemoration of International Human Rights Day, which is today, December 10. I will like to use this day to urge our Government and all stakeholders to work to actualize the provisions of the Universal Declaration of Human Rights by seeking justice and compensation for the 44 Ghanaian migrants who were massacred in the Gambia in July 2005.

2. Mr. Speaker, as we know, the commemoration of Human Rights Day on December 10 each year followed the adoption of the Universal Declaration of Human Rights by the United Nations on December 10, 1948, a declaration which has become the world standard for the respect, protection, and promotion of human rights. Two years later, on December 4, 1950, the UN General Assembly passed Resolution 423 (V) urging Member States of the UN and non-state actors to adopt and commemorate December 10 each year as Human Rights Day. Ghana is a respected Member of the United Nations and a State Party to several international and regional human rights instruments which derived from the provisions of the Universal Declaration of Human Rights. Indeed the 1992 Constitution of Ghana draws tremendous inspiration from this which reflects in the fundamental human rights provisions in Chapter 5 of our Constitution.

3. Mr. Speaker, some of the core provisions of the Universal Declaration of Human Rights which are especially pertinent to my call on the Government of Ghana and all partners to ensure justice and compensation for the 44 Ghanaians pertain to the provisions in the Universal Declaration of Human Rights on the Right to Life (Article 3); prohibition against torture, cruel, inhuman or degrading treatment (Article 5); prohibition against arbitrary arrest or detention (Article 9), and the right to be given an effective remedy (Article 8) when these rights are violated.

4. Mr. Speaker, this august House played a leading role in demanding information about the circumstances that led to the unlawful killing of 44 of our citizens, brothers, family members, and constituents, when we heard they had been killed in the Gambia on July 23, 2005. I recognize the efforts of all Members of this august House, who played significant roles in ensuring that this matter was kept on the front burner of national discussion, and to His Excellency, the former President, John Agyekum Kufuor, for promptly sending a High Powered Delegation to the Gambia within a week of hearing about the unlawful killing. The Ghana delegation was led by then Minister of Foreign Affairs, who is now our President, His Excellency Nana Addo Dankwa Akufo-Addo. I would be remiss if I did not recognize the untiring efforts of His Excellency, former President John Dramani Mahama, on this matter from when he was the Member of Parliament for Bole Bamboi and Ranking Member of the Committee on Foreign Affairs, Vice-President, and President of Ghana. Civil society organizations led by the Commonwealth Human Rights Initiative, Media Foundation for West Africa and Africa Legal Aid as well as prominent individuals including Nana Oye Lithur, Mr. Akoto Ampaw, and Professor Kwame Karikari also need to be recognized for the key roles they played in this matter. Mr. Speaker, on the unlawful killing of our citizens we have been instructively and commendably united in seeking justice and compensation for the victims and their families.

5. Mr. Speaker in the aftermath of the unlawful killing, Ghana and the Gambia agreed to establish a joint investigative team to investigate the matter; however, following the lack of cooperation by the Government of the Gambia for the establishment of a Ghana-Gambia investigation, ECOWAS and UN established a joint Fact-Finding Team on August 14, 2008 to investigate the 2005 killings. The Fact-Finding Team, which was led by Mr. Curtis Ward, an advisor to the UN, submitted its report on or about April 3, 2009 to ECOWAS and the UN. The report, a copy of which was made available to Ghana, has since not been made public. However, snippets of the report published by the media and the UN DPA stated, among other things, that the Fact-Finding Team absolved the State of Gambia of blame for the unlawful killing, noting that rogue elements acting on their own were responsible for the murder of our citizens. Based on the findings of the Fact-Finding Team, Ghana and the Gambia signed a Memorandum of Understanding on 2nd July, 2009 in Sirte, Libya, under the auspices of ECOWAS and UN. The two countries pledged, among other things, to bring the actual perpetrators of the massacre to justice if new evidence emerges providing a prima facie case against the alleged perpetrators. Following the signing of the MOU, the Gambia provided $500,000 towards the burial expenses, not compensation, of those who were killed and eight bodies were flown to Ghana for burial at the Osu Cemetery.

6. Mr. Speaker, through the work of the Jammeh2Justice Ghana CSO Coalition led by CDD-Ghana, with members comprising Africa Center for International Law and Accountability, Commonwealth Human Rights Initiative, Amnesty International Ghana, among others, and international partners such as Human Rights Watch, TRIAL International, we have learned that our citizens were actually killed by uniformed Gambian soldiers on the orders of Mr. Yahya Jammeh, former president of the Gambia.

7. Right Honorable Speaker, even more significant, three Gambian soldiers admitted in July this year, 2019, to participating in the 2005 execution of the 44 Ghanaians on the orders of Jammeh. Lieutenant Malick Jatta and Corporal Omar A. Jallow revealed to Gambia’s Truth, Reconciliation and Reparations Commission (TRRC) that the migrants were executed by the “Junglers” squad, a paramilitary force that took orders from Jammeh, across the Gambian border in Senegalese territory. “We were told they were mercenaries,” Jatta said, adding that he shot and killed one of the migrants. “I heard people shouting in the forest saying ‘save us Jesus.’” Jallow told the TRRC that Lt Col Solo Bojang, the leader of the operation, told the men that “the order from Yahya Jammeh is that they are all to be executed.”

8. Mr. Speaker, when the Gambia and Ghana signed the MOU, they pledged, among other things, to bring the actual perpetrators of the massacre to justice if new evidence emerges providing a prima facie case against the alleged perpetrators. The three soldiers have confessed to participating in the killing of our citizens and other West African migrants on the orders of Yahya Jammeh and this confession was broadcast live to the world at the ongoing Truth, Reconciliation and Reparations Commission in the Gambia in July this year, 2019.

9. Mr. Speaker, since Ghana and Gambia pledged to bring the actual perpetrators to justice and the soldiers have confessed to murdering our constituents on the orders of Yahya Jammeh, this august House should take keen interest in this matter. Parliament must urge the Government of Ghana to re-open an investigation into the killings with the ultimate aim of bringing those who bear the greatest responsibility for the murder, enforced disappearance and torture of our constituents, to justice. The unlawful killing violates the provisions in the Universal Declaration of Human Rights on the Right to Life (Article 3); prohibition against torture, cruel, inhuman or degrading treatment (Article 5); prohibition against arbitrary arrest or detention (Article 9), and the right to be given an effective remedy (Article 8) when such rights have been violated.

9) In addition, this august House should urge the ECOWAS Commission and Ministry of Foreign Affairs and Regional Integration to release the ECOWAS/UN Fact-Finding Report into the massacre of our brothers, fathers and breadwinners especially in the light of the confessions by the soldiers. The victims and their families also have a right to be provided a copy of the report.

10) Mr. Speaker, as we observe this all-important day - International Human Rights Day; and acknowledging your widely acclaimed human rights credentials, I humbly invite you, respectfully, and at your discretion to issue any further consequencial directives that will assist in securing justice for our 44 compatriots.

11. Right Honourable Speaker, thank you most sincerely for this opportunity.