Investigate The Economic Growth of The NPP Gov't --- Part II 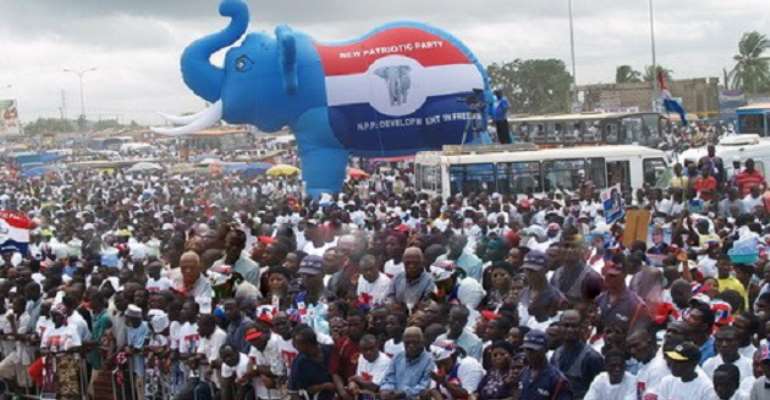 Fellow Ghanaians, I am back to continue with the exposé of the rather dangerous if not phantom competence of the current ruling party: the New Patriotic Party (NPP) I started last week. In its desperate attempt to prove a nonexistent competence, the NPP has decided to charter the path of expansionary fiscal policy that encourages social intervention policies completely against the party's political ideology of liberal democracy! And the silence of Ghanaians is extremely breathtaking!

It is often advised that one must never tell the truth to people who are not worthy of it. I don't know whether it's the reason why all professors of economics in this country have chosen to remain funereally quiet on the obvious battery the current government is causing to Ghana's economy or what?

Before I proceed, consider this. Which of the following guardians or parents are good to entrust your ward with?

A parent who challenges the kid to become better off, and the parent who says to his kid "look, don't do anything. In fact, I will borrow money in your name to cater for all your needs so that you can pay for it later. You don't have to go to school because learning is stressful and I don't want to see you stressed with academics. Just stay at home and be eating and doing what you like"

Supposed you my reader were to entrust your ward with any of these parents, please which parent would you have given your child to to raise for you?

This is the clear difference between the National Democratic Congress, NDC (a responsible government) and the New Patriotic Party, NPP (an irresponsible government that cares only for votes) which is not ashamed to involve in any dirty foul means to getting what they want done!

In this scenario, President John Mahama pursued an economic policy that stressed the Ghanaian citizens in the short-term but had something positive to offer in the long-term.

However, President Akufu Addo said, "look, I would help you get fleeting happiness in the short-term even though you will cry a lot in the long-run. And to the world's amazement, Ghanaians voted for him!

It is the irony of life. Adolf Hitler is quoted to have said that through constant application of propaganda, paradise could be made to look like hell and the vice versa. But Mark Twain said "one of the most striking differences between a cat and a lie is that a cat has only nine lives!"

Suffering has always been nobler in the course of pursuing anything good. Even the Holy Books support it. That's why according to the Christians, even God himself was killed to suffer for the sins of mankind! And the Qur'an says God has created man from the sexual discharges of male and female in order to TRY him, so He has made man hearing and seeing!

Many scholars, both medieval and contemporary, also hold this view. For Charles Dickens, "suffering has been stronger than all other teaching, and has taught me to understand what your heart used to be. I have been bent and broken, but I hope into a better shape." Confucius observed that "the gem cannot be polished without friction, nor man perfected without trials and tribulations." Much the same way, economic development can't be done on a platter of gold and silver!

Again, on his part, Ernest Che Guevara says "it is better to die standing than to live on your knees", and Joseph Stalin culminated and crowned it all when he also said that "Die, but do not retreat."

But you see, when the gods wish to punish us they answer our prayers as Oscar Wilde put it. The change Ghanaians yearned for over eight years had finally come in 2017, but it has proven to be more of a foe than a friend.

Oscar Wilde once mocked that he doesn't want to go to paradise because none of his friends are there.

The breakneck speed at which our economy is said to be growing in the subregion if not in the entire world, is a sort of "paradise" none of our friends in other emerging markets are living in, and we must as well resist with every breath, the attempt to be part of such an awful paradise (of economic growth) the current government is growing.

I would not bore you with a long preamble. For those who did not get to read the episode one of this article, let me do a quick recap and summary of it for you here so that readers can appreciate the argument I'm drumming home as a point.

I tried in the Part One of this article to draw Ghanaians attention to the fact that this so-called economic growth of the government, is neither here nor there. Believe me, it is a complete luck and a miracle, which has been fueled by a reckless, a mindless, and a merciless economic policy known as Expansionary fiscal policy driven by huge capital expenditure mainly through borrowing.

A reason why the government conveniently deserts its party's ideology of liberal democracy that abhors social intervention policies and to adopting ideals of social democracy which the NPP always lambaste.

As a political party that claims to be a liberal democrat, one least expected the NPP to use the expansionary fiscal policy. But because they are hell bent on growing mere figures of economy without positive impact in the life of the citizens in the long-term, they deviate from their party's ideals.

One may ask why the NDC didn't use the same method then. Well, that's where Ghanaians can tell which of the two major parties really care about their well-being.

The NDC in 2013 under president Mahama amidst global economic challenges that shook the economies of various countries, didn't use the expansionary fiscal policy because of the danger that comes with it even though it perfectly aligns with social democracy which the NDC professes as their political ideology. The NDC rather adopted the contractionary policy which is mostly not welcome by citizens of our country's brand, although it was the most effective tonic for the country's economic safety. The NDC didn't care whether Ghanaians will suffer the consequences of using the contractionary policy that takes money away from the citizens or not. They cared for the right thing to be done, and that was why the IMF itself prescribed and endorsed that policy for the country in 2014.

With the expansionary fiscal policy, economic growth is spurred quickly and faster in the short-term but with dire consequences in the long run, especially, when government spends more than the revenue it generates exactly what the current government is doing.

Notwithstanding, as part of the economically immoral attempt to fulfill one aspect of this dangerous policy, the NPP dismissed thousands of Ghanaian workers whom they believed were not their party's apparatchiks, and quickly replaced them with their members as a form of job creation. But, no matter what, there's a difference between job creation and job replacement. The restoration of the allowances, the expansion of the size of government to 123 ministers, the creation of Nabco, and including all social intervention programs undertaken by the current administration, are done at the behest of the expansionary fiscal policy approach to economic growth! Such a scarecrow economic growth has only one term (of government) to live!

One of the major drawbacks of the expansionary fiscal policy, according to Kimberly Amadeo, is that the tax cuts create "asset bubble", and decrease government revenue, which can create a budget deficit that's added to the debt. To pay for the deficit a government must issue new Treasury bills, notes, and bonds.

This is the reason why the economy is growing at the speed of light but with a ballooning and escalating national debt stock! It is the reason why the government is also gasping for breath and issuing new notes, bonds, and treasury bills left right and centre. The latest GH¢ 200 and GH¢100 notes is an eloquent testimony!

Yet, despite all this challenges the government decides to veer off its party's ideology as liberal democrat and jump at the expansionary fiscal policy for the mere pat on its back by Ghanaians, meanwhile, there are consequences waiting.

To appreciate this argument I'm raising, the readers should consider two individuals who want growth in their life economically. One fellow decides to cut down his expenses and increase savings by avoiding unaffordable "slay queens", expensive restaurants, clothes, apartment, luxury cars etc.

The other fellow does the opposite of these things: patronizing most unaffordable slay queens, patronizing most expensive restaurants and riding in the latest Land Cruiser V8 etc. more than the amount of cash he has.

Fellow Ghanaians, which of these two fellows can be prosperous in the future if their source of wealth is mainly from borrowing?

Sure, people would talk about the fellow who wants to chase everything that is in skirt , ride in latest luxury cars, patronize expensive restaurants etc., but he's surely headed towards doom.

Now, assuming you the reader has a choice to allow any of these two people to manage your company called Ghana, and some money has to be borrowed with your life serving as the collateral, which of these two fellows would you have hired?

The above example is a classic case of economic management between the NDC and the NPP. One wants to contain borrowing and working towards savings, and the other wants to borrow to pay allowances and general consumption (slay queens and to patronize expensive chop bars.) That's why the NDC decided to cut down allowances of the nursing and teacher trainees, banned employment and was able to borrow only 40 billion cedis in four years under president Mahama. But, in less than three years the NPP has borrowed over 90 billion cedis!

It is worthy of note that the sole duty of government is to create a safer environment for every citizen to work, fend for themselves, and contribute through taxes to national development. Governance is not to pamper citizens not to work but rather relying on borrowing for everything!

Fellow Ghanaians, our elders say every pot retailer is not in business.

So is every government that encourages citizens to rely on it for jobs, and social intervention programs and yet cutting taxes and increasing subsidies. Like a parent who over pamperes his ward, a government which does that is dangerous!

In fact, such a government has lost touch of the reality of governance, and ought not to be entrusted with the welfare of a country.

Fellow Ghanaians, it is a patriotic duty to vote the country's common foe out of power in 2020, In Shaa Allah. The current government is nothing more than an enemy.