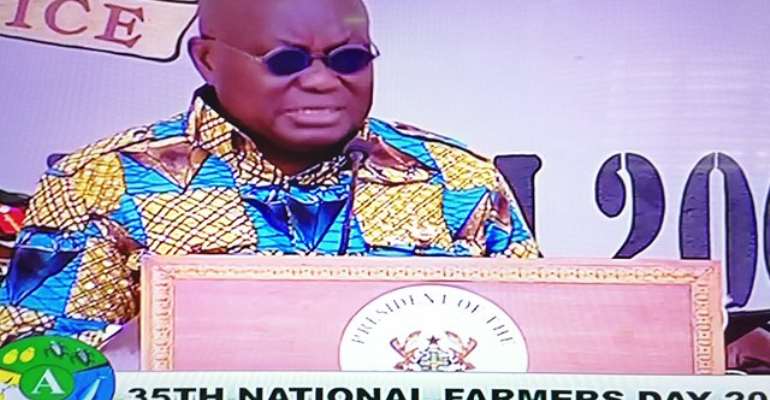 President Akufo-Addo says incentives put in place by his government including the introduction of his party’s flagship ‘planting for food and job’ programs has led to a massive increase in the production of crops in the country.

The president, who was excited about the development said crops like maize and rice have witnessed 89% and 48% increase, respectfully between 2016 and 2018.

President Akufo-Addo added that Metropolitan, Municipal and District Chief Executives across the country have been directed to establish seed gardens from which seedlings will be distributed to farmers.

He added that the government was also in the process of constructing 80 warehouses across the country to prevent post-harvest losses.

“MMDCEs have been given responsibilities to establish seed gardens and produce seedlings to be distributed to farmers all over the country free of charge. The target is to plant enough seedlings over a period of 6 to 7 years to produce exports worth 2 billion dollars per year for each of the seven crops.”

Concluding his speech at the 35th National Farmers day celebration held at the Ho Jubilee Park in the Volta Region, Nana Akufo–Addo urged Ghanaians to consume locally produced foodstuff especially rice, so post-harvest losses by rice farmers will be prevented.

“Rebecca, my beautiful wife and our First Lady insists that we eat local rice at home and has made sure of this. I call on all Ghanaians to follow my example and eat local rice. Let me assure all present that government will continue to prioritise agriculture to make the sector one of the most vibrant in the country.”