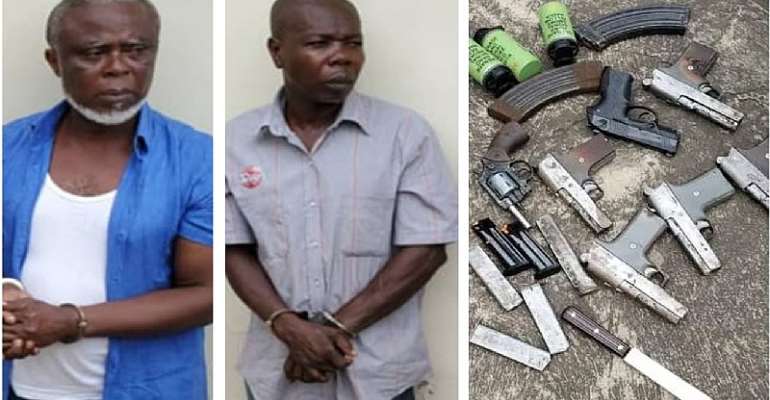 The state is yet to conclude its investigations into the case involving 10 persons arrested in connection with an alleged plot to destabilise the country and topple the Akufo-Addo administration.

The accused persons who are facing charges, including treason felony, are before a Kaneshie District Court where a committal proceeding is taking place for their possible arraignment at a High Court.

Yesterday, all the suspects who are mostly security personnel were brought to the District Court for the committal proceedings amid heavy security escort.

The Proprietor of the Citadel Hospital, Dr. Frederick Yao Mac-Palm, who is a Medical Doctor and believed to be the ring leader; Assistant Commissioner of Police, ACP/Dr. Benjamin Agordzo, as well as a senior officer, Col. Samuel Kojo Gameli were all marched to the courtroom by the escorting officers.

It turned out that the security agencies are yet to conclude their investigations and forward the docket to the Office of the Attorney-General (AG) for advice.

The conclusion of investigations will also help the AG to prepare the Bill of Indictment detailing the charges against each accused person as well as a summary of evidence and exhibits the state intends to rely on for the trial if the accused persons are committed by the District Court.

The prosecution led by ASP Sylvester Asare told the presiding Magistrate Eleanor Barnes-Botchway that they had still not concluded the investigations.

He pleaded with the court to adjourn the case to enable them to carry out thorough investigations but could not give any indications as to when their work would be completed and the docket forwarded to the AG for legal advice.

Victor K. Adawudu, representing Dr. Mac-Palm and some of the other accused persons, earlier inquired from the magistrate whether the prosecution had filed the bill of indictment but the magistrate said she does not have anything on the records.

Provisionally, all the accused persons are facing five counts of treason felony, conspiracy, treason, abetment of treason felony and possession of explosives and ammunition without lawful excuse.

Their pleas have not been taken as the charges are indictable offences and the proper trial has to be conducted at the High Court.

They were all remanded by the court into police and military custody as the police said they were 'far advanced' with their investigations. According to ASP Asare, the prosecution required a few weeks to get their house in order.

“We say that in the coming weeks, we shall indicate to this court our intention to commence the committal proceedings,” he had said in court.

One of the suspects, ACP Dr. Benjamin Agordzo, who is senior police officer, was at the last sitting released to the custody of the Inspector General of Police (IGP) on the orders of the court.

His lawyer Martin Kpebu had told the court that there is convention in the police service where senior officers who find themselves in such situations are released to the IGP for custody.

Other accused persons being tried in connection with the alleged coup plot are Donya Kafui, aka Ezor, a local weapon manufacturer (blacksmith) from Alavanyo, and Bright Allan Debrah Ofosu, aka BB or ADC, both civilians.

We Won't Use Your Money To Buy Akonfem — Akufo-Addo Vibes Bu...
54 minutes ago