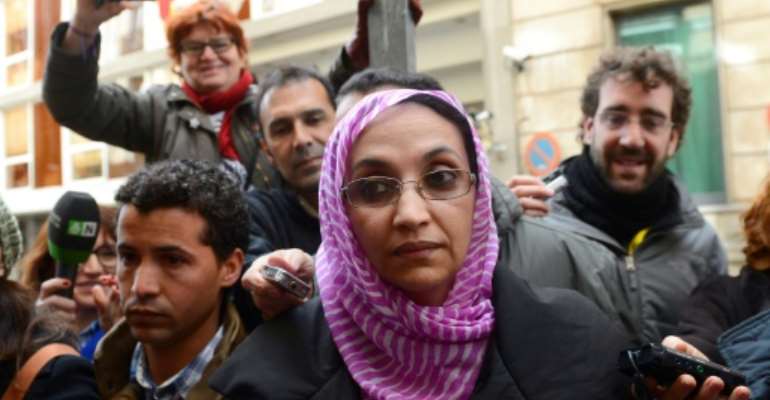 Aminatou Haidar, a champion of peaceful resistance to Morocco's annexation of Western Sahara, is demanding urgent international action to prevent the frozen conflict from devolving into war.

The 52-year-old Sahrawi human rights activist, who on Wednesday will receive a top human rights award in Stockholm, said she feared that youth in the disputed region have given up hope of achieving self-rule through non-violent means.

"The international community must act without wasting any more time, because the young people have no more patience. They no longer believe in peaceful resistance," Haidar told AFP in Geneva last week.

The activist, dubbed the "Gandhi of Western Sahara", insisted that the United Nations, Europe, and France and Spain in particular had a responsibility to "avoid war" in the region.

Morocco annexed the Western Sahara in 1975 following the withdrawal of colonial power Spain in the dying days of right-wing dictator Francisco Franco's regime, sparking a war with the Algeria-backed Polisario Front movement.

The two sides agreed to a ceasefire in 1991, and a UN mission was deployed to monitor the truce and prepare a referendum on Western Sahara's independence from Morocco, but it never materialised.

The UN peacekeeping force (MINURSO) of 240 Blue Helmets is charged with monitoring the nearly three-decade-old ceasefire.

After a long break, the UN-led dialogue between Morocco, the Polisario Front, Algeria and Mauritania resumed in Switzerland in December 2018, followed by a second round in March, without achieving a breakthrough.

The Polisario Front is demanding a referendum on independence for Western Sahara, which Morocco has rejected.

Rabat considers Western Sahara integral to the kingdom and has said it will not accept anything beyond autonomy for the resource-rich territory.

Haidar lamented that in the nearly three decades since the Polisario Front lay down its arms, Morocco and the international community have largely ignored the people's non-violent demands for justice, dignity and self-rule.

She warned that the last round of unfruitful talks had left Sahrawi youth especially disillusioned.

"They are angry, and they are frustrated... They say that the international community only acts in conflicts where there is blood and violence," she said, describing how she and other advocates of non-violent resistance had become the targets of insults.

More worrying, she said, "they are pressuring the Polisario Front to pick up their arms again."

The activist slammed the international community for lacking the political will to enforce various UN resolutions and international court rulings that the Sahrawi people should have a say on the independence question.

"This is due to the complicity of some international powers," Haidar said.

"Spain is responsible, and France is responsible," she said, also slamming the European Union for blindly supporting Morocco, in part out of its desire to retain access to resources in the territory.

"Without European support, Morocco could not pillage and exploit the natural resources, and it could not continue its occupation and to ignore all of the Security Council resolutions," Haidar said.

Haidar, who says she is deeply honoured by being likened to Gandhi, reaffirmed her commitment to non-violence.

She has stuck by non-violence since she was a teenager, despite facing beatings, alleged torture and detention without charge or trial.

She says she was thrown into a secret prison when she was just 20, spending four years there in total isolation.

After her release in 1991 at the time of the truce she continued her activism, despite constant police surveillance.

In 2005, she was severely beaten and injured by police during a demonstration before being sent back to prison, where she carried out two hunger strikes protesting against mistreatment and arbitrary detention.

Thanks to US pressure, she was able to travel to Spain after her 2006 release, and she set out on an advocacy tour through Europe, the United States and South Africa, winning several prestigious rights prizes.

But the mother of two was denied entry when she wanted to return in 2009, and Morocco confiscated her passport and deported her to the Spanish Canary Islands.

In response, she launched a month-long hunger strike that grabbed headlines, before she was eventually allowed to return to Western Sahara.

Haidar meanwhile stressed that her "case is not unique".

"This is the case of all Sahrawi people today... We face ferocious repression on a daily basis," she said.

"This is a question of decolonisation," she said. "I will never give up my people's fight."

Haidar will on Wednesday receive the Right Livelihood Award, sometimes referred to as the Nobel Prize for human rights, which also counts three other laureates this year, including Swedish climate activist Greta Thunberg.