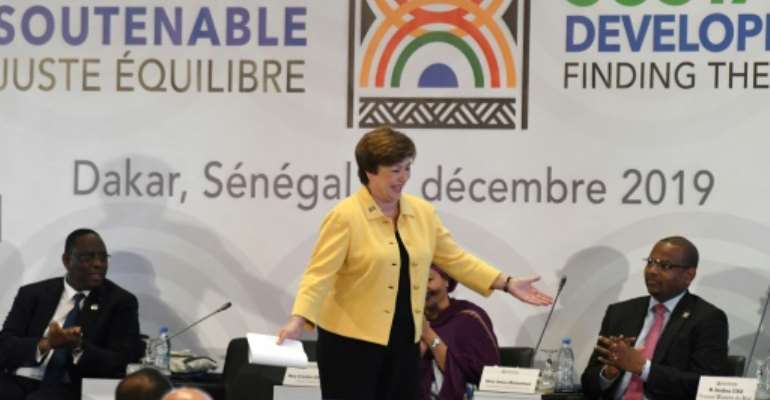 "We have to dispel the perceived riskiness of investment" in Africa, Georgieva said. By SEYLLOU (AFP)

New International Monetary Fund chief Kristalina Georgieva on Monday highlighted Africa as a lure for investment as she kicked off her maiden visit to the continent, but urged leaders to be smart on debt management.

Africa has made "tremendous improvements", the IMF managing director said at a conference near the Senegalese capital Dakar on sustainability and debt.

"As a result, over the past two decades, extreme poverty levels have declined by one-third, life expectancy has increased by a fifth and real per capita income has grown by about 50 percent," she said.

"We have not been able to communicate sufficiently Africa as an investment destination," she added.

"We have to dispel the perceived riskiness of investment in the region," she said, emphasising that the key to this was "providing more up-to-date data."

But she also pointed to Africa's challenges, including demographic growth that would require up to 13 million new jobs each year, and the impact of climate change.

To increase social spending and to create the right conditions to attract investment requires money, and this raises the question of debt as a financing tool, she said.

"Borrowing does make sense if it is done wisely, if it finances projects that can boost productivity and living standards, if it materialises on the ground (with) more roads... more airports, more schools, more hospitals, more opportunities."

But, she said: "Room for borrowing in the region is not endless," pointing to a surge in borrowing at commercial rates by many countries in the region.

State indebtedness has spiked as a result, although it has recently stabilised, Georgieva noted.

Georgieva also chided rich countries, which have pledged to provide 0.7 percent of their GDP in support for development.

"We are not there, by a long mile, we are still at around only 0.2 percent," she added.

After taking office in October, Georgieva last month warned that global debt, both public and private, had surged to an all-time high of $188 trillion, "about 230 percent of world output."