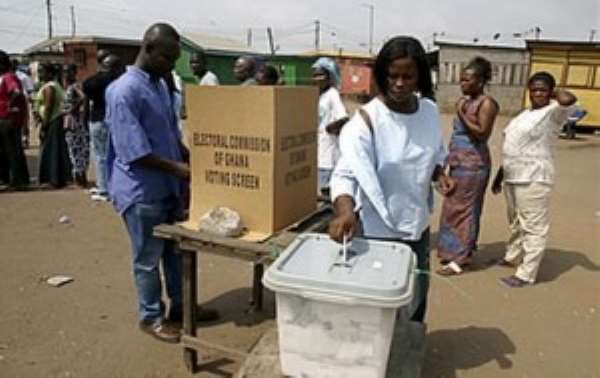 There is an old testament scripture which I would begin with this piece; Job 38:7; “When the morning stars sang together, and all the sons of God shouted for joy?”. I have chosen this scriptural reference to write on an issue that is critical to this country. Ghana has been touted as “the beckon of democracy in Africa” because of its relatively stable political stability under its fourth republic.

Is there any developmental correlation between what has been advertised to the outside world and the reality in the country? "When the cry for the return to democracy came about, many people shouted for joy”. Has the return to democracy brought any joy, nor has it brought about its downfall? For this purpose, I have chosen to write on how democracy under the fourth republican constitution has collapsed and retarded Ghana’s growth.

Ghana is one of the most endowed countries in Sub Saharan Africa with human and natural resources. In one of Prof. Adu Boahene's lectures, he stated "And Ghana is indeed endowed. Her material resources are second to none; her soil and climate are ideal to produce every conceivable tropical and savanna crop; her mineral resources of gold, diamond, bauxite, manganese, and possibly oil are the envy of many countries. Her human resources are unparalleled in Africa. She has the highest literacy rate, the best-trained manpower and the largest professional elite in West Africa” (“The Ghanaian Sphinx” 1987; page 2). In addition to the numerous blessings which Prof.Adu Boahene enumerates is that Ghana is the first country to attain independence in West Africa on 6th March 1957. One expects some form of development with the many resources that we have, but this is not the case.

Ghana, after attaining independence, has gone through some form of political instability and is currently under its fourth republic. 1960 to 1965 saw her first republic, under its first president Dr Kwame Nkrumah, who was overthrown by general Joseph Arthur Ankrah and his cohorts when Nkrumah was on an assignment in Vietnam. The second republic was under prime Minister Prof. K.A Busia from 1969 to 1972 before he was also overthrown by Ignatius Kutu Acheampong from 1972 to 1978. There was another interruption by lieutenant general Kwasi Akuffo and later from Flight Lieutenant Jerry John Rawlings. An election was scheduled in 1979 which Dr Hilla Liman won and ushered Ghana into the third republic. Then later J.J Rawlings launched his second coming by staging another coup on 31st December 1981. The period between 1981 to the early 1990s was when Ghana was under the “dark age” with all the powers and authorities of the state being controlled and manipulated by one person. Then there was another crusade for Ghana to return to a democratic regime.

On 28th April, 1992, there was a referendum in Ghana to determine whether Ghana should return to a democratic regime and adopt a new constitution. "Of the 8,253,690 registered voters, 3,689,974 representing 43.7% voted. There was massive support for the adoption of the constitution. 3,408,119 representing 92.6% voted yes while the remaining 272,855 (7.4%) voted against” (A.K.D Frempong, “Elections in Ghana” 1951-2016; page 140). Even though the turn-out of registered voters was low, yet you can see that those who participated voted to support the return of democracy. There were many factors which accounted for this massive vote but one of the major reasons was the fact that power had been in the hands of one person (or a few people) and there was no form of accountability in the country. There was no respect for human rights.

Under this fourth republic, Ghana have had presidents come and go, but if we look at the state of development in the country, there is little improvement. The return to constitutional rule in 1992 and afterwards has polarized this country. The sharp division in which the country found herself, left no decency in our body politics. It was expected that after Ghana once again entered into democracy, the country would turn on the right path to development, but this is not the case. The politics of the National Democratic Congress (NDC) and the New Patriotic Party (NPP) have impoverished Ghana. We know the rate of development which Ghana went during the time of Dr Kwame Nkrumah when Ghana was a de-facto one-party state and later a de-jure one-party state.

One major collapse as a result of democracy in Ghana under this current regime is about the level of inconsistency and discontinuity of projects and developmental agenda by both NDC and NPP. Political parties before every election have their manifestos and as such would want to fulfil all those manifesto promises before they exit office. Whenever I see these things, my mind quickly goes back to the days of Nkrumah and the kind of consistency Ghana had in terms of development, and if you juxtapose it with today then you can see that the country is doomed.

Before president Kufuor left office in 2009, he built some affordable houses, but when the NDC government came into office they left them unattended and most of them are still not completed. What has happened to the University of Ghana's Medical Centre (UGMC)? John Mahama's administration’s effort to expand the health sector embarked on the building of numerous healthcare facilities including UGMC but when Akufo-Addo's government came into power most of these health facilities are still unused. These political parties do not want to give credit to their political opponents because of their political self-interest.

The division which this country has fallen into is a big challenge, and we need to be concerned as citizens. Today, there is no objective political thinking in this country. Every opposition party wants the government of the day to fail, so they can capitalize on it. Even the media, which is supposed to be a neutral referee, has put on the cloth of these political parties. I have always asked that if these advanced countries have practiced this form of mediocre democracy, would they have been where they are today? Positions are given to persons who can insult and lie. What we have today is not “Ghana First, But Party First” forgetting that these political parties met Ghana. There is no loyalty in the system, and no integrity by politicians. The most annoying thing is that they find pleasure in lying and stealing from the state coffers. If you and I do not stand and defend this country from the hands of these greedy individuals, then we stand the chance of killing the country before the next generation.

This form of division has crept into parliament, where an NDC member of parliament (MP) will not agree to an NPP MP even when the need arises. Instead of MPs being loyal to their constituents and the people they serve, no! They are more loyal to their political parties. Meanwhile, taxpayers’ money are used to pay them every month. I have always asked myself, what kind of laws are these divided minds enacting for this country?

The winner takes all politics has also left Ghana under-developed. In a country where the constitution has empowered the president to appoint heads of all relevant institutions and ministers of state. If you do not belong to the party in power, you will not get any position of influence regardless of your qualification. I think as a developing country if we continue such trends, we are “digging our own grave”. We must not allow incompetent people to occupy positions and mess up the system. No party will have a hundred per cent qualified people in their administration. We are wasting talents in the country. Instead of us harnessing the competence and expertise of all Ghanaians, we have made politics divided us. In the days of Nkrumah, we had one plan, and the human resources were being put into proper use.

“The big men” (politicians) have hidden under democracy to impoverish their citizens while they enrich themselves and their family members. Where did we go wrong as a country? Have we chosen blindly? Is democracy the system of government that Ghana should adopt? One thing I know for sure is that; the country has lost focus and has no national agenda. If we are a legitimate country, we would have laid down some plan that would have forced all political parties to draw their political manifestos in line with the blueprint that we have. We have left the issue ajar to these greedy people, and they are tossing the destiny and future of the unborn generation.

In paraphrasing Job 38: 7 "When the call came to return to a democratic dispensation, many people in Ghana shouted for joy". Has the democracy that we practice given us the joy we envisaged?

Do we as a country prefer a de-jure one-party state where the constitution can check the powers of the leader, so we can have a focused plan? With the numerous resources both human and natural that we have and with the level of development that we have, we can see that our leaders are destroying and failing our country.

Are we doomed forever? I do not think so. This piece is a wakeup call to all thoughtful Ghanaians to rise and defend their country. For us to develop, let’s have a national agenda that will curtail these political parties from manipulating the system. “: The spirit of Ghana First” should precede our party interest. The constitution should be given a second look and we should amend all the laws which are hindering the development of the country. We need a blueprint which will direct us irrespective of the party in power.

This article was inspired by Mr. Emmanuel Asante and written by YOUNG POSITIVIST. The issue needs critical attention to change the dynamics of our country. Anytime I think of Rwanda, I think of President Paul Kagame and the kinds of developmental projects being initiated by him. I must say that Rwanda has a more visionary political leader than we have in our country. Let’s do the rethinking and put Ghana on the right path. I am not sure that this is what Nkrumah and the people who fought tirelessly for this country wished. Ghana must work again. Ghana will work again. YOUNG POSITIVIST, a concerned citizen of Ghana.