Are The French Losing Their Colonial Grip On Francophone African Nations? 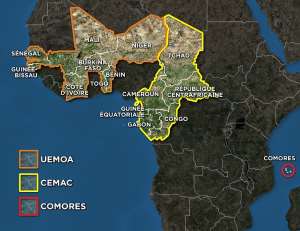 Despite liberation from France over half a century ago, France has maintained its colonial hold on Francophone nations through its control of the CFA franc currency. It appears France’s grip is loosening with actions led by the President of Benin, Patrice Talon. Without control of one’s own currency no African nation can be truly sovereign. Ambassador Arikana Chihombori-Quao has been relentlessly campaigning for the French to end their modern day colonialism, which requires Francophone nations to use the CFA franc and deposit their reserves in Paris banks. Amb Chihombori, who was the African Union’s ambassador to the United States, was dismissed without cause last month. Many of her supporters believe that it was pressure from France that forced her to be discharged from her post in Washington.

Francophone nations in West Africa, former French colonies, want more control over the management of their currencies and plan to move some reserves from France, said Benin President Patrice Talon.

The eight member-nations of the West African Economic and Monetary Union “unanimously agree” on ending a decade-old model whereby their foreign-exchange accumulation is kept at the French Treasury, Talon said in an interview with Radio France Internationale (RFI). Their currency, the CFA franc, is pegged to the euro, and its convertibility is guaranteed by the former colonial ruler.

Established after World War II, the discussion of the use of the CFA franc frequently triggers debate about the region’s continued economic dependence on France and the view that the currency is artificially strong and curbs the region’s competitiveness. Its supporters cite the region’s low inflation and the currency’s stability relative to other African nations as reasons for its continued use.

“I can’t give you the date, but the willingness of everyone is already there,” Talon said in response to to French Finance Minister Bruno Le Maire’s openness to a reform of the currency. “Psychologically, with regards to the vision of sovereignty and managing your own money, it’s not good that this model continues.”

The regional central bank will manage the reserves and distribute them to partners around the world, including Japan, Europe, China, and North America, said Talon. Ivory Coast, with an economy of about $40 billion, is the biggest among the users of the CFA franc in West Africa. In addition to the eight West African nations, six other nations in the Central African Economic and Monetary Union also use the same model.