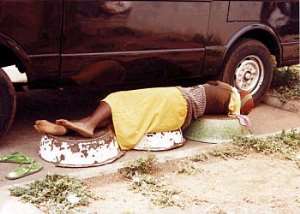 The government has directed ministries, departments and agencies to cede five per cent of their total budgetary allocation to a National Employment Task Force as part of efforts to address the crippling unemployment problem in the country.

“This task force will act as an employer of last resort for all those maturing entrants into the labour market who cannot immediately find regular paid jobs in the private or public sectors but whose time and energy can be usefully harnessed towards achieving important social goals, such as cleaning up the festering pollution of our urban environment and reinforcing public security,” the Senior Minister, Mr J.H. Mensah, has disclosed.

The move, according to him, was a partial guarantee against the scourge of unemployment, especially graduate unemployment, among the youth.

Mr Mensah, who announced this at the 2006 Congregation of the University of Ghana, Legon last Saturday, however, noted that the initiative carried the risk of maladministration, welfare dependancy and eventual unsustainability.

He said the country's economic advisors never liked the initiative, especially its donor partners, adding that “the consequences of the alternative of inaction on youth unemployment are much worse”.

“This nation cannot afford to nurture and feed generation after generation of youngsters who have not learnt the culture of steady, disciplined work day after day.

Especially, we do not want this to happen in relation to the rising number of youngsters in whose education the nation and parents have invested precious time and money,” he said.

Mr Mensah said following the launching of the educational reform, the government had decided to formulate and implement a comprehensive National Human Resource Development Project which would be the corollary of the newly-declared objective of the nation's overall economic policy.

Commenting on the examination scandal that hit the university last year, the Senior Minister said indiscipline, fraud, chicanery and any other act that had the potential of destroying the integrity of the university would not be countenanced in any way, whether it be on the part of students, staff or faculty.

Mr Mensah said the government had followed with keen interest, without interfering, the steps being taken by the University Council, the management and academic board to repair the damage that had affected the image of the university.

“Let nobody misunderstand the ultimate social responsibility and the resolute will of the government to protect and enhance the academic and moral standing of Legon as the premier institution of university education in Ghana.

I urge the university to be resolute, unwavering and swift in its resolve to repair the damage that has been undoubtedly done by the misconduct and laxity of various senior and junior members of the academic community of Legon,” he stated.

The Chairman of the University Council, Dr Ishmael Yamson, said the council had set up a panel of distinguished local and international scholars and university administrators to undertake a visitation of the university.

The panel, he said, would review the academic programmes, staff recruitment and standards, physical infrastructure, financial resources and the administrative structure of the university.

The acting Vice-Chancellor, Professor C.N.B. Tagoe, called on the government to help the university to attract younger teaching staff, since it continued to lose its academic staff mostly through retirement, saying that presently only about 19 per cent of the staff were under 40 years, while about 34 per cent were between 40 and 49 years and about 47 per cent above 50 years.

In all 5,806 students graduated at various levels of academic pursuit.

A minute's silence was observed in honour of the late Oyeeman Wereko Ampem, the former Chancellor of the university.

Students of affiliated instutions, such as the Ghana Institute of Journalism (GIJ), the National Film and Television Institute (NAFTI), among others, also graduated.