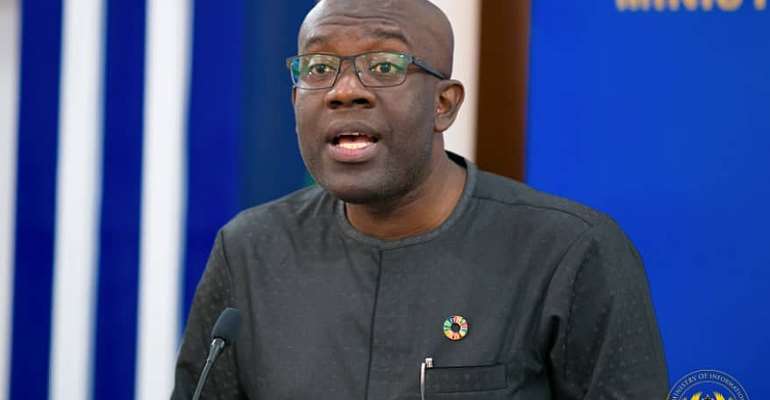 The Minister for Information, Kojo Oppong Nkrumah has disclosed that President Akufo-Addo will on Monday 4th November 2019 resume his national tours as he is expected to pay a one-day working visit to the people of the Volta Region.

According to him, the President will kick off the tour in Ho Central with a meeting with the Regional Security Council.

Addressing the media at a Meet-The-Press in Accra, the Information Minister said "He will then depart to Adaklu and Akatsi to inspect infrastructure projects and also attend the 30th Anniversary of the Akatsi District Assembly. President Akufo-Addo will then grace a durbar of the Chiefs and people of Aflao".

He added that on Tuesday 5th November, the President will interact with some students and tutors of selected senior high schools in Ho, and Vakpo.

Hon. Oppong Nkrumah added that the President will also attend durbars in Dzolokpuita, Kpeve and commission a dormitory block at the Vakpo Senior High School.

He emphasized that President Akufo-Addo will also visit the Volta Star Textiles and lay foundation stone for railway before departing to Accra.

"These regional tours by President Akufo-Addo are aimed at giving him an opportunity to hear first-hand from the people and observe for himself the progress of work".

Speaking on the benefit from $103 million electrification project, the Information Minister noted that 582 Communities in five regions are expected to benefit from a 103-million-dollar electrification agreement between the Government of Ghana through the Energy Ministry and the China International Water and Electric Corporation.

He stated that Cabinet has given approval for the projects in the five regions which are Ashanti, Bono, Eastern, Volta and Western Regions, a phase two of the initial 1,033 communities.

"The phase one project was earmarked to connect 495 communities in 15 Districts of the Ashanti, Eastern, Volta and Western Regions which is about 90 percent complete with 441 communities already connected to the national grid".

The Minister also stated that monies for phase 2 will be used to finance the supply and reception of electrical materials and equipment for the electrification projects in these communities.

He revealed that the agreement is part of government’s National Electrification Scheme since 1990 which is aimed at reducing poverty, especially in rural areas, increasing the overall socio-economic development of the nation and enhancing the activities in other sectors of the economy such as Agriculture, Health, Education and Tourism.

It is emerging that the scope of the project includes design, manufacture, delivery, installation, testing and commissioning, as well as handing over of the electrification project to the beneficiary communities. The project is to be completed in years from Commencement date.

The Information Minister added that the scheme will also create jobs in the rural areas, thus reducing the rate of rural to urban migration and most importantly contribute significantly towards the achievement of universal access to electricity, a minimum of 90% by 2020.

He highlighted that four (4) Ministries are spearheading this project.

He said "They include Works and Housing, Sanitation and Water Resources, Zongo Development and Local Government.

Among their respective roles, the Works and Housing will use its share of the fund to handle drainage of key water outlets including the Odaw River while the Sanitation Ministry will be responsible for the construction of transfer stations and landfill sites".

The Minister of Information also added that the project is expected to improve flood risk management and solid waste management in the Odaw River Basin of the Greater Accra Region.

He mentioned that it will also improve access to basic infrastructure and services in the targeted communities within the basin.

Hon. Oppong Nkrumah said since flooding events often leads to the loss of lives and damage to property, the project will therefore mitigate the impact of floods thereby enhancing economic and social development.

"Solid waste management which has also been a major sanitation hurdle for government will be improved under the project. About 500,000 people from low income communities will benefit from solid waste collection and final disposal capacity improvements" .

He mentioned that on a larger scale some of the expected outcomes include improved Solid Waste Management, improved basic infrastructure and services in Targeted communities.

He noted that it will also serve as an annual grant to targeted MMDAs for the enhancement of revenue strategies, improvement of municipal finance and budgeting, and capacity development.

He was confident that the indiscriminate dumping of refuse and the plastic waste menace will also be controlled resulting in the reduction of solid waste that ends up in the ocean also known as marine litter.

The Minister of Information mentioned that Ghana will mark the National Youth Day on Friday 1st November 2019.

He said "The day is set aside by the Africa Union Commission to promote an increased awareness and recognition of young Africans as critical agents of positive change.

In Ghana, the National Youth Authority, the government agency mandated to regulate and coordinate Youth Development activities is marking the celebration with series of activities on the theme “Ghana Beyond Aid; The Youth Factor” stemming from the vision of President Akufo-Addo.