A Trip To Seme-Krake: Mending The Cracks In The Benin-Nigeria Trade Relationship 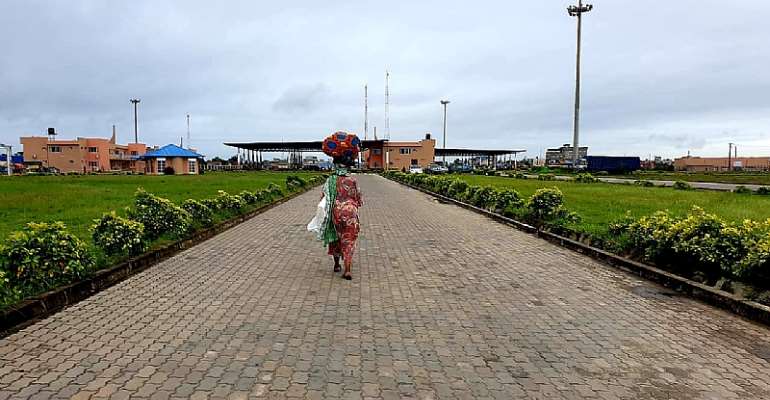 On 21 August this year, the Seme-Krake border between Nigeria and Benin was closed without prior notice. This was part of a broader crackdown by the Nigerian authorities to close all land borders between Nigeria and it’s neighbouring countries. Today, over two months later, the border remains closed, with vehicles piled up on either side. Border closures are all too familiar at Seme-Krake, but this is reportedly the longest closure in about forty years.

This mammoth closure reflects deep fractions in the cross-border trading system. The cracks at Seme-Krake are particularly deep since the border feeds the ECOWAS Abidjan-Lagos Corridor.

According to sources at the border, the main purpose of the closure is to put a stop to smuggling of contraband goods from Benin, which is compromising Nigeria’s agricultural policies, job creation, revenue collection and security.

The smuggling of rice is particularly contentious. In fact, rice is first on a long list of contraband goods issued by the Nigerian authorities. The country has invested significant resources in expanding rice production, but these efforts are undermined by smuggling from Benin. The rice entering is smuggled because it is not produced in Benin. It is sourced from outside the ECOWAS region and therefore does not meet the rules of origin requirements to qualify for duty-free treatment. Benin imports rice from outside ECOWAS at cheaper tariffs than Nigeria, and this rice enters Nigeria through unofficial routes and is then sold at below market prices.

A single trip to the Seme-Krake border and surrounding trade routes is enough to verify that smuggling is a very real problem, that requires targeted treatment. The blanket closure of the border to all trade is, however, not the right medicine.

This is because, since the establishment of ECOWAS in 1975, the region has made significant strides in regional integration. The fifteen ECOWAS member countries have become one interdependent system. The Seme-Krake border closure thus has significant knock-on effects.

First, the border closure blocks the trade of every single good, not just contraband goods such as rice and frozen poultry. This is based on the ground that trucks entering Nigeria are not adhering to the ECOWAS Convention relating to inter-state road transit of goods, which requires all goods to be containerised and sealed at the point of origin until the final destination. The Nigerian government has kept its seaports and airports open for non-contraband imports, as they are reported to have the scanning facilities necessary to inspect all imported goods. But this is not a realistic alternative for most traders. Key staple agricultural commodities such as maize, wheat and cassava, which qualify for duty-free status within ECOWAS, are therefore no longer being traded in either direction. This has negative ramifications for income generation and food security. It also calls into question the entire functioning of the ECOWAS Trade Liberalisation Scheme (ETLS). The visit to Seme-Krake verified that the majority of the backlog of trucks on the Benin side of the border are carrying goods that are non-contraband and not imported from outside of Benin. A female trader with 9 seized coconut trucks complained that her trade had been held up for two months, which has created huge unforeseen costs and unrecoverable losses.

Second, regional integration has facilitated the development of cross-border regional value chains. Much of the goods sourced from Benin are raw agricultural goods, some of which are used to feed Nigeria’s growing agro-processing industry. This means that the land border closure may in fact eventually defeat its main objective to support agro-industry and employment. Without agricultural goods crossing the border from Benin, the supply of inputs for agro-processing will be lower, resulting in higher costs of production. Taking the only option of re-routing to seaports or airports will similarly translate into higher costs of production for Nigerian industries.

Third, hard border infrastructure hides the strong and indestructible linkages and bonds between border communities on either side of Seme-Krake. This has given rise to a microeconomy that thrives on informal cross border trade. This trade is small-scale, fluid and not subject to official border crossing procedures. Unlike large consignments of formal trade, women moving with heavy loads of plantain and fabrics on their heads still cross the border. Yet, this is not without challenge. The time taken to cross the border has more than doubled, and harassment by customs officials has increased significantly. Rolling out the recently piloted ECOWAS National Biometric Identity Card to all cross border communities would help to identify traders originating close to the borders, who may not have passports or other official means of identification.

Fourth, Nigeria holds the title of the biggest supplier of traded goods along the Abidjan-Lagos corridor. The closure of the Seme-Krake border has cut off the origin and supply of many semi-processed and manufactured products to cross-border markets in Benin, Togo, Ghana and Cote d’Ivoire. The United Nations Economic Commission for Africa (ECA), African Export Import Bank (AFREXIMBANK) and Eastern Africa Grain Council (EAGC) are currently carrying out a pilot informal cross border trade data collection exercise along the corridor. Border communities and customs officials engaged in the process speak to the significant impact the Seme-Krake border closure is having on volumes and prices of goods traded both informally and formally along the corridor. Some referred to this as a “chain effect” resulting from the interconnectedness of ECOWAS economies. If Nigeria’s land borders are not re-opened soon, it’s neighbouring countries may look to alternative suppliers to fill the current gaps created by the closure. If this happens, even when the border reopens, it may be too late for Nigerian suppliers to regain their market share. This would certainly be a big shot in the foot.

If a blanket closure of the Seme-Krake border is not the correct medicine to mend the cracks in the Benin-Nigeria trade relationship, what is the appropriate remedy? Smuggling along unofficial trade routes has significantly reduced, but as highlighted in this article, this has not been at a small cost.

Instead, the main complaint of smuggling must be tackled through specific and targeted measures. The Nigerian government are urging Benin to sign an agreement that commits the country not to import goods that are onwardly smuggled. However, effective enforcement of such an agreement would require the deployment of security forces from both countries along the entire length of the porous border. This would be a worthwhile exercise, but not a cheap one. A more cost-effective treatment and one in the spirit of furthering regional integration would be to fully-implement the ECOWAS Common External Tariff that officially entered into force in 2015. This would mean that all externally imported goods would face the same tariff in Benin and Nigeria. This would go a long way to eliminating the unfair price differentials which currently incentivise smuggling. At the same time, governments must continue to invest heavily in transforming agriculture with a view to boosting local production and competitiveness. This will remove the need to resort to trade policy measures to remain competitive.

Finally, the cracks at the Seme-Krake border have surfaced due to much deeper cracks in the implementation of ECOWAS trade policy. For effective functioning of the ETLS, the Nigerian and Beninois customs authorities must cooperate to enforce the ETLS, including through joint operations at the border. If start of trading under the African Continental Free Trade Area (AfCFTA), from 1st July 2020 is to work, strong political commitment and reliable institutional arrangements to keep the continent’s 107 land borders open will be critical.

David Luke is the Coordinator of the African Trade Policy Centre at the United Nations Economic Commission for Africa, based in Addis Ababa, Ethiopia

Gerald Masila is the Executive Director of the Eastern Africa Grain Council, based in Nairobi, Kenya

More Article
Modern Ghana Links
Drums of war were beating for almost two years. Why Ethiopia's conflict was avoidable
The Nonsense of John Mahama’s Free SHS
Why Uganda must recognise nurses for more than a decade of HIV care
Nurses are playing a bigger role than ever in the fight against HIV – they deserve more support
Why it's important to keep diagnosing and treating HIV during the COVID-19 pandemic
Battles won – and lost – against AIDS hold valuable lessons for managing COVID-19
Managing HIV and diabetes together: South African patients tell their stories
How theatre can help young Nigerians who are living with HIV
Daytime sightings of elusive aardvarks hint at troubled times in the Kalahari
Dossiers Quotes Coronavirus
TOP STORIES