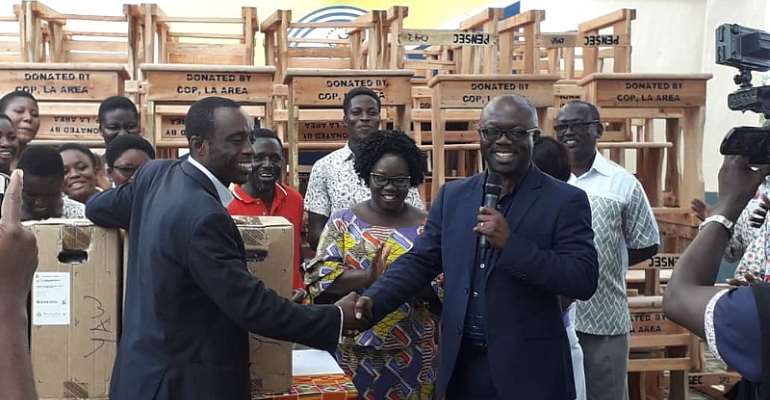 The Headmaster of Pentecost Senior High School, Mr. Peter Atta Gyamfi has heaped praises on leaders of the Church of Pentecost for their consistent support towards the school.

The immense support from the leaders towards the Koforidua based Pentecost SHS has tightened their scope in order to enhance teaching and learning which has indeed contributed to the great performance of the students.

Mr. Peter Atta Gyamfi made these remarks when the La Area of The Church of Pentecost, led by Apostle John Osei Amaniampong, donated 103 mono desks and 20 desktop computers to the Pentecost Senior High School (PENSEC) in Koforidua.

The Headmaster, Mr. Peter Atta Gyamfi, was full of appreciation to the La Area and Elder Amo Tobbin for the kind gesture.

He said the donation was timely because of the ever-increasing students’ enrolment which has put some stress on their limited facilities.

Mr Gyamfi added that the Koforidua Area of the Church also donated a set of dining hall benches and tables.

He said the General Headquarters of the Church is also putting up a 2-story boy’s dormitory block for the school.

He indicated that, when the government absorbed the school into the public system in 2015, the school’s population was then 155, but currently, enrolment has increased to 1,915.

Mr Gyamfi stressed that the Ghana Education Service has moved the school from Category D to A, making it one of the top schools in the country following its sterling academic achievements in recent times.

He disclosed that out of the 731 candidates who wrote the 2019 West African Senior School Certificate Examination (WASSCE), 546 passed in all subjects, representing 74.79%. He revealed that some of the subjects such as Physics, Chemistry, Business Management, Economics and ICT (Elective) recorded a 100% pass.