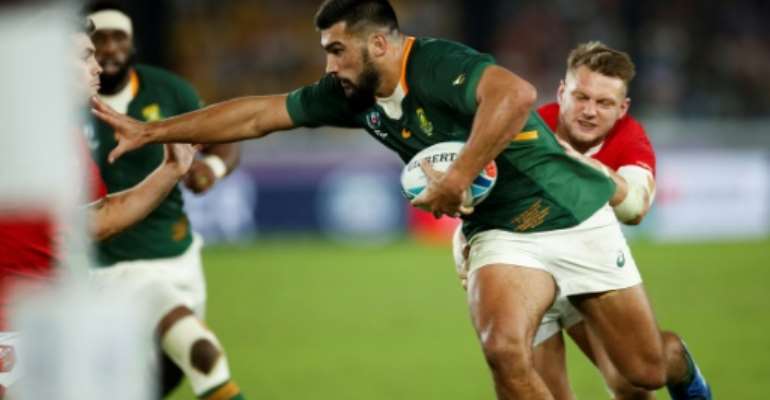 The Rugby World Cup final between England and South Africa will not be won by an expansive gameplan and "wonderful tries", Springbok coach Rassie Erasmus said after his side battled to a 19-16 semi-final victory over Wales on Sunday.

The last-four clash against the Six Nations champions in Yokohama was an ugly affair, featuring 31 set pieces and the ball being kicked an incredible 81 times during play.

Wales coach Warren Gatland said he believed South Africa could beat England in the final, although he added that they might need to be more expansive.

"That's good that he thinks we can go all the way, that's great!" Erasmus reacted.

"He's right, there are definitely some areas in our game which must improve.

Erasmus added: "They're obviously much better than the last time we played them, you could see that the way they dismantled New Zealand" in a dominant 19-7 semi-final victory on Saturday.

"We're in a with a chance," he continued. "I don't think the final will be won by a very expansive gameplan with wonderful tries.

After four straight losses to Wales since their last victory over them in the quarter-finals of the 2015 tournament, Erasmus said his team also knew what to expect from the Welsh in Yokohama.

The former Munster coach said they understood "they know how to close out Tests, we learned some lessons".

"When we analysed them, the way they won the Six Nations, they're a team that strangle the opposition and today we expected exactly that and that's what we received the whole game.

"We had to match that, it probably was not the best spectacle to watch, but the boys stuck to their guns and adapted to that."

Erasmus, who has transformed South African rugby since taking over last year, said an increased level of professionalism adopted by top-level players and coaches has been behind the country's improvement.

"We've always had potential in South Africa to be a force in world rugby," he said. "Even in 2015 when we lost to Japan, we still played in the semi-final against New Zealand and lost by two points.

"We're always there or thereabouts."

Erasmus credited players with "taking ownership of what it means to be a professional rugby player" to maximise their potential.

"It's slowly spreading through provinces and franchises. The whole level of mediocrity is slowly going out of our rugby.

"We don't have the money that England have, but we definitely have the player pool," he said.

"Let's see how the final goes to see if we've turned the corner as much as we wanted to."

Springbok skipper Siya Kolisi praised Erasmus for changing the mindset around being an international.

"He knows us and he's here to pull us together and we're to buy into his plan," said Kolisi, appointed by Erasmus as South Africa's first black captain.

"As soon as he came, he made it clear that a Springbok is the most important thing. In the past most of us tried to build ourselves on social media and he brought us back to earth and told us you have to play well first and everything else will come."

Bawumia to deliver keynote address at Nottingham University ...
6 minutes ago