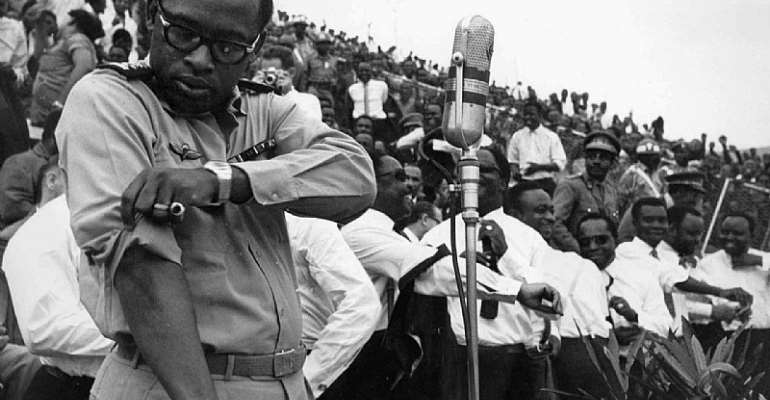 Still rolling up his shirt, Joseph-Désiré Mobutu turns to his listeners. They listen to him attentively because Mobutu is the new strong man in the Democratic Republic of Congo. On November 24, 1965, with the support of the CIA, the officer put himself in power and overthrew the legitimate President Joseph Kasavubu.

No blood was shed, as Mobutu does not tire of emphasizing. But that is not all, Mobutu has opponents eliminated in order to consolidate and maintain his power or corrupt them. The Democratic Republic of Congo is not only one of Africa's largest states, it is also rich in natural resources. However, the enormous sums flowing into the country hardly benefit the population. They were not invested in schools and hospitals, instead Mobutu establishes a kleptocracy.

He lived in a frenzy, with a concorde plane he hurries to Europe for dental treatment, another plane brings him the tons of necessary luggage. He maintains numerous palaces and noble estates, his prestige palace in Gbadolite in the north of the country is mocked as "Versailles in the jungle".

The Americans tolerate Mobutu's hustle and bustle. For that they want the mineral resources of the equator state, on the other hand the dictator Mobutu proves to be a faithful vassal in the Cold War. In Zaire, as he soon renamed the Democratic Republic of Congo, he ruled autocratically, raising "mobutism" to the rank of a religion.

Consequently, every newborn child automatically becomes a member of the state party. Mobutu himself shows himself only with a cap made of the fur of a leopard, praises himself as the "leopard man". Through corruption and incompetence Mobutu and his followers ruin the country, in the nineties the tyrant and was finally overthrown. In 1997 Mobutu dies of cancer in his Moroccan exile.

06.07.1967: When the Biafra war shook the world...Chukwuemeka Odumegwu Ojukwu 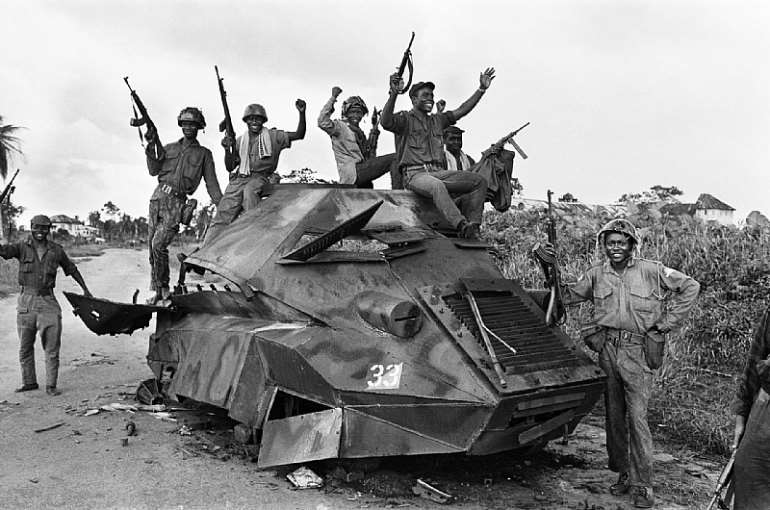 06.07.1967: When the Biafra war shook the world...Chukwuemeka Odumegwu Ojukwu

Cheering, these soldiers of the Republic of Biafra put their weapons up in the air, they fight for the independence of this region in the south of Nigeria. Nigeria has been in a civil war since 6 July 1967.

Chukwuemeka Odumegwu Ojukwu, the military governor of Biafraas, had previously declared independence to the province. Nigeria, which had become independent of Great Britain in 1960, transformed itself from a country of hope into a crisis state. The reasons for the war are multiple, there are many conflicts among the ethnic groups living in Nigeria.

In 1966, officers coughed from the ranks of the Christian Igbo, who mainly live in Biafra, and soon there was a counter coup by officers from the predominantly Muslim north of the country. Many thousands of deaths were the result of these conflicts. When rich oil deposits were discovered in the Biafra region, the dispute led to the declaration of independence of the region. A famine there was the consequence, the pictures of starving children shake the world. In mid-January 1970, the conflict finally ended with the defeat of Biafras. According to estimates, he claimed about one million lives. 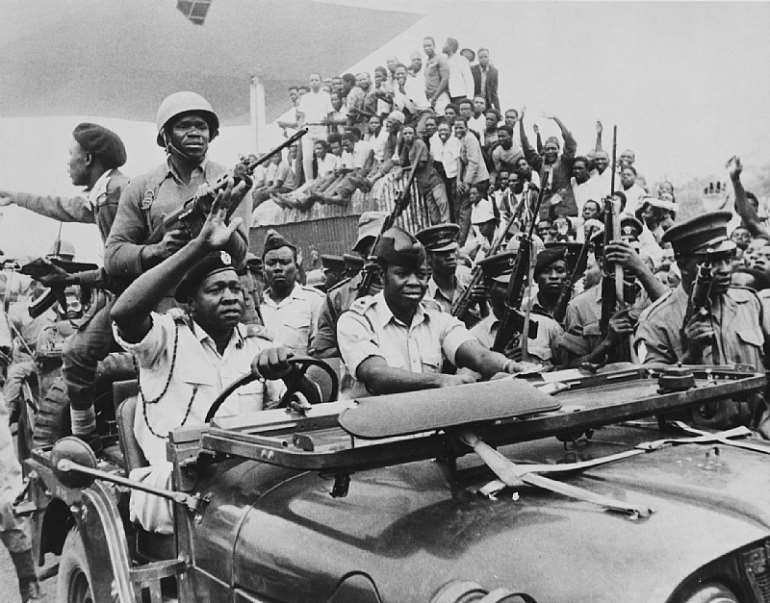 Heavily armed men escort Idi Amin (at the wheel) through the streets of Kampala on 25 January 1971. But they do not use their weapons, Amin has put himself in power in the absence of the actual autocratic head of state Milton Obote. The seizure of power is bloodless, but this cannot be said for Amin's eight-year reign. The former British colonial officer, assistant cook and boxer establishes a reign of terror in Uganda.

Opponents of the regime, or people Amin considers to be such, are arrested, tortured and killed. Death squads are marching through the country on behalf of the military ruler. In the West, however, Amin is ridiculed for his megalomania, the potentate has a penchant for extravagant uniforms, orders and titles. He can be described not only as a field marshal, but also as a doctor. Although he was unacquainted with reading and writing.

The English became the special target of Amin's macabre sense of humour, he called himself the "last king of Scotland". But Amin is particularly proud of his reputation as a merciless dictator, boasting himself of cannibalism. In the West, stories are gradually circulating about the horror in Uganda, and even other dictators are beginning to avoid Amin.

Meanwhile, the Ugandan economy is collapsing completely because the dictator following an alleged divine inspiration, is throwing tens of thousands of Indians out of the country. And thus a central economic pillar of Uganda. To divert attention from the problems, Amin orders the 1978 attack on neighboring Tanzania. But the Tanzanian troops are superior, in spring 1979 they march into Kampala. Amin flees to Saudi Arabia. He never had to answer for his crimes, which cost the lives of more than 300,000 people. Amin died in exile in 2003. 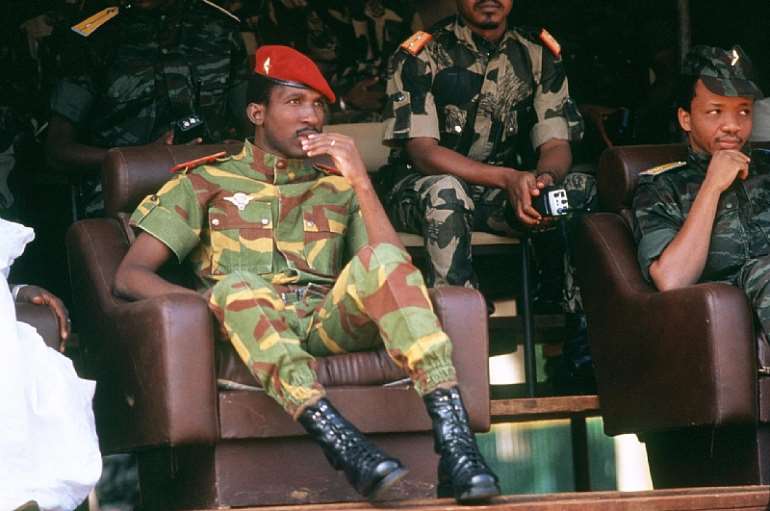 In uniform, Thomas Sankara (red beret) took a troop parade in 1985 in Ouagadougou, capital of the African state of Burkina-Faso. The officer has ruled the bitterly poor country for two years and came to power in a bloodless coup. While other potentates such as Zaire's dictator Mobutu are plundering their states, Sankara has other plans. He is pushing through reforms, fighting corruption in the country. For example, his ministers receive cheap Renault instead of luxury cars as official cars. The socialist Sankara promotes equal rights, fills many posts with women and bans genital mutilation. At the same time he declares war on imperialism and causes concern in the West when he calls on the African states to stop paying their debts. The country's economy also wants to strengthen Sankara by supporting small businesses. For many people in Burkina-Faso and throughout Africa, Sankara thus becomes a bearer of hope. On the other hand, Burkina Faso's president is also highly controversial. For Sankara governs authoritarian, other parties as well as trade unions are forbidden under his rule. Last but not least, the coup maker is also waging a war with Mali over a border area. How Sankara's policy would have changed Burkina-Faso in the long term is ultimately left to speculation. On October 15, 1987, he was murdered in another coup. His successor largely withdrew Sankara's reforms. 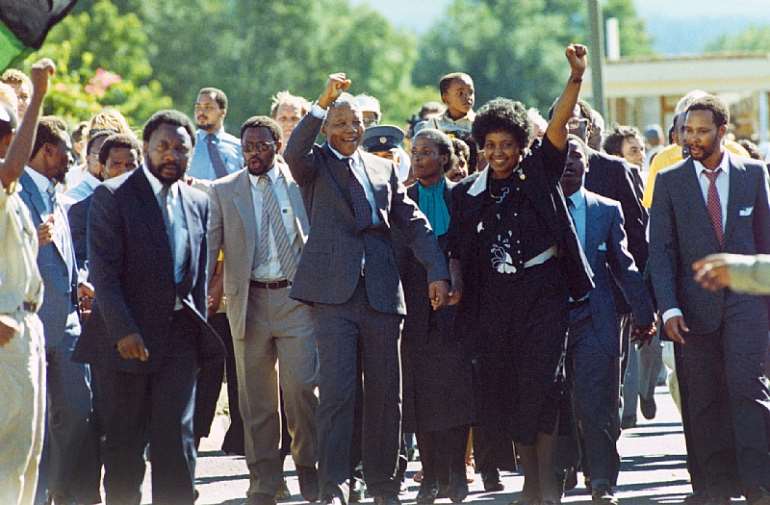 Happily he stretches up the raised fist. And Nelson Mandela (center) really has reason for joy on February 11, 1990. For he is now a free man. The South African fighter against apartheid had spent more than 10,000 days of his life in prisons and is revered by many people around the world as an icon of human rights. Mandela had changed in prison. Once he had stood up for the armed struggle against the white oppression regime, then he turned into a man of peace and understanding.

When he left prison in February 1990, he wanted to speak to his numerous supporters, but they did not let him. They cheer the once most famous political prisoner in the world almost endlessly. Then Mandela expresses in his speech the modesty for which he is so popular. "I do not stand here as a prophet, but as your humble servant". In 1994 Mandela took office as South Africa's first black president, always committed to the goal of reconciliation between blacks and whites. 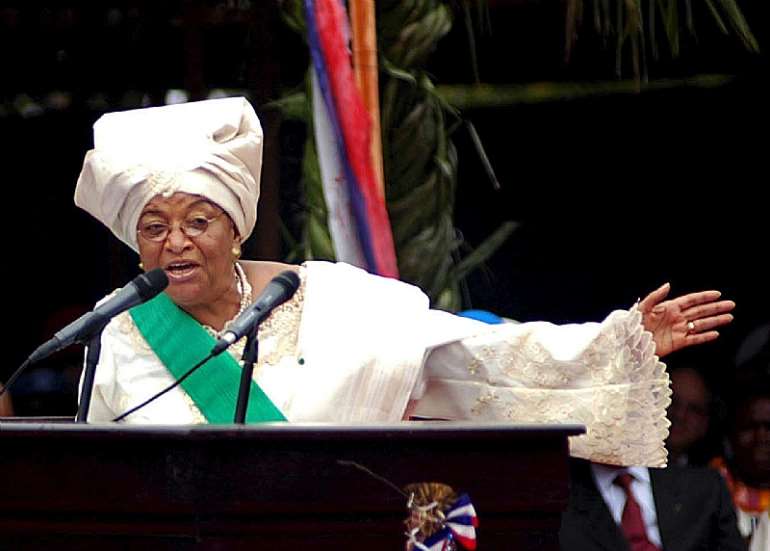 For more than 150 years only men had dominated Liberia, once founded by former slaves from the USA, then the unexpected happens on 16 January 2006. In the capital Monrovia, Ellen Johnson Sirleaf is sworn in as president. The economist trained at Harvard in America is the first woman to be elected to the highest office of state on the African continent.

Sirleaf is facing great challenges
Liberia is poor, more than ten years of civil war have devastated the country, hundreds of thousands of people have died or become invalids. The country needs law and order as well as stable social and economic conditions. In her inauguration speech, Sirleaf, whose grandfather came from Germany, also addresses another terrible legacy of the civil war...mass sexual violence against women. Sirleaf promises to work especially for women's rights during her term of office.

Sirleaf, known as the "Iron Lady" and two other women were awarded the Nobel Peace Prize in 2011. In the same year they re-elected the Liberian to the presidency. In the West, however, Sirleaf, who rule until 2018, soon causes indignation by defending the prosecution of homosexuals in her country.