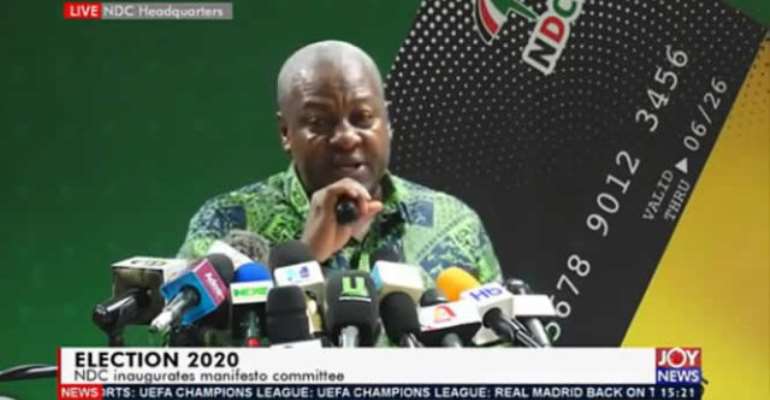 Describing the government as a sinking ship, Mahama said his party feels the suffering of the ordinary Ghanaian in the series of scandals bedeviled the Akufo-Addo mal-administration.

Former President John Mahama, who lost power in the 2016 polls after one-term, said he has learnt some “useful lessons” since his exit and has also been gathering “effective feedback” from stakeholders.

He said he has had consultative meetings with the University Teachers Association of Ghana (UTAG), Ghana Medical Association (GMA), traditional authorities and the various religious groups and organisation.

Laying down his expectations of the 21-member manifesto committee, Mahama said the document should be a “working and organic manifesto that is by the people and for the people.”

He said the manifesto should be a “sacred working contract with Ghanaians,” and “practical which at a glance states in clear and simple terms” what Ghanaians can expect from a future NDC government.

After explaining what the manifesto should be, he turned to explain what it should not be.

It should not be a document of “insincere promises” and convenient pledges such as the New Patriotic Party (NPP)’s 2016 manifesto, he said.

“We in the NDC will not lie to Ghanaians” he took a swipe at Akufo-Addo government.

Mahama lamented that after tasting three years of the Akufo-Addo government, some Ghanaians are losing faith in democracy and are beginning to consign themselves to apathy using quips such as “politicians are the same”, "it is no use voting".

The government, he said, has taken its sacred social contract with Ghanaians for granted and have become “deeply demoralised” because promises have turned out to be a “grand deception.”

He said the 2020 general election could either “consolidate the faith of our people in republican democracy or shatter it for good.”

“We are coming to give you hope” Mahama described the NDC’s mission in 2020.