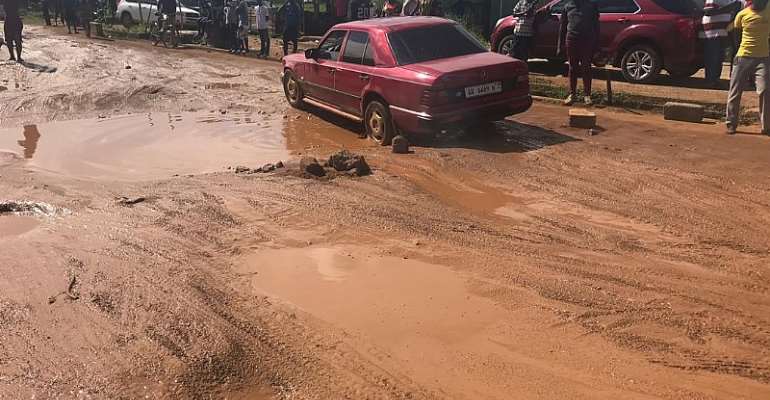 Drivers of public transport vehicles known as 'trotro' within the Ablekuma Manhean, Oduma, Nsakina and adjoining communities in the Ga West Municipality of the Greater Accra Region are on a sit-down strike over deplorable roads.

The drivers' protest follows the numerous complains they have made concerning the bad nature of the road – and to mount pressure on the appropriate authorities to fix the deplorable roads.

This situation has forced many residents in the affected areas to walk long distances to board vehicles to their various workplaces.

Some of the unhappy residents who spoke to Citi News‘ Philip Nii Lartey said they want something drastic to be done.

“The situation is bad. Somewhere last year around this time, the youth demonstrated and some of them were even arrested. The large potholes alone are a problem. As a resident, I think something needs to be done about it. It is only during elections that they promise that a contract has been awarded to a contractor. This is very bad and frustrating so I think the authorities need to do something.”

“The nature of the road is very bad. Sometimes, you spend one hour for a five minutes drive. Pregnant women going to the hospital are affected so we are pleading with the government in fixing the road. We have not seen any improvement that is why we are protesting”, another resident said.

Samuel Afrifa, a leader of the drivers who was stopping other drivers who defied the order also shared in the plights of residents.

“I am stopping them because of the lack of maintenance. We are paying all the taxes but look at the road here. So we the commercial drivers are embarking on this protest until someone comes to tell us something convincing. How many times should we tell them to fix the roads.”

In the past, some residents had staged a series of fierce protests against the government over the dilapidated state of their roads.

In a number of occasions, they burnt vehicles tyres and blocked major roads, making human and vehicular movements impossible.