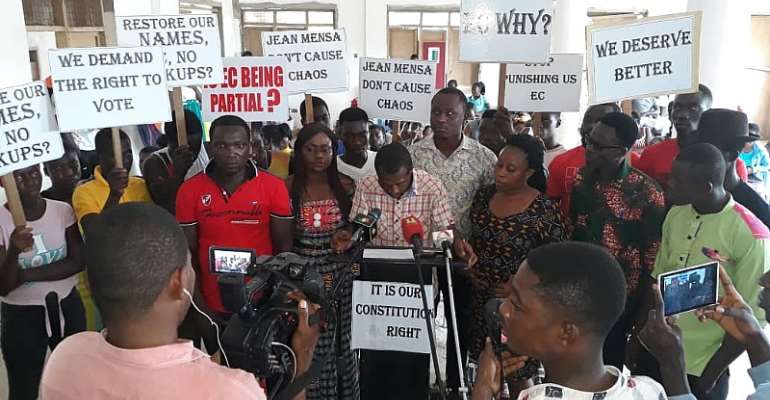 They are claiming names of the five thousand electorates have been deleted from the country’s voters register.

Speaking at a press conference organized on Wednesday, October 16, 2019, at Nkroful in the Ellembelle Constituency of Western Region to press home demand for restoration of their names, the leadership of the aggrieved group, challenged government to investigate the issue.

Spokesperson of the group, Kwesi Hanson wondered why the names of many electorates in the constituency could not be traced in the voter register.

He claimed names of the five thousand electorates have been deleted from the country’s voters register, and that it was only detected during the recent voter exhibition exercise conducted by the Electoral Commission.

The leadership of the aggrieved group, said Anyinase North, the cocoa growing area in the constituency and parts of the southern belt of Essiama, Anyinase, suffered badly from this problem.

The spokesperson challenged government to investigate the issue and impress upon the EC boss to reopen the voter register in that constituency or restore the names of all those who couldn’t find their names in the register.

He said the group would want government to cause investigation into circumstances surrounding the issue before the impending local Assembly elections.

The apokesperson of the group, Kwesi Hanson explained that officials of the Electoral Commission at the local level appeared uncooperative in handling the matter following an attempt made to get them (officials) in the Ellembelle District to respond to their plight.

He threatened that the group would be compelled by circumstances to place an injunction on the impending local Assembly elections.

He appealed to the President, Nana Addo Dankwa Akufo-Addo, members of the council of state, national chairman of New Patriotic Party, Freddie Blay, and other stakeholders in government to intervene in the matter.

The leadership of the group visited the Ellembelle District Office of the Electoral Commission to present a petition, but no official was ready to receive the petition.