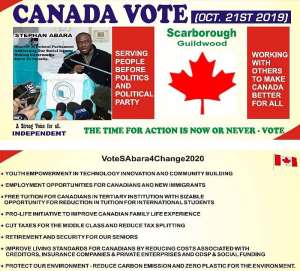 As the Canadian federal election for parliamentarians scheduled to take place on October 21, 2019 draws near, Dave Madder, one the city's most successful community leaders and former municipal Councillor candidate (Fmr.) has endorsed the candidature of Stephen Abara, a Nigeria-Canadian based citizen for the federal parliamentary election in Scabourough-Guild wood (ward 24) and federal electoral district Ontario Canada.

In a statement signed and made available to journalists by Mr. Dave Madder, Stephen’s official campaign agent explained that Stephen Abara had spent his entire career working to keep the neighbourhoods and families of Ontarians safe from crime and violence for the last 10 years.

“During his career he has proven his commitment to social justice, education and community service and engagement working for the well being of Senior Citizens as founder and President, 'Friends of Seniors organization' as Senate Committee Member for Admission, Student Services and Appeal, York University, while raising awareness of the Canadian Justice system to not only put criminals off our streets, but out of Canadian jails through proper education of the young, canvassing for family spiritual and moral upbringing and uplifment. I can think of no other candidate more qualified to serve as Scarborough's -Guild wood next Member of Parliament (MP) than Senior Business Analyst, Executive Coach, Author, Playwright, and Poet Stephen Abara.”

Dave Madder made the above remarks at brief meeting of community leaders and upcoming political candidates’ forum in the Scarborough Guild wood, ward 24 Federal District.

“I am honoured to have the support of Mr. Dave Madder for my campaign, and other pro-life groups in the city," said Independent candidate for Member of Parliament MP, Stephen Abara, adding that Dave and his family has long been a staple of Scarborough Guild wood’s civic life.

“While other community leaders and activists have shifted their operations elsewhere living the city behind for greener pastures, Dave has remained here, working with and for numerous organizations for the last 30 years. I cannot thank Mr. Dave enough for his support" Abara noted.

Mr. Abara has got what it takes to take the federal district to a new dimension in politics. He has come to serve you and not to answer a politician but a 'public servant' for the poor, the rich and wealthy and for the middle class.

Dave Madder who described Mr. Abara as the 'new face' in politics said the independent Member of Parliament (MP) Candidate is “a man with extra ordinaries gifts and capacity to lead the young and old in the new 21 century Scarborough Guild wood politics for change. A dynamic leader and community 'politician' well educated, versed in literature and philosophy, who has transverse Europe, America, Africa and willing to explore more of Asia, Caribbean nations, Middle East and many more seeking and creating avenues for business and trade relations for Canada if elected.”

Continuing he said: “His leadership style and qualities is dynamic and inclusive rather than exclusive as most politicians of our time. He's experienced and multi-talented in engaging the youths into politics for the betterment of the country, and for reduction of crimes and criminal activities in the city. He has got a blue print for reduction of gun violence in the city and crime reduction as well. Backing him for the office would be the best you can do for the city.

“You candidate, Stephen Abara is well versed in community organization leadership and other political engagements. He was a 'two Tenured Senator for Admissions, Appeals, Recruitment and Student services for a multi-disciplinary University -York University Toronto Canada where he served more than '50,000' students both as a student union leader, student founding Director, and first President of a University Organization that has catered for many International and local students in the last 13 years at the University. Presently a volunteer visitor and community organizers and activist in the city of Scarborough Guild wood working in team with the Storefront organizations activities Hanging in the Hub celebrating the Seniors, Friends of Seniors Ontario Festival Inc, Advisory Committee member for Scarborough Healthy Community organization, KGO Cooking class for community, KGO Theatre group headed by Mr. Doug, Soccer and Basket ball Coach for Sports4Change TOURNAMENTS for KGO Grade 1-12 kids, Co-Chair Voice of Scarborough, Knights of St Columbus, visitor to Huron Park Gathering of Families, Climate Action Group member, and many others past and present. He has received honorary awards in Poetry and for his education in Canada, and is very ready to serve you as your public servant in the capacity of Member of Parliament for 2019-2020 election seasons.

“Elect him for his strong and equitable policies and stance for alleviation of poverty through tax breaks for middle income earners and businesses, increase in Affordable Housing for low income, increase in health care benefits to include prescription of some high end illnesses, clean energy and environment and immediate action on Global warming, Increase in Pension and Annuity for Seniors/reduction in age for pensioners to '55' instead of 65 years, Free education for all Citizens and reduction in International Tuition expenses to accommodate more brains in the society who will take Canada to the next manpower heights, increase in industry and affordable- room in house for less privileged to avoid overcrowded homeless on the streets, and finally but most importantly reduction in Abortion (a pro-life stance). He joins other candidate in the Scarborough—Guild wood race, John McKay (MP for last 13 years, Quintus Thuraisingham, Kelvin Clarke, Michelle Spencer, Tara McMahon, Jignaben Jani, Paul Coulbec.”

“Be the voice of change for the present and the future of your unborn children. Give him a chance, and watch a new way of politics in GTA Ottawa and greater scaborough area” Dave Madder canvassed

The author has 149 publications published on Modern Ghana.